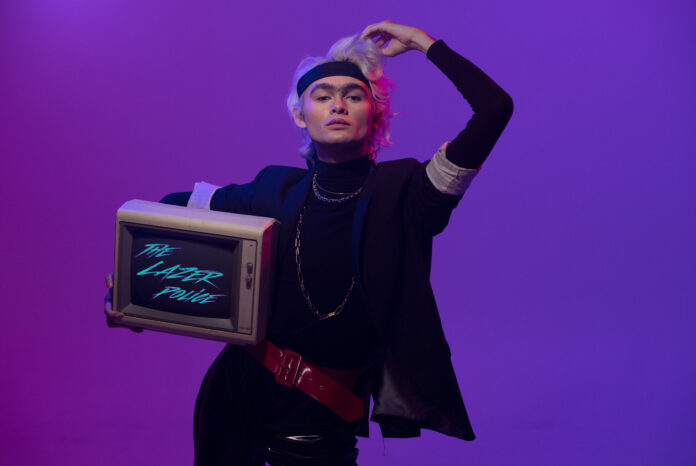 LGBTQ+ icon and singer-songwriter Callum Crighton is the artist that needs to be at the top of your list to check out.

Armed with vibrance and energy, this self-producing performer specialises in electronic pop music destined to leave you weak at the knees. Returning with exceptional debut EP “Lazer Police: The Musical”,

Callum’s forthcoming release will be out June 4th. The title track of the EP, which is out now, has already received praise from ‘Spotify’s Fresh Finds: Pop’ playlist, been featured on the radio in Merseyside, and the music video has already gained over 32,000 views.

I headlined a summer festival at Liverpool’s Bombed Out Church and the crowd was ELECTRIC! So many friends, family and fans showed up and it confirmed that this was definitely what I wanted to do for the rest of my life.

‘Lets all Chant’ by The Michael Zager Band. Such an infectious fun song, makes me feel like I’m a cult leader in the late 70s and trying to uplift everyone with this weird music. Definitely considering recording a cover at some point!

Where do I begin?! I do a killer New York accent, I’m the only person I’d ever trust to give an accurate palm reading, I bleach and tone all my friends hair (weirdly well considering I’ve no training), I make a KILLA sangria, and I’m the best therapist you’ll ever have. Oh and I can also twist my arms and legs around and climb up walls…

I’d have much more diversity. There’s too many straight white men running the show and its disheartening to see. I’d love to have a wider representation, and I’d love to see more women running the show! Women are incredible and they’re absolutely not taken seriously enough in our industry. I work exclusively with women, queer people, and people of colour when I produce my music, make my videos, and come up with concepts, because nobody else seems to be doing it!

If you could open for any band act who would it be?

I’d love to open for Marina! I tried so hard on her last tour and ended up chatting to her manager about it but I just couldn’t get through in the end. I don’t think I was established enough back then but I’m definitely on my way to getting there! How amazing would it be to open for someone that has shaped your whole journey as a music artist? It would be such a full circle moment.

My Instagram is @callumcrighton and I’m always updating my followers with weird little videos and stories. I also have merch coming soon for the EP! Keep an eye out for Tote bags, badges, and an electric purple cassette tape with a bonus track on it!

Talk us through the new track video

The new EP has one long music video for all 4 of the songs. Lazer Police: The Musical; loosely tells the story of a boy in the 80’s that gets pulled into his television screen and is swept up in a whirlwind of madness! Expect glitter, fog, and even… murder!