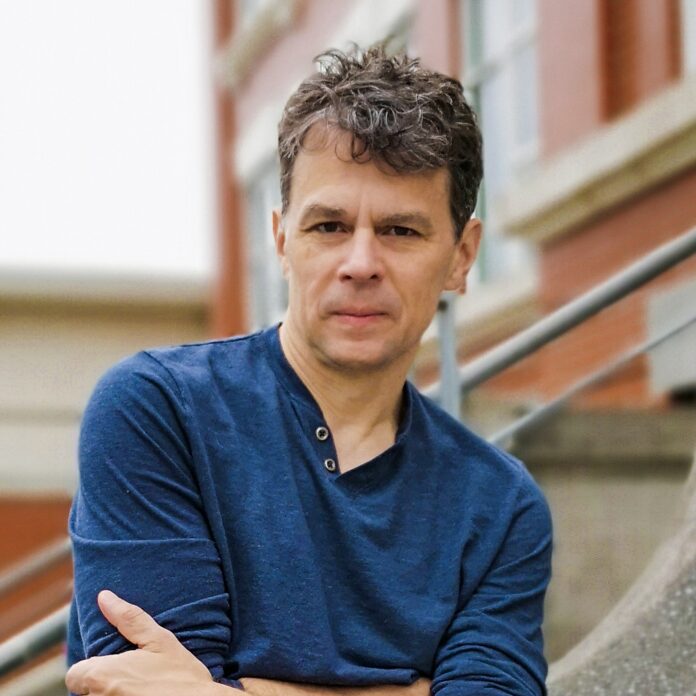 Vancouver, Canada based artist Rich Chambers has a musical story unlike any other. Redefining soft rock and 60’s rock to create his innovative signature sound, Rich resides in an ambitious indie-rock meets alternative limelight that will instantly leave you wanting more. Returning with his latest release, “High School Can’t Last Forever,” the rocking new single merges the sounds of Buddy Holly and Green Day to explore the notion of what really constitutes youth and innocence.

I can vividly remember when I was a small boy and my dad used to pull out his guitar to sing songs at Christmas and other family functions. I always thought it was coolest thing and used to sit next to him strumming along on my little toy guitar. I also remember sitting silently next to him while he played records and wrote down the lyrics and figured out all the chords for various songs. I was fascinated by the process. So, it was wanting to be cool, like my dad, that first got me interested in music. Later, I was hooked for life, when at 14, I wrote my first song. I absolutely love music, but I love songwriting just that much more.

What’s the writing process?
What come first lyrics or music?

These questions are so interrelated that I decided to answer them together. I have to admit, I love these questions!

I have two songwriting processes actually. The first is what I like to call the “wow, I can’t believe that just happened” process. That is where my single “Summer Looks So Good On You” (released July 2021) came from. It is when everything seems to align, for whatever reason, and a song comes out of me fast, quick, and easy. I love it when this happens, but unfortunately it only accounts for maybe 20% of my song catalogue.

The other 80% of my songs come from the second process, which is the “hard work” process. This process is comprised of approximately 10% inspiration and 90% hard work, which consists of a lot of trial and error and experimentation. I’ll start with a melody, guitar riff, or guitar chord combination and work it through many different iterations to find the best combination. If I can’t find something that “sticks” in my head, I will leave what I am working on for another day. As a result, I have had some ideas kicking around for years before they actually become full songs, which is what happened with my latest single, “High School Can’t Last Forever” (released September 2021). That song had been percolating within for 25 before I finally sat down and completed it.

I’d like to rephrase this question. “What has been the most impactful gig you’ve ever played and why? Years ago, my band, Half-Hour Late, and I used to play charity gigs every Christmas. We’d play rock Christmas songs at fundraisers and in hospitals, etc. One regular yearly gig was at a children’s hospital in Vancouver for severely disabled kids. These were kids that had a little motor function that spent pretty much all of their time in a motorized wheelchair. Every year, we set ourselves up in the corner of their activity room and the nurses and hospital staff would wheel all the kids in once we were ready. There were usually anywhere from 10-15 kids attending each year.

One particular year there was one kid who had a nurse who sat next to him through our whole performance. It was pretty obvious that this little guy needed 24/7 care and that his motor functions were almost nil. I really wasn’t sure if the poor guy could move independently at all. At one point, we were about 4 songs into our set, and I looked up to see the little guy’s finger very lightly tapping to the beat of our music. The nurse with him soon noticed as well, and we in the band could see how excited this made her. Without trying to draw too much attention to the little guy, she signalled as best as she could to the other hospital staff what was going on. Soon, the staff caught on to what was happening and you could literally feel the excitement and joy in the room.

That gig was years ago, but it is still fresh in my mind as one of the proudest moments I have ever had with my music. It just goes to show how powerful music is!

The last track I played on Spotify was the song “I’m Torn Down” by the blues guitarist Freddie King! I believe he recorded the track in the early 60’s. He is an amazing guitar player and one worth checking out if you have never heard him before. This one particular song really cracks me up because it is so “blues”!! Here is a line from the song that really gets me: “I went to the river, to jump in, but my baby showed up and said, ‘I will tell you when.’” This guy is so down in the dumps and controlled by his lady that he can’t even off himself without her permission. Now if that isn’t the blues, I don’t know what is!

A couple of things come to mind right away. I have been playing hockey since I was about 6 years old, so I have a real passion for the game. I am not sure if I can call it “talent” though, so I will just leave it at passion! I also am into fitness and run almost every single day. But the one biggest talent I believe I have outside of music is actually closely related to the songwriting aspect of music. I enjoy writing and have written a fiction novel, which can be found on Amazon. The title of the novel is, “18.” I am currently working, very slowly mind you, on a second novel I have tentatively titled, “A Secret in the Family.”

I have been given so many great pieces of advice by so many people over the years, for which I am very thankful, but one sticks out quite predominantly. I had a mentor, early on in my career, that really encouraged me to record myself a lot and listen with an open and honest ear. At first, I really didn’t know what he meant. It wasn’t until a few years later that I started to really get it. He was telling me to be honest with myself and to embrace the things that don’t sound great. By doing this, it allowed me to really work at improving my songwriting, guitar playing, singing, and producing.

I am beyond excited with what lays ahead for me for the rest of the year and well into 2022. Back in January of 2021, I released my first non-Christmas single, “I’m So Tired.” Since then, I have been releasing new singles approximately every 8-10 weeks. I have since followed that song up with three more singles, the most recent, “High School Can’t Last Forever,” was released in early September. My next single will be released in mid November and a full album will be following in early 2022. My reasoning behind this release schedule is that I feel a steady stream of singles will allow me to build up my name and a buzz around me before I actually release my first non-Christmas album. It is all about trying to constantly keep my name at the forefront with new material.

Oh yes, and I mustn’t forget that I will be promoting my 2020 Christmas album, ‘Santa’s Rockin’ Band’ again this year. I am a huge Christmas fan and am so happy to say that I have a rock Christmas album that I can promote every holiday season!

Talk us through the new track / video
My latest song/video, ‘High School Can’t Last Forever’ has been percolating within me for many years. I first started humming the chorus to myself when I used to walk from the Burnaby Mountain park parking lot to nearby Simon Fraser University where I was attending classes (I wasn’t able to get a parking pass that semester… hmm…. or maybe I was just being cheap? … can’t quite remember! LOL!). That simple tune, which later became the chorus for the song, has stuck with me for more than 25 years, but it wasn’t until this last February that I finally made it into a complete song. But it makes sense. On one hand, I conceived the song as a simple and innocent-sounding three-chord rocker, but on another level, I completed it using the institution and concept we call ‘high school’ as a foundational metaphor for how we perceive innocence and dreams. 25 years ago I didn’t have the proper perspective to inject this concept into a basic three-minute rocker. In the end, I am very proud of this song as it combines two very different times in my life into one cohesive underlying challenge for all of us to consider–how do we each define innocence?