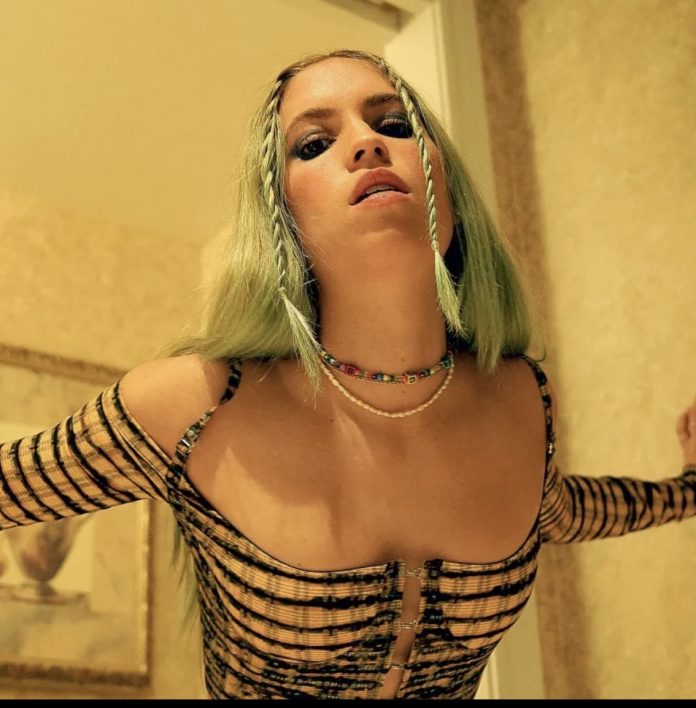 Claudia Bouvette unveils the single ‘Solo Night’ on the brink of releasing her album ‘The Paradise Club’.

This new single follows the release of her other empowering tracks unveiled previously: the bubbly BBZ, the tender ballad Miss Blumenfeld (Claudia’s first song in French), the emancipating earworm Douchebag, and G-GIRL, an addictive song reminiscent of the early 2000s.

I’ve always been an artistic child; when I was only a couple of years old, I spent my whole time singing and dancing. My dad was passionate about music and was the one who introduced me to it. He made me listen to a bunch of different styles and groups at a young age, so I think that my wanting to make music has always been there because it is one of my oldest memories and dreams.

It’s almost the same process every time; I always start by finding the chords I want to work with, and then I pursue to build the musical universe of the song on Logik. After a couple of hours/days of work (depending on the moment’s inspiration), when I have a demo that I like, I will play with some vocal melodies, and I always start with noises and onomatopes at the beginning, never with complete words! It may sound weird at first, but I find this is the only way I can really feel the song with my instinct, and there is a magical thing that happens every time I do it. Some very lovely lyrics and words that fit perfectly with the song always come out of this exercise.

I don’t know if it’s the same energy; I feel like it’s a totally different energy for me! Whenever I’m in the studio, I am way calmer than on stage because I need to focus and let my mind open to create new stuff that I love. On stage, it’s way more explosive, there is adrenaline, and it’s the result of all the hard work I’ve put in the studio! Of course, it is scarier because you’re live in front of hundreds of people, but I feel like I’m still very comfortable when I’m on stage because it’s my material that I’ve been working on for months and that I’ve been practising again & again. At the studio, it is different because it’s always an unknown territory; will it be an excellent creative day ? Will I find new and unheard sounds today? I feel like both energies are so unique, and they are what makes me find balance in this music world. I am a little bit of both: explosive and limitless on stage and creative and full of introspections in the studio.

That’s a good and a hard one for me! I think it’s a question where there could be a lot of answers… but for now, I would say that the music industry has changed in a lot of ways in the past 10-20 years, and sometimes I feel that we kind of lost this connection we had before with our favourite artists. I like to listen to music the traditional way: the whole album, from the first to the last song, is in order. I believe this way; I can really connect and understand an artist’s universe. Now, whenever you listen to music, it will probably be out of a playlist on a streaming service, and even if I love these platforms because they make it so easy to listen to your favourite artists, I feel like it’s something that I miss. I like to think that I really connect to that artist because I connect to the universe they created for them and their listeners.

If you could collaborate with any band/person / producer, who would it be?

Of course, I always have the same answer: my ultimate dream would be to collab with the group Bon Iver and the lead singer Justin Vernon. That is my forever favourite band. However, I recently discovered the new Rosalia Album, which is so f-ing good! I feel like it is so refreshing to use reggaeton in this new way, and you can feel that there has been profound artistic and sound research behind this album.

When I was 14 years old, someone told me that I could have a pure talent, it could be easy and natural to sing and perform for me, but if I didn’t put in the work to achieve what I wanted to do, it wouldn’t work for me. This person told me that putting in the hard work to achieve my goals would make all the difference between me and other talented singers who also wish to become known for their art. That made a difference for me because I remember when I was younger, I didn’t understand how important it was to work my ass off since it was pretty natural for me to sing and go on stage. This advice has stuck with me up to now, and I do believe with no hesitation that it did great things for me throughout my journey as an artist.

Talk us through the new track/video

I’m going to talk about Solo Night! The latest single that went out before the launch of my first album, The Paradise Club.

It’s a song I wrote after a date with a guy who kept bragging about his money and his job and other stuff that did not resonate with me. It’s that type of night where you have to go through it, but you just wish it would end faster! The good side of this bad date: my latest single Solo Night, came out of it! For this song, I wanted to have a funky and fun sound because I felt like the central theme of my album was around heartbreaks, and I wanted this one to be different. I liked the contrast of having a piece of very fun music to this last focus track that happened to come out just before summer as well.

For the video clip, I wanted to picture the Solo Night: it’s me by myself doing my thing, not needing anyone else than myself to have a good time. Throughout the whole video, you see no one else but me in a hotel room, doing my thing, eating chips, doing my nails, riding my car out of town, etc. For me, it’s all about being comfortable being alone and not needing anyone. I think the clip suits the song, and I am proud of it.

Where can we find out more? (also, flog us some merch. We love tees…..)

I have a miniseries that we are developing throughout the whole summer that is available for free on my Instagram! The first episode is already out and shares the creative process behind the scenes of my first album launch. In episode 001, you can see exclusive footage of me with my team, in the studios, talking with my producer, my managers, my best friends, etc.! It is a way for me to invite you guys to my creative journey with limitless access. Episode number 2 is on the way and will share all the details, highs and lows before my very first live performance of The Paradise Club Show in a sold-out venue in Montreal! There are even amazing shots of the actual live performance that I cannot wait for all of you guys to see.

Also, since my first album, The Paradise Club, launched just a few days ago, the following months will undoubtedly be about sharing the good news and performing it as much as possible. I have many music festivals coming up this summer in Quebec, and I could not be more enthusiastic about them, even more since they have been cancelled for the last two years in a row! You can get my vinyl or CD (and other merch) on my website (www.claudiabouvette.com) if you are a traditional listener like me!

Finally, of course, there is always new music upcoming in the next few months. I’ll keep you guys informed on my social medias!