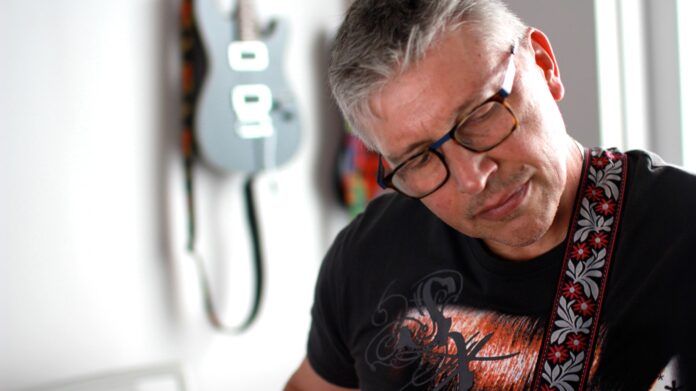 Born and raised in Australia, Collo’s musical journey started when he was given an acoustic guitar as a Christmas present when he was 8 years old. He was trained in classical guitar but spent most of his time playing contemporary music of the day. Major early influences included AC/DC, Led Zeppelin, Pink Floyd and David Bowie. As the 70’s moved into the 80’s he was listening to many of the great Australian bands of the day such as The Angels, Australian Crawl, Cold Chisel, The Sunnyboys INXS and the Divinyls; whilst testing his family’s patience with long and loud repeat plays of everything by Iron Maiden, Bon Jovi and Dire Straits. Back with new single ‘Eye Of The Storm’, Collo’s new single developed quickly.

My mum’s family were very musical and we had a piano at home that I loved to play from a
young age – never had any lessons but just loved trying out stuff on it. I got given an acoustic guitar when I was eight and learned for about 4 years and really got into music and playing regularly from there. Along the way I learned the recorder and trombone at school, but after doing a lot of songwriting in the 80’s I remained an avid listener and concert/pub gig goer but didn’t really do anything myself until about 3 years ago when I decided to get into things seriously.

Normally the music comes first – I always find it a lot easier for some reason. The lyrics are more challenging for me, but personally I think because of this I find it more rewarding when I nail it. I am sitting on 10 pieces of full written and mixed pieces of music waiting to come up with lyric ideas!!!

Riding in Style by Thundermother

The style of Eye of The Storm is a little different to most of the music I write. It is closer to
pop/rock than my normal alt rock/indie rock flavor. This was really driven by the vocalist I have featured on the track – London (aka London Lawhon). She is a former American Idol finalist and when I heard her demos on Fiverr I really wanted to work with her. I thought I needed to tweak my usual style to both bring out her vocal strengths and also have a style of song that would appeal to her. I am so happy with the result – her vocal work was amazing and she did the leads, harmonies and add libs.

I really enjoyed putting the music together initially and wanted to try and push the production values, which I feel I achieved. The lyrics came a couple of months later with the “Eye Of The Storm” words running through my head when I woke up one morning and managed to nail the rest of the lyrics in a couple of sessions over 2 days. Personally I think they are also some of my favourite lyrics and really tell a nice story about the protagonist being caught in a problematic relationship and not being sure how it will turn out for her but ultimately deciding to take control of the situation herself.