Don’t Call Me Ishmael are a band from Staffordshire who have morphed, over the course of three albums, into purveyors of rambunctious pop and heart-on-the sleeve romanticism.

A five-piece outfit containing siblings and lifelong friends, Don’t Call Me Ishmael have an intuitive feel that such close ties bring. With razor-sharp harmonies, a fine ear for melody and truth-soaked lyrics, they tread the line between Frank Turner’s hard hitting agit-pop and The Decemberists’ storytelling folk sensibilities.

New EP Summer is the first a series of four EPs being released with each season, finishing in Spring 2021. Twenty-four new songs will be released in batches of six, with the tone of each EP reflecting the time of year.

The Summer EP leaps from afro-beat pop stomper ‘Prague by Night’, to the reflective and psychedelic tinged ‘Wolves Beware!’, taking in beats of motown (‘Letters’) and garage-rock (‘Vegan Love Song’) along the way. Tight harmonies from the band’s four singers create a warm sound to complement the song’s intricate arrangements and fast-paced guitar playing.

Northern Revive: Please introduce introduce yourself in less than 10 words…..

DCMI: I’m usually not massively comfortable whilst recording, I get too caught up thinking about the fact that if I make a mistake, I’ll have to start all over again. However, on stage I’ll be feeling more pumped up and just enjoying myself. There’s usually been a cider or two involved beforehand as well. Still trying to figure out how to transfer that energy from the stage to the studio. James Prescott Joule was trying to help me with this issue at the time of his death.

DCMI: I don’t have Spotify (I do have Apple Music), but I did listen to The White Stripes – White Blood Cells on my CD player last night so that’s the last thing I listened to.

DCMI: If I was going solo; Whiskey and Lemonade with lots of ice. A bowl of cereal (one third Frosties, one third Special K with berries, one third Curiously Cinnamon with half coconut milk, half semi-skimmed milk) and probably some mash potato and gravy for when I come off stage as I’m always peckish. As for the rest of the band I’m not entirely sure… drugs? 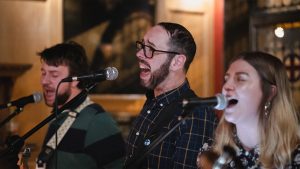 DCMI: I wanna do a song with Orville Peck because he’s super cool.

DCMI: It’s no good just moisturizing your face every day, you’ve got to remember to moisturize your neck as well. And to always tell the truth.

DCMI: Is DJ Scooter still making music? Joking. I think we’d go down well before someone like The Shins.

DCMI: I’m doing okay thanks, how are you? I’ve had a lot of time to read and hang out in the garden which has been fun, but I miss my grandad / brother / friends / local.

DCMI: It’s been great seeing people get creative with Instagram livestreams, virtual Zoom gigs and the like. Shame that everyone’s got sh*t WiFi though.

NR: Talk us through the new EP Summer?

DCMI: Okay so we’re releasing our new 6 track E.P ‘SUMMER’ at the end of May 2020. Our aim was to give this E.P all kinds of flavours, opening with some bright and bouncy summer vibes, passing through some more psychedelic moments and we played around with a Motown inspired track, too. Of course, we also wanted to give you a garage rock / pop anthem, so we did, and it’s about being Vegan and falling in love. We really hope you listen to it and enjoy it. And if someone could get back to me on my DJ Scooter question that would be great, thanks.