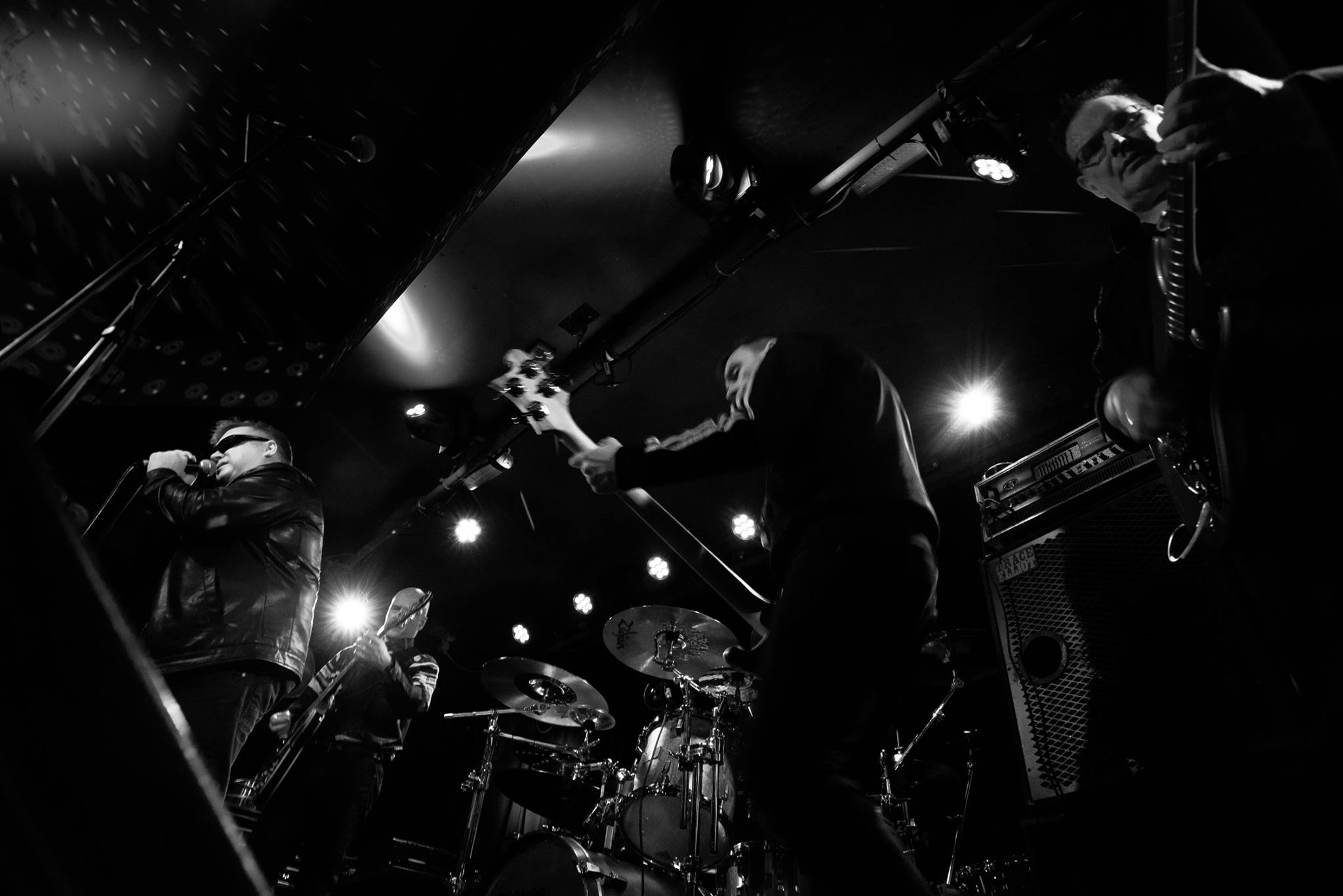 FOLK DEVILS are about to unleash their first new music in over three decades with the ‘Forever’ EP, featuring two new songs “Forever” and “My Slum Soul” and an adrenalized new version of an old live favorite “Ink Runs Dry”.

Hailing from the Ladbroke Grove scene that spawned Killing Joke and other malcontents, the group took their name from sociologist Stanley Cohen’s book on youth subculture Folk Devils and Moral Panics, and have returned with their first new music since 1987’s “The Best Protection” EP (Beggar’s Banquet). The band blazed a trail across the UK’s independent music scene of the mid-80s with their unique brand of post-punk energy. Initially managed and mentored by Ray Gange (The Clash, Rudeboy), they made their mark with their acclaimed indie-chart singles “Hank Turns Blue”, “Beautiful Monster”, three John Peel sessions, plus live dates opening for Nick Cave & The Bad Seeds, The Fall, The Gun Club, Screaming Blue Messiahs, Spacemen 3 and others. They were originally fronted by the highly underrated and now sadly-departed singer/songwriter Ian Lowery, who passed away in 2001.

KJ: Music was as fundamental to our development as people as food, drink and parenting.   Good or bad, it’s hard to imagine life without it, whether we’re talking physically, emotionally, intellectually, or socially.  Although we were never really a punk band the Folk Devils were inspired by the creative possibilities opened up during the punk explosion.  The quest was the thing. Perhaps we harboured some idea that our brand of noise might bring some more tangible rewards than ‘cult status’ but that’s not why we continue to do what we do.  It’s a need.

KJ: It continues to develop.  In the very early days, Ian (Lowery, co-founder) would often present a more-or-less complete song in rehearsal and we’d apply our various sensibilities to turn it into a Folk Devils song.  Later the process became much more collaborative; a rhythm or a riff might spark an idea in someone else and a song would eventually emerge.  Essentially, it’s survival of the fittest.  To survive everyone’s filters and ideas will evolve into something that satisfies all of us; quite a trick given the wide range of tastes at work in the band.  And once we’d reformed, we realized pretty quickly that we needed new material if we wanted to the band to have any sort of a future. 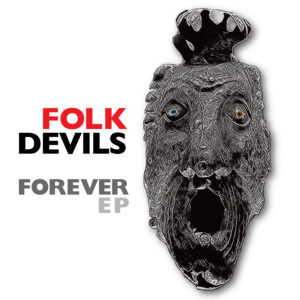 KJ: When we started recording back in the 80s it was to tape and we had to work fast and stick to a tight budget, so rather than seeking perfection, capturing a performance was the most important thing; bass, drums and a guitar track were usually captured together, before taking a bit more care over the vocals and any other embellishments.  Our new EP might have utilised modern digital technologies, but the method was essentially the same: get a whole band performance and add a few extras.

KJ: It’s a long story. All four members of the first line-up already knew each other from kicking around the squats of Ladbroke Grove in the early 80s.  Ian already played with Al Cole (the original drummer) in Ski Patrol, and when that folded, he took a shine to a demo of a recording that Mark Whiteley (bass) and I played on – basically a Stooges rip off – and pitched his idea of ‘a cross between Country Blues and German metal-bashing’ to me, along with the ’Folk Devils’ moniker, and it was clear from the first rehearsal that it would work, musically at least.  Personality-wise it was a bit more volatile, though.  Some of our lifestyle choices were unwise and we broke up three years later.  However, Ian put together another short -lived line-up using the name which included Nick Clift on guitar, with whom had worked in Ski Patrol, and John Hamilton on drums.  Some considerable time later, Mark, John, Nick and myself reconnected as on a personal level thanks to the advent of social media, and there was an occasional half-hearted suggestion of doing a gig.  But sadly, Ian’s untimely death in 2001 and the physical distances between us, playing together looked both impossible and kind of pointless.  What prompted the band to reform was the reissue of our remastered back catalogue on the ‘Beautiful Monsters’ compilation in 2016, following on from ‘The Best Protection & Peel Sessions’ in 2015.  Because we were probably at our fiery best playing live, I suggested a one-off show to celebrate the release of the album, and although we didn’t have a clue how we were going to fill the Lowery-shaped frontman gap in our line-up we committed to doing it, rehearsing properly (so it wasn’t an embarrassment to our legacy such as it was) and, as if sent by the dark lord himself, Dave Hodgson appeared.  He was from the North-East, knew Ian, who we were, and had fronted ‘Parting Shots’ back in the day.  His face fitted. And as soon as that first reunion show was announced we were offered another.  So here we are, four years later with new material.

KJ: Dunno if it was the best show musically, but that first reunion show in 2016 in London was pretty special for me.  If that had been a disaster, that would have been the end of the story, but lots of old faces turned up and we did ok, I think.  My wife and eldest son Michael travelled down from our home in Scotland for the gig.  After we’d played Michael told me it was ‘the coolest fucking thing [I’d] ever done’.  My wife, however, was of the view that the crowd was a little quiet initially because ‘they couldn’t believe [we] weren’t shit’.  Anyhow, we were up and running again after that.

NR: What other talents do you have? (kazoo playing, champion toast burner…._)

KJ: I completed a doctorate on Religion and Film in American Culture’.  Does that count?

KJ: I’d like to see people challenge the inherent ageism of the business; the assumption that, unless you have a pre-Spotify licence to print money (cf the Stones, the Who etc) playing in bands is something for young people, especially so, if you’re looking for something interesting and creative at a more rootsy level.  There’s a lot of great new music being made by our contemporaries like, for example, the Membranes, the Wolfhounds, the Cravats, Harry Stafford (Inca Babies) to name but a few, but getting the airplay that might extend our audiences beyond the long-standing die-hards is difficult.  Yet I’d argue that some of us are as good if not better than we ever were.

KJ: Don’t give advice unless someone asks for it.

KJ: From a personal perspective, as well as a band one, the cessation of live music, especially small, sweaty club gigs that leave everyone drenched in sweat with their ears ringing is profoundly sad.  A good live show is still my favourite form of entertainment.  And for a band like ourselves, the indefinite postponement or cancellation of any opportunities to perform calls our very existence into question.  I guess releasing new music is some sort of alternative affirmation for us, and there are many talented musicians who will find new ways to do their thing as this thing continues.  But I don’t suppose I’ll ever crave watching a singer-songwriter with an acoustic guitar on a computer or smartphone screen, especially if I compare that experience to witnessing the strut and swagger of Iggy Pop with a kick-ass band live on stage.

NR: Talk us through the new EP

KJ: I’m not a great fan of describing music but our new EP offers an updated, richer version of the Folk Devils’ psych-blues swamp sound supercharged with a twin guitar attack.  The louder you play it, the more you’ll hear in it! 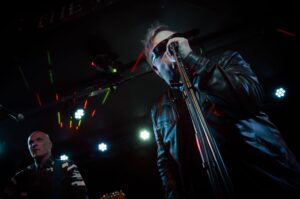 KJ: Our Bandcamp page folkdevils.bandcamp.com is a one-stop shop for all our wares, and liking our Facebook page will keep you informed of what’s going on.