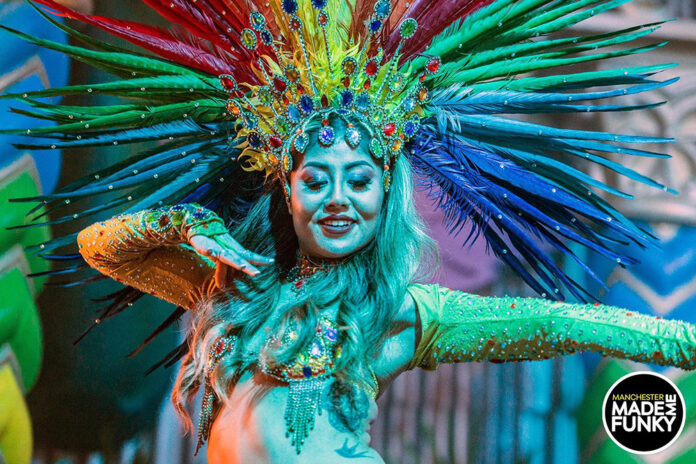 Manchester Made Me Funky Rio Carnival

The stage design brings together each element of colour, shape, energy, and spirit into a parade of Rio character. A Backdrop of bright greens, pinks, blues and yellows fuse into a festival display, with shapes inspired by the charisma of the city streets.

Manchester Made Me Funky
1 of 8

Iconic backpiece feathers, vibrant columns, flowers and designs straight from straight from a festival float form a stage complex which is perfect for performers and displays. Stage features are lit up to enhance the design, including the interior of flowers and the backdrop, and LED screen across the DJ booth.

Carnival shapes and installations are suspended from the canopy to complete the fully immersive setting. It will even rain at times with gold confetti!

The Neon Jungle is an experience that combines new elements of shape, lighting and a sense of immersion into a theme that changes from day to night.

This theme fuses new technology with one of the most popular looks; the deep Amazon jungle. With a new trend in motion towards cyber style, we merged the atmosphere of the urban underground with the soul of the jungle, to take attendees to an entirely new experience.

Design which appears as a natural look in the daytime becomes a true urban jungle at night.

Performers bring the show to life with the character of a true Rio festival. Adorned with spectacular feathered backpieces, glamorous costumes, tall headpieces, and untamed energy, they take the stage to the heart of the tropics, with entrances and tables served by meet and greet personas.

Feathered fans and props are used within displays, incorporating LED lights for a bright visual effect.

Fire performers add burst of flame to a performance, from fire fans, staffs and props to fire breathing. Acrobatic and ariel performers perform a variety of stunning acts, as if displayed from a festival float.

Anything is possible with our performers!

Photo opportunities against a deep forest foliage backdrop, or within cascading festival backpiece wings for those perfect instagram moments.

THE HISTORY OF MANCHESTER MADE ME FUNKY

Funky house was an incredible genre of music at a time when clubbers looked for an alternative to rave, hard house and pop. Each generation has its own sound, but I would argue and so would many others, that funky house was by far the friendliest vibe, with the most uplifting tracks. Manchester has always led the way with music from the Hacienda to several iconic underground house venues. It was disco on acid but in a cool way. Funky house was not only about dancing, singing, and hugging lots of strangers that soon became great friends, it became a way of life. Funky house took the rave scene to the next level and into the commercial clubs which allowed many more people to experience house music. You could go to a funky house club alone, not know anybody but by the time the peak time tunes dropped you were surrounded by hundreds of friends. Funky house was good for your mind, body, and soul.

Ten years of total bliss and incredible music which will never be beaten. This event is dedicated to all on the Manchester funky house clubbing scene which emerged in the late 90s and went through to 2010. Sadly those days have passed. Those venues and nights are not around anymore, but the people still are.

Manchester Made Me Funky is doing something remarkable, we are leading the way in a whole new era in Manchester’s music scene which you can be part of. As you all witnessed at the first event on November 20th 2021 with over 2000 attendees, old faces mixed with a whole new audience of younger clubbers that made the perfect blend and are carrying this wonderful scene from here. The next generation can now enjoy this scene as much as we did.

The Manchester made me funky experience will leave you spellbound.

Join us for the journey!