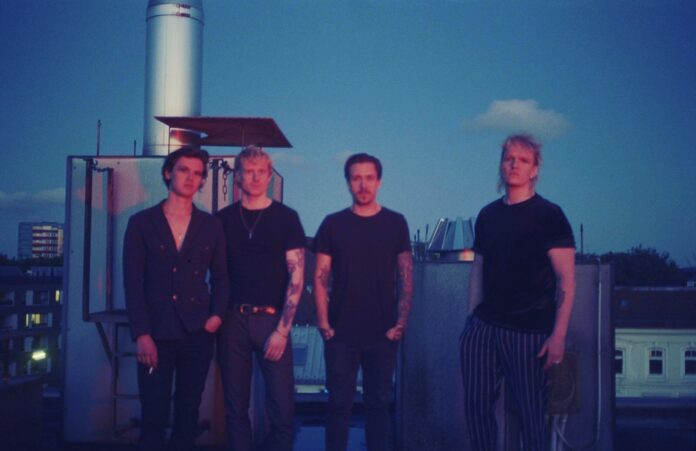 Dubbed “The Strokes Of Hamburg” by Consequence Of Sound, The Kecks emerge from a worldwide lockdown with an infectiously catchy new single, ‘Tonight Might Be Different’.

A swaggering new single that harbours an infectiously catchy dirty disco groove, hinged on the narrative that life is a constant shambles, yet we always live with the hope that tonight might be different.

Following on from the dramatically self-aware heartbreaking ballad ‘All for Me’, The Kecks have returned with a fierce edge, combining an intensely visceral groove alongside their trademark raw and honest lyrics, all built around huge hooks before building towards a crescendo. This song is exactly the kind of danceable self-destructive indie banger that encapsulates the energy and frustration of this seemingly never-ending global nightmare.

The video was cut together by U.S cinematographer and director Andy Ray Lemon – director of the cult underground grunge documentary MondoFuzz. The Kecks have long been fans of his work since first discovering his infamous documentary upon its release. Once Andy heard the song, he immediately set about patching together some old trash VHS footage, adding some psychedelic visual effects and cutting together a short narrative – and this weird and wonderful video was born.

Having already established a firm DIY ethic after releasing three singles and touring both the UK and Europe, The Kecks have teamed up with Blaggers Records for their debut label release, but still cling to their DIY values with a hand painted artwork by frontman Lennart Uschmann.

‘Tonight Might Be Different’ was also the band’s first physical release earlier this summer, with the limited pressing coming on see through vinyl on U.K based Butterfly Effect Records selling out in a matter of days.

With their first post-lockdown show very much on home turf, the cross continental rockers return to their roots at a sold out Molotow in Hamburg. This marks a new dawn for the band having spent the unexpected worldwide hiatus locked away lovingly crafting new songs and sounds.