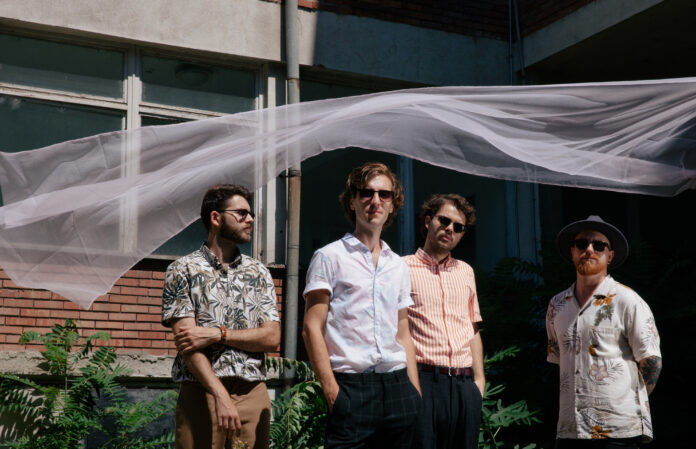 Like all bands, Hayes & Y have been hit hard by the pandemic. Rather than dwell on the gigs that could have been however, the band have channelled their creativity into a trio of releases, the first of which ‘The Times’, received support from tastemakers such as KEXP and When the Horn Blows, and it’s follow-up ‘Empty Orchestra’ looks set to do likewise.

“I was [originally] writing ‘Empty Orchestra’ for someone else,” explains frontman Blagoslav Anastasov “but the guys loved it so much that we decided to keep it for the band. It’s a more mellow and melodic side of the band, but we still tried to preserve some of that indie disco vibe that we like so much. The lyrics are about trying to get back to a moment of joy and making it last longer.”

Showcasing Hayes & Y’s own brand of dystopian disco perfectly, while offering up a smoother, poppier sound to its predecessor, ‘Empty Orchestra’ is three and a half minutes of steadily mounting pop perfection. And though it’s subject matter might be seeking to recapture those ephemeral moments of joy, ‘Empty Orchestra’ itself is far from fleeting, sure to stick in your head from the instant its closing notes ring out.

Hey guys, thanks for taking the time to answer our questions again. What have you been up to since we last caught up?

Our pleasure! We’ve been using the latest lockdown to work on new material. Very excited about it!

You’ve just released your new single Empty Orchestra. Can you tell us a bit more about that?

‘Empty Orchestra’ is a track that’s more melodic and vocal-driven than ‘The Times’, it was one of those that are written on the piano and the groove comes later. It took a long time to come together and the last part had about 20 different versions before it finally clicked.

It’s part of a trilogy of releases, the first being previous single The Times. Is there a theme between these releases?

Lockdown is definitely ingrained in those tracks, but in a different way. ‘The Times’ was more paranoid and this one is more nostalgic.

Are there any plans for an album in the pipeline?

We hope so! We plan to release at least 3 more singles until the end of 2021 and then we’ll see.

The four of you are based in Manchester but come from Bulgaria and Finland. What are the benefits you’ve found from relocating?

The music scene in Manchester is vastly better than the one in our home towns, there’s really no comparison. Also, if we’re comparing with Bulgaria, there are a lot more opportunities in personal development. It’s a brilliant town if you’re an artist.

Similarly, how do the scenes between mainland Europe and the UK differ?

UK is much more band-driven. Rock music can be found in every tiny part of society.

With you guys having such ties to Europe, how has Brexit affected you, or how will it affect you?

So far it really hasn’t, but it’s probably too early to tell. Let’s hope it doesn’t!

Lockdown is now hopefully behind us. What methods did you use for getting through the last 12 months?

We’ve tried to change it up as much as we can, because, as we all know, it really can get you down. Music has helped, but so has stepping away from it at times. You have to give yourself space.

Did it affect your creativity at all? Did you find it stifled or were you able to use it to your advantage?

It comes and it goes. We’ve written quite a lot of songs, so in the long run we’ll probably look on it as a very productive period.

With the country seemingly on its way back to normal. What’s in the pipeline for Hayes & Y when normal service resumes?

We’d love to gig as soon as possible. In the meantime we’ll be releasing a lot of new music.

Finally, any partying words of wisdom you’d like to leave our readers with?

We hope everyone stays safe, we’re not quite out of the woods yet, but it’s looking better. Can’t wait to see you all in the pubs and venues again!