HEAVY SALAD let it all out on ‘It’s OK To Bleed’, the latest single and closing track of their upcoming debut album: ‘Cult Casual’ (out 25 September, Via Dipped in Gold Recordings).

Recalling the woozy lullabies of Spiritualized or Mercury Rev, ‘It’s OK To Bleed’ is an emotional, gospel-tinged folk rock song that seeks to inspire individuality, compassion and living in the moment. Featuring Heavy Salad’s faithful backing singers: ‘The Priestesses’; the full flow of their transcendent gospel vocals provide an evocative and cosmic new dimension to the band’s soft psychedelic hum.
Set for release on 25th September through Dipped In Gold Recordings, Cult Casual is their stimulating debut release. Written at their base in East Manchester, it’s a loose concept-album-of-sorts that explores the idea of finding your own reality in the modern world. Beginning with ‘Death’, the album takes the listener backwards through the very experiences of existence. From the after-life to apocalyptic visions of the future, via hallucinogenic nights plagued with polar bears and conversations with the AI in your phone, it’s quite literally the journey of a lifetime…
In keeping with the rest of upcoming debut album Cult Casual new track, ‘It’s OK To Bleed’ was produced by Ross Orton (Arctic Monkeys / Working Men’s Club). As the final track of the album, the song was also the very last to be recorded for it – on the day before the world came to a total pause…
Northern Revive introduces Heavy Salad
Northern Revive: Please introduce yourself in less than 10 words…..
Heavy Salad: Seven divided by three Super Freaks three Priestesses one boy-wonder.
NR: How do you transfer that onstage energy to the studio?
HS: The 2 super producers we’ve been lucky enough to work with on this record in Christoph Bride (ACR) and Ross Orton (Arctic Monkeys, WMC) have a way of drawing magic and energy from us but also just being around each other the 7 of us kind of always end up creating a giddy energy in a room together whatever we are doing.

NR: What has been the best gig you’ve ever played and why?
HS: Wow gigs seem like a past life at the moment!.
Our Christmas party show at The Eagle Inn (Salford) last year was the most fun, we were celebrating the end of our first year as a band at an amazing venue which is like home (Esther in the band is the landlady) at a sold out show with our good friends The Maitlands, Gold Top Baby (Dorian) and Weekes of Sandwich sharing the bill.  Just a night packed with close friends at an amazing venue with all the bands pulling out a rad performance and a great sound guy, that night was the opposite of Covid… just packed together closely with a bunch of people you love. The Dublin Castle in London was also special as its legendary and we had a super HEAVY night afterwards.
NR: What would be on your rider?
HS: Mezcal and a whole bunch of stuff Josh Homme sings about. Though we’ve usually just been given Fosters up to now.
NR: What other talents do you have? (kazoo playing, champion toast burner…._)
HS: We can tell what peoples spirit dogs are, like for example in this band ..Lee (Golden retriever), Allan (New Found-land), Rob (Daschund), Lucy (Afghan Hound), Esther (Springer Spaniel), Ally (Doberman), Oscar (Red Setter) it’s based on 3 criteria…. personality, your Look and Gate.  Obviously we can all talk to the dead and extraterrestrials being a cult.
NR: If you could collaborate with any band / person / producer who would it be?
HS: Super Furry Animals /Stephen Malmus/Stephen Street.
NR: If you could open for any artist who would it be?
HS: Blur or Flaming Lips
NR: What’s your in store for you when all this is over?
HS: We are gonna make 3 records then all go retire to Malibu Beach and Laurel Canyon with a whole bunch of Cats and Dogs.

NR: How have carried on with the creative output in lock down?
HS: It’s actually been insanely fruitful, we were so lucky to have this album(Cult Casual) finished literally a few days before Lockdown began so that was a creative chapter closed.
So we spent the time just writing, recording bits in our little bedroom setups and sending ideas back and forth, we think we may have written the bulk of ideas for the 2nd album during lockdown. We’ve been so used to playing together every-week, writing and recording this album full on, playing shows and enjoying each other’s company musically and socially. We are all close so I think we’d have all gone mad if that had just come to a complete halt. Plus there has never had so much time on our hands to write for like a century!. 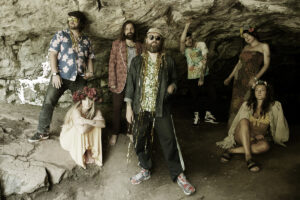 HS: Remains to be seen what will be left when we come out of this and hopefully this crooked excuse for a government will do more to help protect our great venues but before the end of the world the music scene in Manchester was really healthy, really good bands and a good vibe between bands as well, some truly rad venues Eagle Inn, Yes, Deaf institute, Night&Day, Gorilla to name just a few and a lot of people willing to go out and support live music. There is a lot of unsung heroes in the music scene aside from the bands that seem to be really supporting the bands and doing it just for the love of supporting new music. Bloggers, fanzines, local radio, fans that get behind it and spread the word. People like Stuart who has a show called Golden Believers on Fab Radio is an example they seem to be really tying a sense of unity to it all, same with Steve Kelly and Paul Holmes on Indie Rocks, Ivan Thunders who puts on amazing events and promoters like Dave Beech at SOTN to name a few. We feel so lucky that national radio have been spinning our latest singles from this album but these people locally are vital and help tie it altogether.

NR: Where can we find out more? (also flog us some merch we love tees…..)
HS: Hit up our insta, FB Twitter pages.
We’ve got Tees and Stickers coming in the next few days but you should defo buy our new album Cult Casual on beautiful transparent Orange vinyl! Out this Friday 25.09…..you can pre-order from
https://www.dippedingoldrecordings.com/shop/heavy-salad-cult-casual-lp?fbclid=IwAR3sJvoRuehHsqZwR4R9Fi_gCDdZnqXweckg1N3HB5CJB5IlpVdC0BKCapM or from your favourite record store.
LISTEN ON: SOUNDCLOUD || BANDCAMP || SPOTIFY