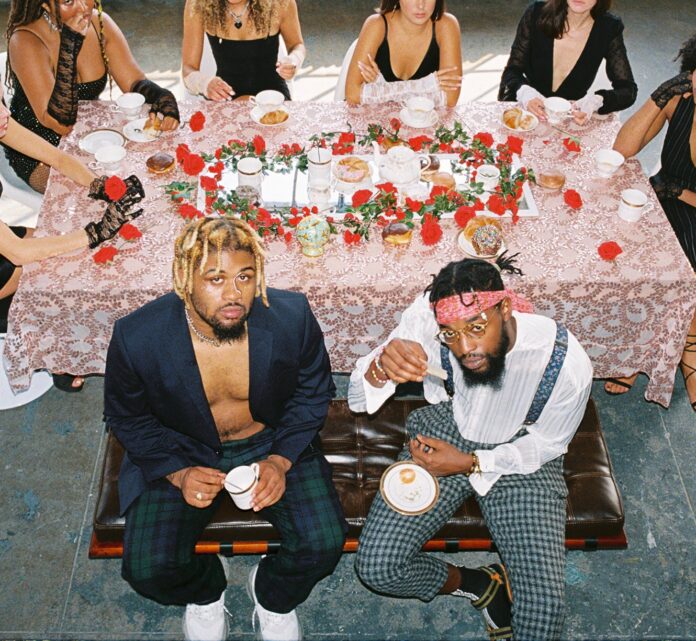 In life, sure things don’t come around too often. Luckily for us, we’re able to break the news that it will undoubtedly be a “Tribe Summer”. Alternative hip-hop two-piece, Hippie Tribe, is the gravity-defying duo you need in your life. Consisting of blond.bomber (the classically trained pianist who taught himself Bach at age 8!) and dp.thuHippie (who aspires to write, direct and score his own movies), the combo have been turning heads with their addictive, signature sonics. They create a sound all their own as they seamlessly flow through and blend the highest peaks of various genres like Hip-Hop, Pop, R&B and Alt Rock. A sound so undeniable, the multi-instrumentalist tandem know their breakout is right around the corner.

– What made you want to get into music?

– “we both grew up playing instruments in our respective churches. I’ve been sitting
behind a snare since I can remember. My folks gifted my older brother’s a drumset for
Christmas when he was 4 – they say he played it for about a few days and once he
put the sticks down, I picked ‘em up for good.” – dp.thuH

– “All of my family members are musicians so I was born into music too…..I mean, We
literally sing in harmony at all child births. I would say I wanted to get into becoming
an artist because 1. I love music 2. I don’t believe in working 9-5 [for “the man”] 3. the
stage / performing is the best drug ever.

– The first exposure, our foundation was heavily swayed by Gospel. Gospel incorporates a lot of different genres and it’s eccentric but it’s still subtle in a lot of ways, still familiar. There’s a lot of dynamics within the compositions – that’s all relevant in our music and productions. We try to keep the instruments minimalistic and shape it around the voice – incorporate those little moments, especially with the vocals, that pop out to the listener.” -blond.bomber

What’s the writing process? What come first lyrics or music?

– “we have a few different methods to making our records but it’s rarely too much
writing forreal . 1 way – I generally have a hook or melody or something that I wake up
with, then I’ll take that idea to the studio and start producing around that. Once i have
at least a shell, I’ll prolly roll one and start freestyling till it feels right. 2nd way – Niko
will start playing keys and we freestyle until we really like something. 3rd way – Niko
will have a beat or short chord progression or a loop and he’ll open up his lil digital
pad and i’ll peep different short stories or poems or something he’s written – we really
might talk about what he was feeling in that moment or what he’s trying to convey – i’ll
formulate a chorus or bridge idea which leads to more and more…i dont know, We
don’t really decide which comes first – we just kinda go. ” dp.thuH

– “Exactly, It varies a lot, inspiration is everywhere – like you could be sitting at the park and words come to you or with your homies or having sex or dreaming. We just let things flow as organically as possible. So sometimes dee will have a beat that inspires me o someone will come in with some bars they came up with on a random whim. We really just let the universe decide “ – blond.bomber

– “I feel like it’s reversed – you transfer all the energy from the studio onto the stage—
The hours writing, practicing, getting it wrong , wanting to quit – all comes out on
stage cuz this is what you do all this work for.” – blond.bomber

– “thats facts – performing is the reward we get for all the other stuff” – dp.thuH

– “in school – we played football at the same university – we were in Fall camp and it
had to be a one of the double practice days. we had hella meetings in between
practices – me and niko both played defense so we on the same scheudle pretty
much. im on my way to our meeting and as im coming up the stairs to the ballroom
where the meeting is, i hear somebody going nooopid on this grand piano. i get
closer…never would i have thought it’d be Niko playing – from there, we were always
chattin about chune, sending each other shit, freestyling at parties. after i graduated,
i was living and working in the city and one day niko pulled up to my crib with a beat
he produced and it was HOT – he said he thought we should start making our own
music together….we’ve been goin since. ” – dp.thuH

– “im a pretty good baker – Lucy Lui can vouch “ – blond.bomber
– its true, he can do shit like souffles, we need to get him on the British Bake off show…
which would be perfect because we both have really good English accents – in my
most humble opinion. So thats 1 for me. And i can whistle like a bird, but never at a
bird, you dig? But I can’t do the loud whistle – so I don’t know if it fully counts. Damn, i
dont know if im talented now” – dp.thuH

– “Beyoncé and frank or Sia – i feel like i could really cook somethin crazyyy for them.
our dream when we first started making music was to be in the background – produce
and write for the top artists in the world. But its kinda like a catch 22 – tryna convince
people that you’re a good writer when you’ve never written for anyone is tough. So
we decided to make Hippie Tribe the portfolio” – blond. bomber

– “Artists I wanna work with – prolly up top is Willow. Yves Tumor and I would go
noopid. I been on this rock / punk kick then this r&amp;b kick, i think me &amp; Brent Faiyaz or Dream would kick somethin super serious. Roddy just because I know he would
wanna jump on our Punk Rap shit and spazz. Solange, woah. Damn, it’s too many. I
think the main producers would be Pharrell, Tyler,….Timbo….i consider Ty$ a
producer so him – oh shit Take a DayTrip! I think our vibes are the most similar – they
use a lot of theory with their chord progressions, they always make really fine
decisions with their instrumentation and placements and the dynamics are always
perfect. Yea when us 4 get in a room, it’ll get scary.” – dp.thuH

– “i think gotten different iterations forever but it kinda all sums up to this – “do the
possible”. niko’s pops told him that a couple of months ago. the impossible is
impossible so why worry about it? do everything you can and let the rest be the rest.
What’s for you is for you. So just do the possible, and let god take care of what can’t
be imagined.” – dp.thuH

– “Maiya Blaney, hella soulful, incredible voice and she can spit. like odee, she be
rappin in French, really dope pen, yea she’s gonna blow up. “ – dp.thuH
–
– “ACE TRE for sure. if we could afford him, we woulda singed him years ago.” –
blond.bomber

– “Thé new track is just pedal to the floor energy. Ace brought me the song in Brooklyn
abd as soon as I heard it I had him beam me up. We listened to a bunch of
unreleased stuff he had that weren’t done but that one had crazy energy in it. we
recorded on sight 15 minutes punching in real freestyle type.” – blond.bomber

– “Nahhh, you really gon’ feel that punch – this shit is on some bust down the door
theme music shit. its straight energy…is that why yall called it Goku? I get it now
[laughs]” – dp.thuH