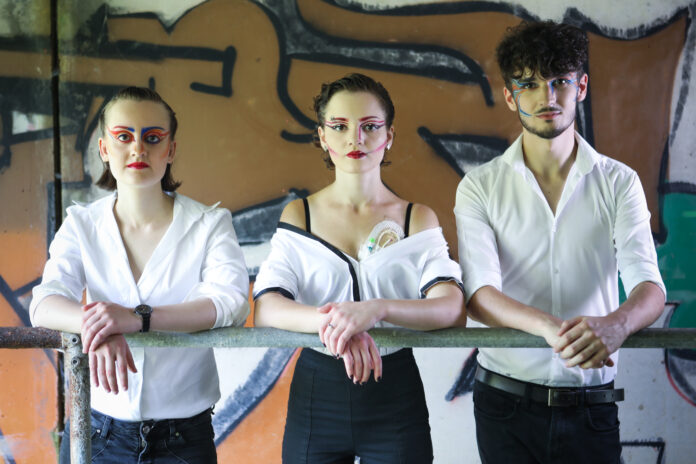 Produced by Gavin Monaghan (Editors, Ocean Colour Scene, Paolo Nutini), the track is a modern take on 70s glam rock combined with the gleaming, melodic guitars of the greatest of the Britpop era.

‘With ‘Memory River’ I was channelling the attitude of ‘stand back, I’m coming through’, in stark contrast to its lyrical predecessor ‘Red Biro’, which was still full of anger and pain. This song is about respecting my old experiences and moving on. It’s like looking an old ghost in the eye. As a band, we wanted to channel that energy lyrically. Moreover, we wanted to channel it through the exciting controlled chaos of tangled lead guitars and a vibrant rhythm section.’

Northern Revive caught up with the to find out how they managed lockdown and their new release. Follow our exclusive interview with Idealistics’ Memory River single release.

George: The process will almost always start with lyrics from Ali. She’ll send them over to me and I’ll come up with a tune usually on an acoustic guitar and record it on my phone – I have thousands of little voice recordings of very early versions of our songs! Dom will then flesh it out with drums and then we’ll put together a demo using audio software.

Ali: Well, Dom and I are sisters, so we didn’t get much of a choice! As for George, he used to upload guitar covers to YouTube and someone shared it to an online group I was part of. Moreover, we started talking over Facebook and got together a few months later. Romantic.

Ali: I’ll never forget when we played one of our local venues in Cambridge and we were covering Magic Dance from Labyrinth. Me and George started doing the beginning dialogue and when people realised what it was, their reactions were priceless!

NR: What other talents do you have? (kazop playing, champion toast burner…._

George: Dom’s a biologist… I don’t know how to do much else from music, however I do enjoy cooking and I’m not too bad at it – I know the seasoning triangle rule.


NR: If you could collaborate with anyone who would it be?

George: I think we’d all really love to work with Ed Buller in the future. He worked on some of our favourite albums by bands like Suede and White Lies. We love the atmosphere he creates.

Ali: We were making plans for a tour around the UK before lockdown so it will be good to get going with that once venues are up and running again. It may be a while yet before the country is at that stage though. We also have a really strong album concept we’re all excited by so we’ve been working on a few demos when we can!

NR: How have you coped with lockdown?

Dom: We’ve been pretty lucky to all be together for lockdown, so we’ve been able to get quite a lot done. We’ve been working on a bunch of demos and doing some live streams over Facebook and Instagram. Fortunately, it has been a really great way to interact with everyone.

Ali: We are most active on Facebook so head over there for all the latest news from us! We also have an Instagram and Twitter. Therefore, if that’s your jam, you can follow us over there just as easily. We don’t have a band tee yet; maybe we should make one.

Dom: I should try to crochet some socks or scarves or something as merch as well, though I don’t know if anyone would wear that!

Ali: There’s a track on our first EP called Red Biro. It was written as a commentary on my experiences through secondary school and Memory River is essentially a follow up to that track in terms of the lyrics. It’s a response to what I went through and how it shaped me!

George: Musically, we we’re trying to achieve the sound and attitude of 70s Bowie and early Suede – we were listening to things like ‘Diamond Dogs’ and the B-side ‘Killing of a Flashboy’ and I think you can hear that coming through. Luckily our producer, Gavin Monaghan, had the same idea as us when he heard the demo. He came up with the idea of having the sliding, tremolo guitar on the intro which he got from Space Oddity. He even threw some cowbell in there!