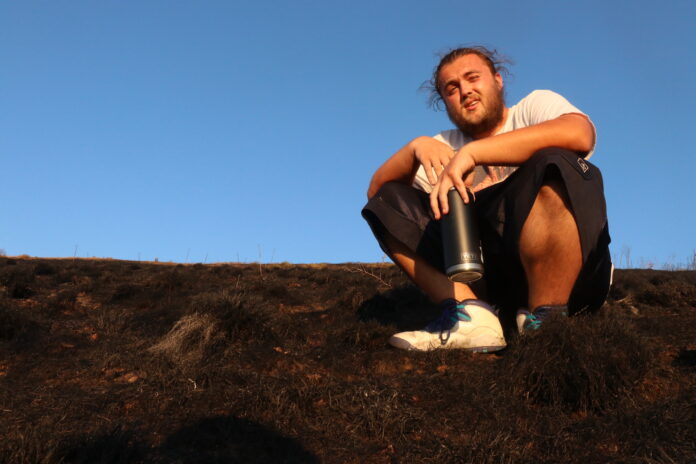 Apex God emerges with hard-hitting bars and a variety of beats in new single ‘Sugar Ray’. Having started rapping in 2017, Apex God dropped freestyles on YouTube, and now has music across all platforms. Taking the town of Missoula by storm, Apex God founded a record label with other local talents. Their record label has amassed over 500,000 streams and embraces an old-school, ugly style of rap that always leaves the listener wanting more.

When I was a kid, my older brother would burn me CD’s. It started out with the usual stuff, I live in an area where it’s mostly Country and Rock, and he’d throw some kids music on there. One day he gave me this CD and it had The Real Slim Shady on it, it felt like it was the first time actually feeling the music, before it just kinda played, and I’d sing along and enjoy it but I never actually listened before being introduced to rap. As I grew older I dove more into the rap genre, always knowing it was for me but back then in a little country town, it feels like an impossibility, How could I be a rapper?

In high school I met two friends, Tommy and Matt, as I hung out with them more sometimes when I came over, a microphone would be out in there room. I asked them about it and they showed me that they were rappers, Just using a scarlett interface and a stage mic, but they were doing it. I never wanted to be the person to come in and just try to take over so I started rapping alone after seeing it wasn’t actually an impossibility. I sat in my kitchen spitting freestyles over youtube beats into my iphone 5. And after a couple months, Tommy and Matt wanted me to rap with them and I haven’t looked back since.


What come first lyrics or music?

It’s gotta be the music, the beat, for me. I have written something and then found a beat it fits well or perfect on, But I prefer molding my lyrics to the music. I like to feel the drums and melody before I write to it, and sometimes when I feel it I’l think ‘ Oh! I have something for this!’ but usually I start by making the beat and then as I’m making the beat I kind of am thinking about the vibe and what exactly I want to write about so when I finish I usually just transfer to the writing and recording of the track. Unless it’s a beat I envision someone else on.

I used to ride the bus with Cisumaka when we were in elementary school. He was a grade ahead of me so he was always telling me stuff to look up on the internet. We went to a YMCA afterschool program together, but by the end of elementary we didn’t hang out much. Fast forward to being a sophomore I was driving around with some non music friends and someone says ‘ Yo that’s Curtis(Cisumaka)’ he was skateboarding, I picked him up and that’s how we became friends again. I met Tommy and Matt through my other friend that same year, and they were already friends with Cisumaka, So when I started making music it all meshed together pretty easily. Ellis D and Slump D099 I met later on but they were the other guys friends and they were passionate about music so it just meshed together really well too. Apex God is just myself as an artist though, All together we make up Stay Ugly.

I listened to a new Mick Jenkins and Wax Tailor joint called No More Magical. Stay Ugly also just dropped a track I made the beat and chorus too, I have a verse at the end too, It’s calle Lurking Larks it’s a banger. It’s a single from our upcoming No L’s project

For music I can play some piano, some guitar, some saxophone, some fingerdrumming, plus my writing and engineering skills. Outside of music, I am a decent basketball player, a decent cook and bartender, I used to do a little Judo and Kickboxing. I enjoy writing things besides music too, like stories and screenplays. I am getting better with photo and video editing, I know a little spanish.

I don’t think about it too much, you have to evolve with the times it’s just part of the game. It’s sad physical music is on it’s way out but it makes sense, plus vinyls are bigger than they’ve ever been. It’d be nice if streaming platforms would pay more per stream. Some are being better that are others need to go up, but I’m also not one of these people that get extremely angry about it. The industry ( All industries for that matter) always has people trying to get ahead, and it always will. The artist has more knowledge and power than ever before. Most people know that a 360 deal is usually not in their best interest. The artist has been able to be more independent than ever before, which is a really amazing thing. It’s possible to have your music next to big artists now without getting your cd placed in a Walmart or big retailer. Lyrical and Underground is coming back in a big way it’s cool to see.


If you could open for any band / act / solo artist who would it be?

Well if it is alive or dead I would pick MF DOOM, rest in peace. . He is my favorite artist and the most inspiring in my eyes. He is a part of the reason my friends and I are branded Ugly, cause to us it’s more about the content, not the appearance. Mick Jenkins, the Dreamville and Top Dawg cats, Knxwledge, Spillage Village, Madlib, Dr. Dre, I’d love to open for and work with these artists, and a lot more. Cordae and Earl Sweatshirt recently dropped projects and they’re both great. I love most styles of rap and I enjoy working with talented people at the end of the day.


What other bands do we need to be checking out right now?

Well the label I founded with artists, Tommy Lennon and Cisumaka, is Verbal Vomit Stay Ugly LLC, We also work with other local artists Slump D099, Mkorn, and Ellis D. We go by Stay Ugly as a group and we all have solo careers as well, I’ve had the pleasure of meeting lots of talented people, so I decided to create a playlist where I would try to highlight talented people that haven’t got their shine. The link is in my Instagram bio, I hope you all check it out because these people really do deserve more ears on them. To throw out a couple names that aren’t Stay Ugly artists, Yung Bobby is a melodic mac miller, jack harlow type rapper( That also is just in his own lane, but if you like Mac and Jack you’ll like him), super funny and genuine dude that deserves more shine, A local cat going by Rustle, also very genuine guy, met him in a restaurant after he overheard I was a rapper, he’s more in a christian lane but he has bars and he talks about real shit, I believe he has a music video coming soon. I could go on all day about great artists but go check out my playlist if you wanna hear more.

Well it’s been a great start to this year, I’ve just been having a blast creating a ton of music, Stay Ugly is on course to drop 3 tapes this year and most of the artists in it are dropping a solo tape, myself included. AGFC is the name of the tape, set to drop March 15th. I think it’s really gonna show my growth as an artist and engineer, Over just a year I’ve come a long way and I’m excited to see where myself and Stay Ugly are at by the end of the year.


Where can we find out more? (also flog us some merch we love tees…..)

Obviously, searching Apex God on any streaming platform should bring you to my page. My instagram and twitter is vvgly_ApexGod. Check my IG bio for helpful links, our label website is verbalvomitstayugly.com where you can find merch and music videos. We got tees and sweatsuits, notebooks, stickers, CD’s, whatever you need.