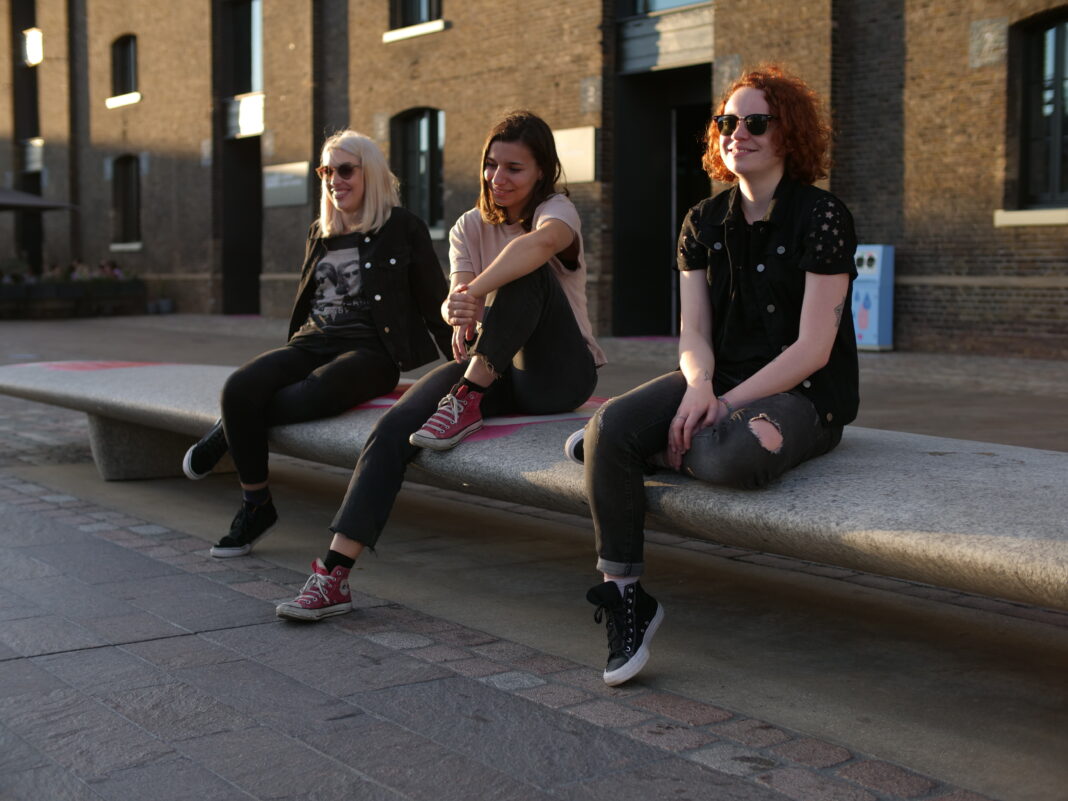 Following the exciting announcement in November that BERRIES have signed to Xtra Mile Recordings, the trio are now gearing up for their first release through the label on Jan 22nd 2021, with their hard hitting single ‘Copy’.

The band describe the single as being “about imitation and how we are programmed by society to try and live up to other people’s expectations of happiness and how unhealthy, self-critical and obsessive this way of existing can be”. Four minutes of snaking guitar licks, frenetic percussion and an ever-present undercurrent of fuzz-heavy melody, it’s quintessential BERRIES, while feeling like the band taking the next confident steps forward in their career.

Hey guys, thanks for taking the time to answer our questions. How’s it going?
We are doing all good thank you!

Can you introduce the band and tell us a bit about yourselves?
Hi everyone, we are Holly, Lucie and Lauren. Lucie is from France and makes up her own English words, she plays drums and loves bike rides on the weekends. Lauren and Holly know each other from Norfolk. Lauren is the bassist and semi-pro Origami maker. Holly is our front woman singer guitarist. She loves true crime documentaries and horror movies…

It’s been a bit of a crazy 12 months. What’s been going on for you guys during that time?
We have been super lucky to get signed by Xtra Mile Recordings so most of our time is spent working on new music and content. The lockdowns are not very exciting but we are grateful for technology, recording software, zoom, (wine), take-aways and Netflix (!)

How have you managed as a band over that time, has it been particularly difficult to write or record?
We took a different approach to it and I think we’re doing ok! Lucie thankfully has an electronic drum kit so she can still practice at home and send us mp3 files. Holly works on lyrics and riffs and sends them to Lauren who has amazing mixing skills and creates demos for us. That being said we can’t wait to play in the same room and feel live vibes again!!

You did manage to support Frank Turner at a socially distanced show in Nottingham. How was that?
It was amazing, Xtra Mile asked Holly if she would be up for doing an acoustic set supporting Frank and obviously she was buzzing. She had about 2 weeks to rearrange the tracks and make them suitable for acoustic guitar. She met Frank, Beans On Toast and The Xtra Mile Team (they are all the nicest people ever!). The crowd was really lovely and it was a brilliant day. Lauren was in the crowd cheering her on while lazy Lucie was on holiday haha.

You recently signed to Xtra Mile Recordings. What’s that been like for you?
It was the highlight of the year (obviously), like a really really amazing gift that cheered us up so much. It is amazing to have a team on board who are supportive and creative. We have always been huge fans of their roster and it was unbelievable to be recognised as part of the family 🙂

With there being so many options available for bands to self-release these days, how important is it for bands of your size to get that extra label support?
There are loads of amazing opportunities to self release these days, so it’s definitely a desirable option for some bands. For us, we are definitely benefiting with having a team to work with, and we do feel we are gaining a lot from being on the label (contacts, advice, opportunities). It’s really great being part of a roster who all support each other and feel really lucky to have an amazing team on the other end of an email or a phone call. But there isn’t really a wrong or right way, it’s totally different for each band and how they want to work.
You’ve just released your new single ‘Copy’. Can you tell us a bit about the track?
There are heavy bits and lighter bits and grungier bits and some wah pedal. We feel we have packed a good amount of variety into 3 minutes 45 seconds. It’s one of our favourites to play live. It’s about the darker side of imitation and obsession, so quite a cheery song. Haha.How has Covid affected the promotion around the track? Have you had to do things differently this time around?
Yes we have! Usually we would support the release of new music by doing shows and getting out there and meeting people. Obviously when that isn’t possible you have to think a bit outside of the box, so we came up with the idea of an online launch and there were lots and lots of ideas thrown around haha! It formed into an online pre-recorded concert with tracks in different settings, live, acoustic, recorded in the same room or at a distance. We learned a lot and on the plus side a lot more people were invited and attended as anybody in the world could join! We had fans from America and France commenting live and the views are growing day after day so it’s nice to be able to share more thanks to a replay.
Finally what can we expect from the band as the year progresses?
I believe this has been mentioned and we’re not spoiling the secret (!) We are working on an album and we have been locking a few gig dates in, ready for when freedom comes back to the world! We can’t wait!!! 🙂 Stay tuned!!
~
https://berriesband.co.uk/
https://www.facebook.com/BerriesBand/
https://www.twitter.com/berriesbanduk
https://www.instagram.com/Berriesband
https://www.YouTube.com/Berriesband