Introducing Bunkerpop and New Single Times Up, Lights Out 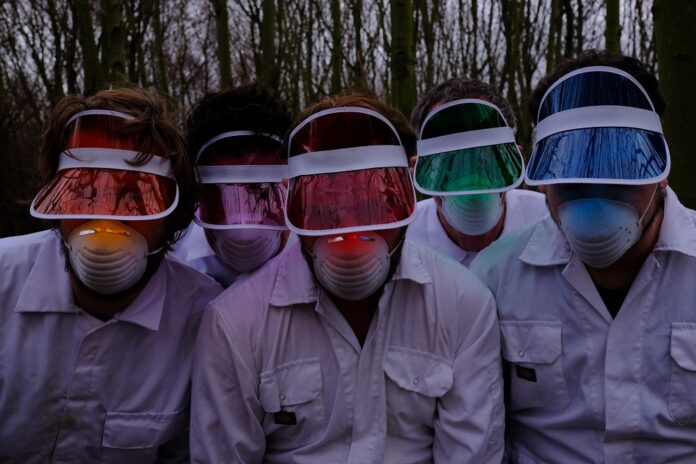 Since forming in 2016, Hull sextet Bunkerpop have been forging a path very much of their own creation. Channelling the likes of New Wave artists such as Talking Heads and Devo through a lens of scrappy guitar pop in the vein of bands like Parquet Courts, the six-piece succeed in bringing the classic kicking and screaming into the contemporary.

Indeed, such is the band’s propensity for doing things their own way, that their 2019 debut album was crowdfunded, self-produced and then released on the band’s own micro-label Fast & Bulbous. An upbeat and often experimental foray into the band’s psyche, the self-titled debut established both Bunkerpop’s ethos and their atypical approach towards their music.

While much of what’s come previously has been largely instrumental, new single ‘Time’s Up, Lights Out’ is the first to feature a vocal in the true sense, and as such has allowed the band to channel their anger and ire in a way unseen on previous release.

“Times Up, Lights Out is our art-pop ode to all things angular and edgy” the band explain. “On this occasion we are venting our frustration and anger at the powers that be and the fact that we’ve had enough of them wasting time, money and resources whilst ignoring the fact that the poorest people in our society are getting poorer as the rich get richer…..basically we’re telling them they’ve had their chance now fuck off.”

The writing process can differ from song to song but most often than not it starts at a rehearsal with the band all in one room. Someone will start with either a beat or a simple line on bass, guitar or synth and away it goes. Most of the time we do a quick recording of what we come up with and take it away to listen to. We all feedback at the next practice and adjust the song as we play. It’s a pretty loose way of writing but it seems to work really well for us as we like our tunes to have a groove. We’ve started to add more lyrics whereas before we were mostly instrumental. It’s good fun.

We all live in the same community in Hull…HU5, it’s where most of the creatives live and it’s central to all the best venues like the Hull Adelphi and all the best pubs and bars. A few of us knew each other as we’d played in bands together before or with each other at gigs in different bands. Three of us also played Sunday football together too. Leon and Paul met 20 years ago whilst both were working in education…we’re all mates which makes it a joy to be in.

We’ve been blessed in that we’ve played some incredible gigs over the last 4 years. Each experience has been unique. Whether it was travelling all the way to Barrow BUMS to play to 15 people or in front of our hometown crowd of 4000 people as headliners of the Freedom Festival 2019 we’ve loved it all. Gigs are where it’s at for us and we really love places like The Chameleon in Nottingham and Wharf Chambers in Leeds.

We’re all seriously into the adventurous and strange when it comes to music making. We tend to cross all genres and have slightly different tastes but I guess if push came to shove we’d probably all agree that we’d like Brian Eno to produce us. A lot of the bands he’s worked with cross all the tastes we have and he does love to experiment. We’d take a bit of Talking Heads, some Roxy Music and a pinch of his work with Karl Hyde and see what we’d come up with.

If we had a time machine we’d love to play with Sly & The Family Stone…we’d love to shake our hips to them whilst watching in the wings. Fela Kuti would also be right up there and we’d be fascinated by Fela’s political philosophy and bravery. There’s a load of modern day bands/acts that we’d like to actually play with…we’re waiting for the call from Lonelady whom we took our name from after one of her tracks.

We’re all really enjoying a bit of Yard Act from Leeds. They’re funny and funky with a nice art-pop edge. Mark from Bunkerpop put us onto them and they’re often on the Bunkerpop stereo at weekends. Lonelady is also a firm favourite.

Lockdown has been pretty positive for us as we’ve made sure we stayed on the front foot. We’ve released two singles, made two videos and written over a dozen new songs. We’ve also established the Fast & Bulbous micro-label into the public consciousness and added a new band member. So it’s been a pretty busy time.

We put our debut album out on micro-label Fast & Bulbous which is run from our home venue, The Hull Adelphi. It’s a double vinyl album that we recorded and produced ourselves before releasing in June 2019.

We really believe in the virtues of DIY and not only do we self-manage, book our own gigs and take care of artwork etc.. we designed our own logo which can be found on our tshirts, badges, patches and tote bags.

There’s loads of Hull bands putting music out digitally on Fast & Bulbous and a brilliant subscription Singles Club too. Find our merch and all the other bands on the label here:

The new track, Time’s Up, Lights Out was recorded at Young Thugs Studios in York with producer Jonny Hooker and mastered by Pete Maher (The White Stripes, Pixies). It’s about the frustrations of all the bollocks we get fed by people in power who shut you down by talking rubbish, avoid answering questions and then expect us to suck up to them. We’ve had enough basically, we’re declaring that there time is up and we want them to fuck off. They’re taking the piss and they know it.