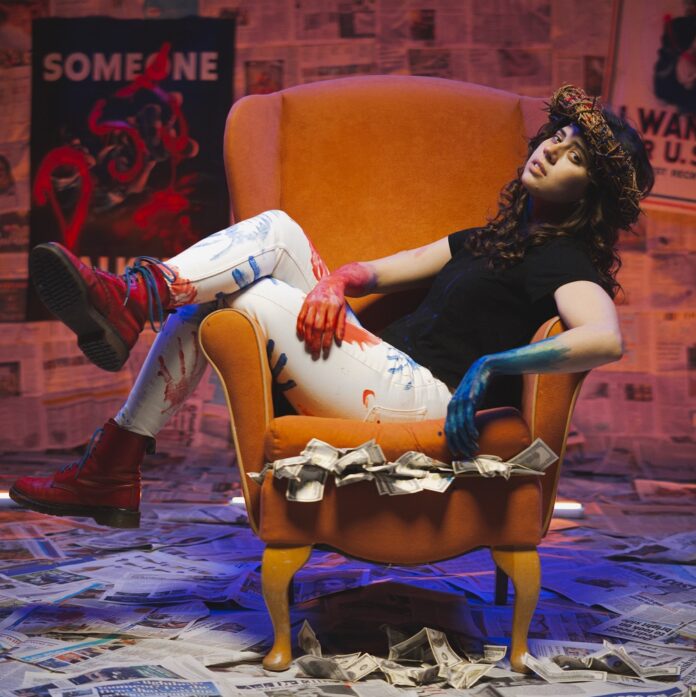 Born in London to American parents and raised in Berkshire, Deva St. John’s sound harbours a true sense of trans-Atlanticism. Bridging the gap between the sleaze and swagger of ‘70s British rock and its much more contemporary American counterpart. Deva succeeds in breathing new life into the blackened lungs of a genre that was struggling for breath.

Both a peerless vocalist and an honest lyricist, there’s a sense of authenticity at play that stems from the lo-fi alt rock production of her recordings. It’s something that in turn bolsters Deva’s lyricism, allowing her to channel her sensitivities into her own brand of contemporary and idiosyncratic alt rock while crafting song that peer under the veneer of modern life to express something fundamentally timeless, a yearning dissatisfaction; rock n’ roll in its purest form.

Her latest single ‘Preacher’ is just that. Three minutes of blistering rock ‘n’ roll that takes aim at those in power and described by Deva as “a fast paced, high energy commentary on the people who run the ‘free world’ – and how their methods may mirror the politics of religion” it’s the perfect introduction to Deva St. John for those unfamiliar, and for those that are, it’s a welcome return.

We caught up with Deva ahead of the track’s release today:

Introduce yourself in less than 10 words –
I’m Deva St. John, and I make big, honest, cool, alternative music. (I counted my name as one word!)
What made you get into music? –
I started writing music when I was a teenager – but because I was a conflicted and over-thinking actor at the time, it took me until late 2018 to actually do something about it. I love story telling and performing in every form – so, writing music is just another outlet. It’s also a great way for me to connect to myself in a way that I didn’t allow for beforehand. I lost myself in my work – I was just a bubbling ball of stress and ambition. I feel a lot happier now!
What’s the writing process? –
Normally, I’ll start with a hook, a melody or a lyric and try to build a song around that. I can – kiiiiiind of – get a song out of a piano or a guitar… but my band are so insanely amazing. I can usually just talk them through or sing the arrangement ideas and they can work it out on their instruments.
How did you all meet? –
So, I first met Andy (lead guitarist) years ago. It would’ve been 2011 or 2012. We’re from the same area, and he used to throw these massive house parties with his band at the time. They were so, so much fun. The “Poor Michael” parties! I’ve got a lot of good memories from those times – and a lot of forgotten ones! We didn’t get close until more recent years, though. I met Rory (bassist) and Stu (drummer) through my boyfriend, Sam. (Split The Dealer.) Before he started Split The Dealer, he was in another band called Ciircus Street. Rory and Stu played with Sam in Ciircus Street, and when Ciircus Street split up, Rory and Stu came along to play for my stuff and the Split The Dealer stuff. Rory brought Colin in (keys) after I expressed how nice it’d be to not be tied to a keyboard during live shows. Plus, Colin is crazy talented and the piano / synth parts sound MUCH better when he does them!
What was the last track you played on Spotify? –
The last song I played on Spotify was Eat The Rich by Aerosmith. I made a “Preacher Inspo” playlist of songs that either inspired Preacher or share a similar vibe. Either contextually or energy-wise.
What other talents do you have? –
Figure skating! My first dream was to become an Olympic figure skater. I skated from age four (I think) until about age fifteen. By the time I was fifteen, it had become apparent that I didn’t quite have the necessary discipline! The main thing I loved about it was the performance aspect. The dancing and the music. The jumping was fun – but jumping off of stage speakers into a big crowd is just as fun and precarious as jumping on ice.
If you could change anything about the industry, what would it be? –
For god’s sake, believe in women. We can sell out a great fucking tour if we just got the necessary exposure and support. It’s been depressing seeing festival announcement after festival announcement expecting us to be excited about another bullshit line-up. I love men, I love women, I love non-binary people, I love genderless people, I love everybody. What I don’t love, is being a token act, a charity case, a filler, a buffer, or a consequence of someone covering their ass. Book us because we rock, and people will dig it. Also, pay unsigned artists – that’s a big problem for everybody. We can’t buy food with exposure!
What’s in store for you when all of this is over?
When all of this is over I will be smearing myself all over the place! I’ll play everywhere. I don’t care if I play to an empty room! (Though, a crowd would be way more fun.) I’m so desperate to get back out and gig. We have a big headline show planned for the 25th September at The Waiting Room in London. It’ll be myself and Split The Dealer. I’ve never done a headline show before, so I’m super stoked. It’ll be really fun to dress the stage how we want, set the tone, sort the merch… ah, it’ll be so good. Acting-wise, I’m in the middle of shooting a drama with Uma Thurman for Apple TV and I’m booked to begin work on a major AAA video game in the Spring.
Where can we find out more?
I’m mostly on Patreon and Instagram! I’m also on Facebook and Twitter. You can find all my links here – https://linktr.ee/devastjohn
Talk us through the new track / video:
Ok! So, my new song is called Preacher. The main jist is, there are quite a few parallels between politics and religion. We basically live in a cult of money. We place importance on an idea and the perception of material wealth over actual living, breathing people. The video follows that “material power” vs “spiritual power” narrative – spiritual power being emotion, humanity, and empathy – and how spiritual power has always (and will always) be way more potent and destructive than material power.
Facebook
Twitter
Pinterest
WhatsApp
Linkedin
ReddIt
Email
Print
Telegram
Previous articleIntroducing Tiffany Twisted and New Single Sold My Soul
Next articleIntroducing The Roster and New Single Masquerade