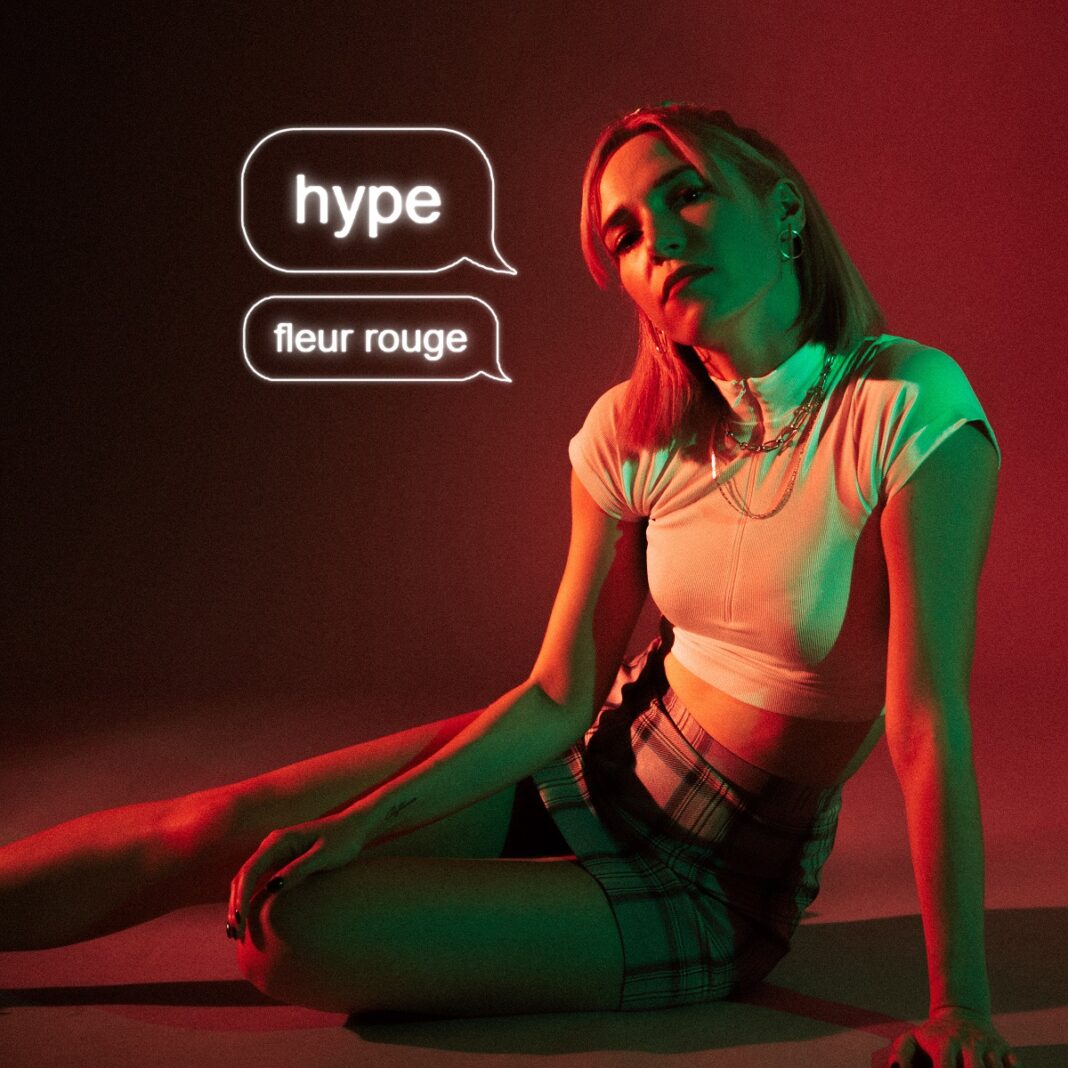 Half French and half English, Manchester-based (by way of London) Fleur was always going to stand out from her Northern contemporaries.

Indeed, while many of the city’s artists and bands are vying for a place in the annals of Manc Music, Fleur opts instead for something chicer, cooler, and more effortlessly understated.

With her debut single ‘Growing Pains’ earning her support from BBC Introducing Manchester, as well as Spotify’s editorial team who found a home for it on ‘New Pop UK’, it’s clear that Fleur’s own idiosyncratic brand of alt-pop is turning all the right heads.

Indeed, her new single, ‘Hype’ looks like it will do much the same. Fractured and frenetic, icy electronics form the track’s backbone while off-kilter percussion pushes it forward. Colder than its predecessor, ‘Hype’ offers up a darker and more introspective side to Fleur than previously seen.

Written during the UK’s lockdown Fleur explains, “it’s a reflection on losing oneself through technology, the selfie-obsessed generation. It’s not criticising though it’s just about being aware of how dependent we become on our devices.”

Fleur: I don’t think there was anything, in particular, I was just always passionate about it. When I was a kid I’d always be singing and would learn the words to every pop song. It was like an obsession really.

Fleur: It changes with every song but generally I’ll have an idea of a concept in my head or something I wanna get off my chest and the lyrics will just spill out. I like to write in a stripped back way to start with, so I’ll usually go to the piano find a chord sequence I’m vibing to and then keep playing until I hear a melody, once I have that melody I start letting the words come out. If I feel strongly about something it usually comes quickly. But even when it does, I’ll go back and tweak bits.

Fleur: An endless supply of filet o fish. Dunno why ppl think its gross I ACTUALLY RATE IT!

NR: If you could change anything about the industry what would it be?

Fleur: The money artists make from Streams on Spotify is peanuts and most people don’t realise that until I tell them! It’s pretty mental that from 1 mil streams an artist will make 3k off the back of that. Bit nuts and totally unjust so that’s what I’d change for sure.

NR: If you could collaborate with any band/ person/ producer who would it be?

Fleur: I’d probs say Billie Eilish although I get that’s a pretty obvious answer but she’s just so sick and I love how her lyrics and melodies are both important in her songs. There’s always a point to her songs like she genuinely has something to say which I think is what makes a song.

NR: What other bands/artists do we need to be checking out right now?

Fleur: If you haven’t heard of em already EASY LIFE are so so good! Love their sound and conversational flow it’s quality! Also, BIIG PIIG is a new female artist I’ve recently got into she’s very chill and incorporates a bit of Spanish flavour in her lyrics which is cool.

Fleur: I’d be lying if I said I’ve been okay through it all, I think the first lockdown was definitely the hardest as we weren’t used to it. Feeling quite anxious from not knowing when it would be lifted, also I’ve been stuck on U.C since March which has been tough. I know there’s a lot of people suffering though and a lot worse off so I don’t want to complain! Hopefully, it’s a time for us to all learn new things and also re-assess what is actually important to us. We have so much more time to think which can be a bit overwhelming but, I’ve found having a routine to my day has really helped me personally also EXERCISE just helps you feel more active and vent any of that frustration too!

NR: How is lockdown affecting the music scene?

Fleur: The creative industries in general have all taken a pretty hard hit! I think seeing smaller underground venues close as a result of the pandemic has been hard to watch. Artists, in general, can still write and put out music which I guess is a good thing but not being able to gig and connect with people does suck, not only because it’s such an important part of being a musician but also it is the main source of revenue for artists. Gigging is how we make money so that’s having a major effect on the industry.

NR: Talk us through the new track and video?

Fleur: Hype is about reflecting on losing oneself through technology. I didn’t want the song to be about criticising cos that would have made me a massive hypocrite. It was me acknowledging but also exploring how being so intertwined with our devices can have a negative effect on us. I wrote it during lockdown when I ended up spending even more time engaged on my phone, I realised my phone was the first and last thing I touched before bed which kinda creeped me out. So that’s how HYPE was BORN.

The video was filmed and produced by COSMIC JOKE. I’m so proud of it and worked alongside a sick team who made it what it is! It’s split between a normal version of ‘me’ and a ‘hype’ version. By the end of it I break away from the robotic/self-absorbed version that the girls portray through the dance. I hope people love it and it resonates in some way!

To find out more…