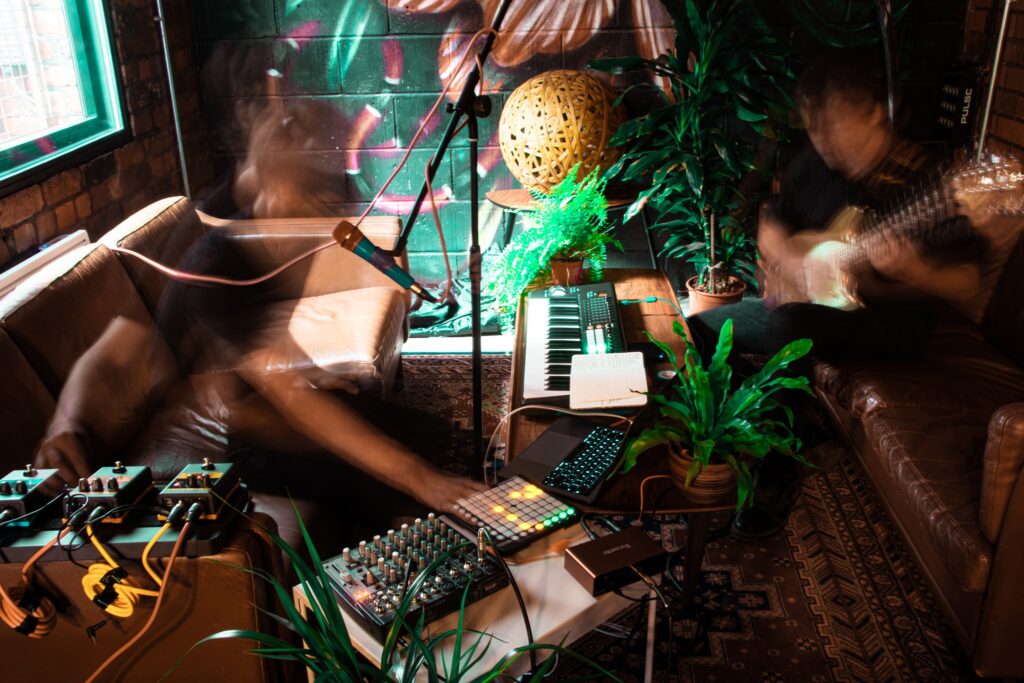 The sound that Flowers of Evil possesses is not a jovial one to say the least. There is enigma and confusion, a sense of melancholy and dread.

At times, the music may shine a light of happiness and beauty but you feel the joy, the groove, yet a sense of foreboding. That is what Flowers of Evil is. It is not just the music, it is a brain, and the music is the voice, which speaks for itself.

Getting Better is their latest single, released on 8th January 2021. This track is a whole different kettle of fish. Its lyrical subject is contemporary. Getting Better for Flowers of Evil means to them how much the COVID-19 pandemic has had a great negative effect on humanity and it’s that little click of the fingers, the little prayer to yourself, that it could be all over but knowing that we are long away from what was normal. The song is dreamy and so is the sound. It’s a welcome back to normal placard.

A two piece electronic project, it has guitar in.

Usually we begin with an idea that is sent over Whatsapp, it is either a basic of a song that Oscar has sent over via Ableton, or I have sent him an idea on the guitar and then we go from there. Since the birth of this project, we have adopted for the ‘ less is more approach’. From there, we add a fairly simple song structure, then add guitars, build the synths into the track,vocals and then it’s just texture,texture,texture.

Usually the music, then lyrics. Although sometimes we have ideas that are inspired by the poetry of Charles Baudlaire.

We met through college in Manchester. Prior to Flowers of Evil, I was asked to join Plastic Pills, the band Oscar was in at the time and still is to this day. Two years later though, a year later though we decided to create more of an electronic side project which became Flowers of Evil. It is not much of a side project now however it is important to balance the two.

If you could collaborate with any band / person / producer who would it be? If we were to collaborate with anyone, it would be someone in the likes of Thom Yorke, he has and is innovative in the sound he creates whether that’s with Radiohead or his solo work. What’s the best advice you’ve ever been given?

The Chemical Brothers or someone like Aphex Twin. They are very electronic so it could be interesting to have an electronic project where there is guitar too. It may add contrast.

Mr Matthew Fisher. Very talented producer. He makes his own music and has contributed to our recent single, Getting Better by recording, mixing, producing and singing. Can not thank him enough!

We are planning to sell merch, mainly t-shirts with our logo on them. They will hopefully be on sale in February.

I just think we are becoming more isolated. It is now weird to think back when we actually play on a stage in front of people or even be the audience. I sympathise greatly for the venues all over who are really struggling, it’s unfair. Now it is easier than ever to live stream gigs but we know it is not the same and we all miss the music scene. The live music scene especially.

The music scene from Manchester is great. There are so many different sounds coming out from that city. We wanted to become a part of that. It is just a shame we can’t see that in venue for example.

Our new single ‘Getting Better’ released 8th January is more of a catchy, groovy, pop like song, yet still possessing elements of experimentalism, and psychedelia. With some R&B too! Getting Better expresses the damage that the COVID-19 pandemic has caused throughout society. It’s that dream, that hope, that little prayer and it could all go away the next day, unfortunately realising that we are a long way from what we knew as ‘normal’.