Solo artist Garsa is back with another perfect slice of folktronic / Indie pop in ‘Ghosts’.

Ghosts is Garsa’s third release following on from his successful debut “Jimmy Sour Highs” and follow up “The Devil’s Own”. Garsa’s new single “Ghosts” is a catchy and upbeat Indie/pop number with layered synths and uplifting melodies which balance out the pensive and politically somber lyrics.

Northern Revive fired over our nosy questions to find out a bit more about Garsa’s new single “Ghosts.”

Northern Revive: What made you want to get into music?

Garsa: Listening to music and having friends who played instruments I suppose. I got an acoustic guitar at 16 and learned some easy songs. However, I preferred learning basslines so I bought a bass too. I practiced, got better and joined a band. I’m a bass player at heart but I like to dabble with other instruments. Consequently, it has led me to where I am now, but listening to good music resulted in me wanting to play it.

Garsa: Most of my songs start with me jamming a guitar part or bassline. If I like something, then I will build on that. Occasionally, I have come up with a nice melody or some lyrics and built the song around them. However, I generally find it easier to find the tune to the song first and put lyrics and melody to that.

Northern Revive: What was the last track you played on Spotify?

Garsa: I’m actually listening to Spotify as I write this. The song playing right now is Floating by Jape.

Northern Revive: What other talents do you have? (kazoo player, champion toast burner….)

Garsa: I’m a champion procrastinator, which is more of a hindrance than a talent. I’m pretty handy at making things out of old pallets and scrap wood!

Northern Revive: If you could change anything about the industry, what would it be?

Garsa: I’d make it a fairer industry. It’s well known for being a dirty business, and the bands and artists are generally the ones who cop for the crap. They get used, abused and thrown away without a penny to their name. That is what I’d change. 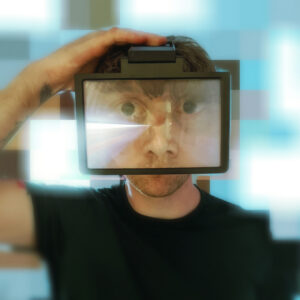 Northern Revive: What other bands do we need to be checking out right now?

Garsa: I play bass for Celestial North on her live ventures. She’s fantastic and definitely worth checking out! We’ve got a really good music scene here in Manchester too, pre-Covid! Some stand  out bands though that you need to hear if you haven’t already would be The Battery Farm, The One Eyed Generals Bandit, The Maitlands and All Hail Hyena. All seriously good.

Northern Revive: What’s in store for you when all this is over?

Garsa: For the time being I’m going to be sticking to writing and recording as much as I can. I only started my solo venture in January this year. So, I’ve not had to think about any kind of live shows due to the lockdowns. I’ve just been able to concentrate on my recording. When we see some kind of normality coming back to the music scene though, I’d probably look at trying to do this live with a couple of musicians to keep it live rather than just me and a laptop. I’ve no fixed plans for that yet though.

Northern Revive: How are you coping with lockdown?

Garsa: I’m coping OK. I’ve had it alright compared to a lot of people really. I’ve got my little home studio set-up so I can carry on creating. We’ve had to adjust to the homeschooling, which I’m sure every other parent out there will agree is an absolute nightmare! But overall, we’re good.

Northern Revive: How is lockdown effecting the music scene?

Garsa: What is happening to the music scene is absolutely devastating. This government have a hell of a lot to answer for! I’m seeing venues closing, bands splitting, crew, DJ’s, an endless list of hugely important people left in limbo. The music industry shouldn’t be having to go on protest marches to be seen! It is utterly depressing. The government need to step in now.

Northern Revive: What’s the scene like where you are from?

Garsa: Manchester at the minute is thriving. I’ve been playing the circuits since around 2000 and I don’t remember the Manchester scene ever being this alive with talent! Pre-lockdown you could go in any one of the many small venues, any night of the week and you would be pretty much guaranteed to see  a band or artist who would impress you. Don’t get me wrong, it’s not all good but on a whole; there is a cracking music scene in Manchester at the moment. We are all itching to get back out there.

Northern Revive: Talk us through the new track & video

Garsa: The inspiration for Ghosts came as a result of seeing a deer trapped on some private land surrounded by fences. It had managed to get in and couldn’t find its way back out. It got me thinking about the way humans treat the earth and the negative impact this has on nature, the environment and each other. There is a political message in the song which is quite self-explanatory when you listen to the lyrics. It touches on the way todays actions will affect future generations and to help make that point, my nine-year-old son Lachlan – the next generation – sings the final chorus.

You can find out more about Garsa’s new single “Ghosts” from these social links.