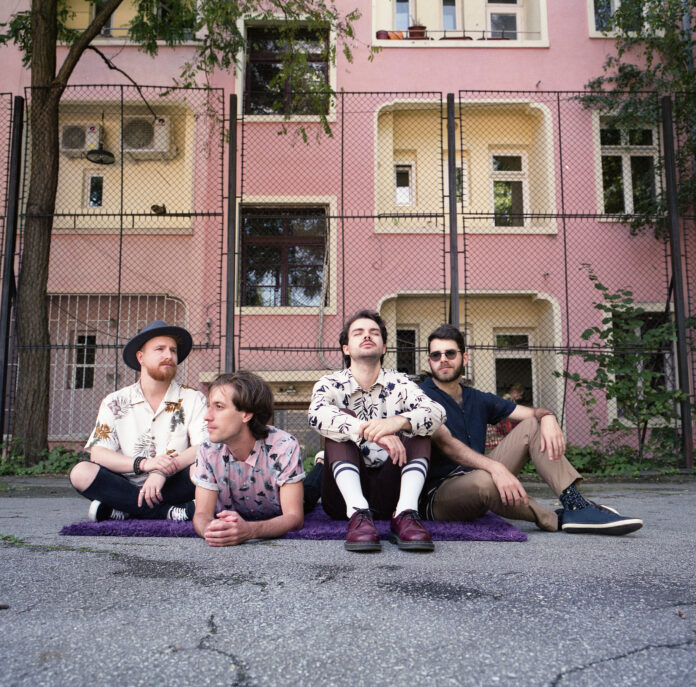 Though Manchester’s Hayes & Y might well have been attracted to the city thanks largely to its musical reputation, the four-piece share little in common with its largest musical exports. Eschewing the swaggering rock ‘n’ roll arrogance in favour of something cooler, sleeker and ultimately more refined.

With members coming from as far afield as Bulgaria and Finland, they’ve wasted little time in becoming fixtures at venues up and down the country, including the likes of London’s Dublin Castle, and Manchester’s iconic Night & Day Cafe, as well as a notable slot on the Spirit of Burgas festival in Bulgaria supporting Kasabian. Most recently, the band have been given the opportunity to participate in the digital edition of ESNS 2021 – the most prestigious showcase festival in Europe and The Netherlands’ answer to The Great Escape.

Like all bands, Hayes & Y have been hit hard by the pandemic. Rather than dwell on the gigs that could have been however, the band have channelled their creativity into ‘The Times’, the first of three singles to be released over the coming months, and arguably their strongest to date.

Premiered by the legendary US station KEXP, ‘The Times’ is three and a half minutes of frenetic indie-pop, backboned by staccato guitars and warm, understated synths. Described by frontman Blagoslav Anastasov as being “very influenced by 2020. It paints a post-apocalyptic picture, a couple of people watching the end of the world. I think that a lot of us feel like we’re living in some sort of a movie

and the last four years have been leading up to a grand finale of sorts. I hope that the worst is behind us, but it did influence me to write this.”

With the artwork designed by Sophia Dobreva who was in turn inspired by Camus’ ‘The Plague’, there’s a definite theme at play across the release. While 2020 was a year most of us would rather leave behind however, ‘The Times’ is a deliciously moreish offering that’s worth going back to time and again.

We caught up with the band following the release of The Times:

Introduce yourself in less than 10 words…..
We’re the best new band you’re going to hear today!

What’s the writing process?
Ideas come from our singer and songwriter Blago, he shapes the demos and we all try to get involved with ideas about arrangement and production. We record and produce everything ourselves in our home studio.

How do you transfer that onstage energy to the studio?
As mentioned, we record ourselves at home and we put a lot of time and energy to get things right, rather than rush through a couple of days in a booked studio. It’s a long process for us and we try to perfect every part on every instrument before sending it for mixing.

What come first lyrics or music?
Usually it’s music that is finished first, then come the lyrics.

How did you all meet?
3 out of 4 band members are from Bulgaria, we know each other from high school and formed the band back then. Dennis, our Finnish drummer, joined us in 2016, we met him in London and he fit the band straight away.

What has been the best gig you’ve ever played and why?
It’s hard to say, but it has to be our last sold-out show in Sofia, Bulgaria in the end of 2019. It was at one of the biggest venues there, the crowd was amazing, one of the best nights of our lives really. Can’t wait for gigs to come back and feel that energy again.

If you could open for any band / act / solo artist who would it be?
We actually had the chance to open for Kasabian in 2015, which is a pretty high bar set already. Hopefully, we can get it even further, there are a lot of artists that we love and it we’d be thrilled to play with, like The 1975, Parcels, Foals, etc.

What’s in store for you when all this is over?
We have a lot of music ready to be put out, 2 more singles coming out in the next couple of months, so we plan 2021 to be a busy one for us. It would be amazing to have the chance to play shows at some point during the year, fingers crossed it will happen!

How are you coping with lockdown?
Obviously, we were all affected by it, but we think we managed to stay sane, use the time to create new music and stay active as a band throughout this period. Plans were ruined for the whole year and the situation is still very unclear for 2021, but let’s hope for the best for the following months.

‘The Times’ is “a post-apocalyptic disco” tune, which will get you dancing straight away. We’re trying to expand our horizons with every release, so this one is a big step in that indie-disco direction. The lyrics on the other hand are not so cheerful and paint the picture of two people going through the end of the world together. The video was filmed in our closet in Manchester, we used every inch of it to get in the shot, but it was very well worth it!