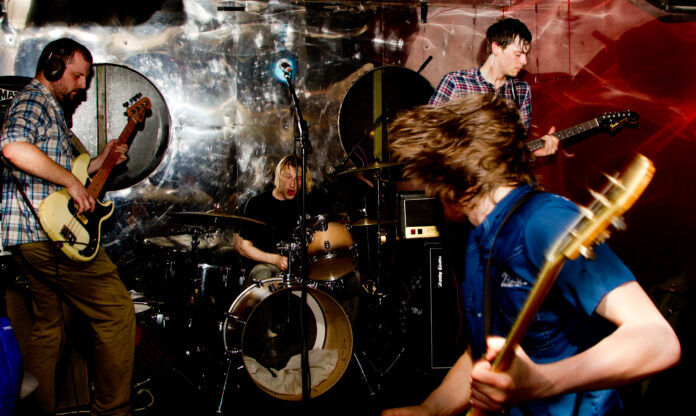 The Holy Orders were first told that their amps were too loud 15 years ago. Since then, the four-piece from Hull have divided the opinions of many sound engineers. The combination of strong songs, melodies, massive amounts of energy and huge dynamics has gained them a reputation as a ferocious live act.

Their debut album ‘For the Ears of Dogs to Come has been gathering praise ever since its release and has won the band many admirers including the BBC’s Tom Robinson who has championed the band saying: “Just when you’ve had it with Strokes/Interpol/Editors soundalikes along come The Holy Orders and restore your faith in indie guitar music”

He invited them onto The Tom Robinson Show on BBC 6music to play a session and, as well as playing them on his listener requested Now Playing show, they were his choice of new band when he selected his pick of songs on BBC 6music’s The First Time.

Since the release of the album, The Holy Orders have released a series of acclaimed singles and continued to wow live audiences with their intense energetic and challenging shows.

The band’s latest single ‘Prairie Dogs’ is a warning, an instruction, a scream for hope. It holds its breath through clashing chords and bursts through questioning what’s coming next.

The Holy Orders were approached a few years ago by fan and up and coming producer/engineer Nick Russell who asked if he could record them for an assessment. The band agreed and went into the studio with him to record a germ of an idea.  They were so happy with the results that when the germ evolved into Prairie Dogs, The Holy Orders got back in touch with Nick and asked him to complete the recording of the single.

‘Prairie Dog’ was mastered by Alex Wharton at Abbey Road Studios and the artwork taken by Deborah Simmonds.

Talk us through the new track:
“Prairie Dogs is a warning, an instruction, a scream for hope. It holds its breath through clashing chords and bursts through questioning what’s coming next.” That’s what the press release says so that must be what it’s about, eh?

I tend to have a song roughly formed when I bring it to the band. When I brought Prairie Dogs to the rehearsal room, it was a fairly simple song but we wanted it to sound a lot bigger than our previous stuff. We started playing around with both guitars playing completely different chords to each other and then really leaning into the clashes – we ended up feeling like My Bloody Valentine with the amount of noise we were making. We don’t have a specific process for writing but I think one common factor is that we keep playing with every new song idea until we find it really exciting – we’ve got to excite ourselves with what we’re doing.

Please Introduce yourself in less than 10 words…..
The Holy Orders have always been from Hull.

Cassettes, CD, Vinyl, download or stream?
I have thousands of CD and Vinyl records. I don’t really stream. I think some of the rest of the band stream quite a lot. I’ve got my own personal preference for the fidelity and ceremony of owning and listening to a record but that’s how I get the most out of music. I certainly envy people who use streaming to drink up and consume more music than I ever thought possible to have at the push of a button.

If you could change anything about the industry, what would it be?
We’d be more successful.

“You’re pissed, you’re shit and you’re too loud. Now pack up your things and fuck off” Unnamed Cleethorpes sports bar manager. Maybe this was not meant as “advice” per se but it should certainly be interpreted as advice to new artists. If you’re a loud left-field band who don’t make music to appeal to “the masses”, maybe don’t do the gig at the sports bar you’ve just been offered.

“Just when you’ve had it with Strokes/Interpol/Editors sound-alikes along come The Holy Orders and restore your faith in indie guitar music”
We’ve been dining out on this quote from (BBC 6Music DJ and musical legend in his own right) Tom Robinson for quite a few years but it still makes me really happy every time I see it on any promo. We’ve always prided ourselves on the fact that we’re not just sound-alikes and to have that recognised by such a great artist and music fan really meant a lot.

We can clear a sports bar.

If you could open for any band / act / solo artist who would it be?
Opening for bands is a really weird thing. You always think it’s going to be a big thing and will win you over loads of fans but, a lot of the time, no matter how hard you play and how great the show feels, ultimately, people are just waiting for you to finish so the band they came to see can get on. So it would have to be a band with fans who go and see gigs because they really love music and are open to seeing other great stuff – maybe someone like Girl Band or Shellac, or maybe Mclusky on one of their reunion* dates. Just any great band with great fans.

If you come across a good alternative guitar band that doesn’t want Steve Albini to make a record for them, they’re either lying or have yet to discover the pleasure of his recordings.

What has been the best gig you’ve ever played and why?
Waves Sports Bar, Cleethorpes.

How do you transfer that onstage energy to the studio?
The only way you can do that is by recording with someone you trust who gets what you’re trying to do. For Prairie Dogs we were asked by a fan, Nick Russell if he could record a song for us. You can’t really ask for more than someone who already likes what you do wanting to capture what they like about you in a recording – a lot of the real energy onstage actually comes from the perception of the audience so, if you can, get them to record what they hear.