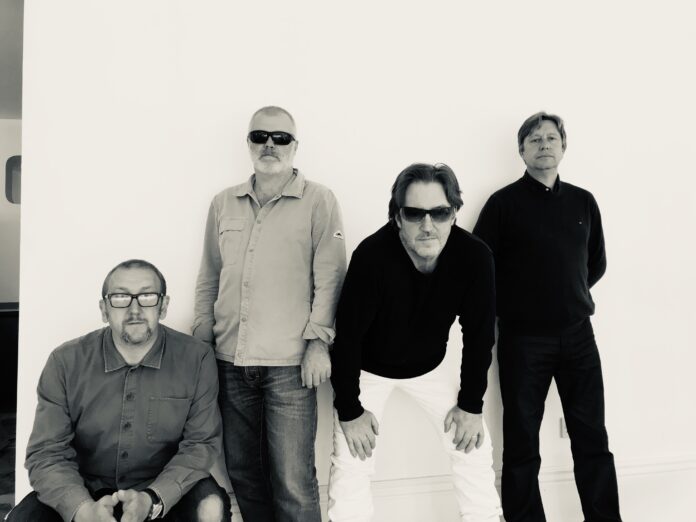 Forming deep in the winter of 2019, Oceaneers are a four-piece who succeed in merging both the classic and the contemporary.

Starting life when drummer David Stead joined John, Simon and Russ in a back garage in the Avenues area of Hull, it didn’t take long before the four of them hunkered down in a rehearsal room near the river and began to put together the album Light of The Whalebone.

Then Covid happened. Following a year when the wider music industry has been plagued with uncertainty, it made sense for the band to take things slow. Now however, with the world slowly starting up again, Oceaneers are ready to reveal themselves.

Their first release comes in the form of ‘A Brighter Day’. Described by the band as being “a psych/folk exaltation to that moment of euphoria when the train of pain and bad times suddenly, finally, thankfully, emerges into a glorious bright new light”, it’s the first taste in a string of releases taken from Light of The Whalebone.

In a testament to the band’s productivity (or perhaps to their abundance of free time over the last year) a further collection of songs has also been written and will be released in 2022.

Started a band at school with mates who shared a love of music and a spirit of adventure. Three of that original line-up of four are in this band many years later. It was also about freedom and autonomy – not having a boss and dealing with the world on your own terms, not anybody else’s.

This is an interesting question for us as we are yet to play a gig because of Covid, despite being very much a ‘live’ band. We rehearsed all the songs on the album as a live band because that helps with arrangements and is the best way of everybody learning and understanding their parts and the dynamics of the song. But although there are some great individual performances on the album, it’s very much a highly produced studio album rather than a band performance. That means you do lose some of the energy, immediacy and integrity of a band performance, but you gain so many other things in terms of control, sound quality, and the multi-layered depth the studio can give you. We gave ourselves up to the studio on this one.

Simon, Russ and John are mates from school. We’ve known Dave for years but there was a period when he was quite busy. He was the perfect fit when we needed a drummer of his calibre.

Fruit, mineral water, and a couple of bottles of Peroni just in case.

To make streaming a fair platform for artists.

A grave where daffodil and lily wave.

The song A Brighter Day underwent an incredible transformation as a result of the studio process. It went in sounding like the harder edge of Led Zepellin and came out like a folky ballad. We’re delighted with it and the changes it underwent are reassuring as it shows we went into the studio with open minds. Great credit for this must go to Dave Formula, not least for his production skills but also for the keyboard flute solo he wrote for the middle-eight. Another signature of the song is Charlie Jones’s dual vocal with John; a little below him in the mix but a beautiful, mellifluous accompaniment. We chose it as the first single because of how well it chimes with the hopeful release from the agony of lockdown. Our friends at Nova Studios did a great job with the video, capturing the journey into light but also the innocence of new birth, a sense of community, and the joy of release.