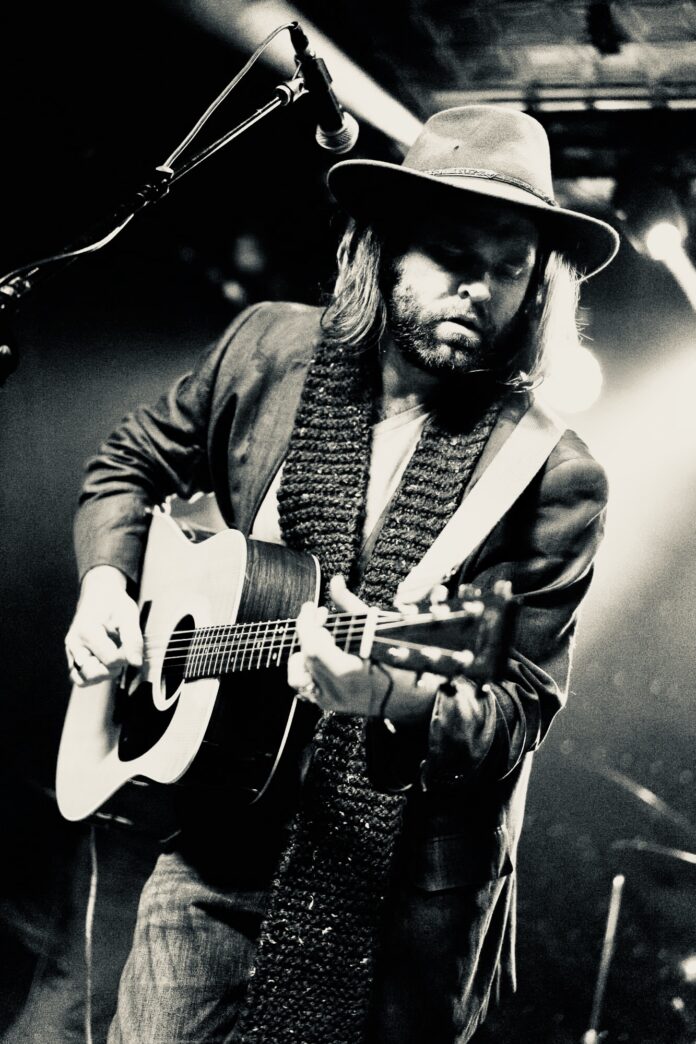 Denver, Colorado based outfit Hunter James and The Titanic specialise in creating Folk, Americana and Rock n’ Roll straight from the heart. Receiving previous support from the likes of 303 Magazine and Westword, this roots-rock outfit are certainly turning heads with their uplifting sound. Led by lead vocalist, songwriter and guitarist Hunter James, the group formed in 2018 and are back with their sophomore album “La Liberte”. Consisting of sometimes as many as  nine-members (see below to find the full band line-up), you’ll find the band reflecting on the memory of young love lost with a crying hope for redemption. Summarising the album; Hunter James shares, “La Liberte is about finding joy and meaning amongst the trudge of everyday existence”.

My mom nudged me into music at a young age putting me into piano lessons when I was a 5 year old. She was a huge music fan, but never really got the chance to do it as a career. Her love of old motown, soul and oldies records was formative in my taste and style as an artist. Secondarily, when I was 11 years old I was with my family in downtown Boulder, Colorado and I heard this wonderful sound coming out of a venue I now know to be the Boulder Theater. I begged my parents to take me in, at first they resisted but finally gave way to my pleas. It turns out it was a 21+ plus show so they weren’t going to allow me in. Somehow my Mom convinced the doorman to let us in as long as we stayed near the entrance of the venue. That wonderful sound I was hearing that night from the street was Derek Trucks and his band, and I think that show was my first real introduction to rock and blues music in a live setting. It was so loud, soulful and powerful, and to anyone who has seen Derek Trucks play guitar in person, a life altering experience. Within the next week I had borrowed my middle schools guitar and was learning my first chords.

Most times I just sit with an instrument and try to let my subconscious mind do the
talking. It’s important to not let your conscious logical brain get in the way too much.
Sometimes I see writers that have this great objective and finite goal for writing, to me
that isn’t really allowing yourself the full spectrum of creativity. Sometimes I have a
melody or something going into sitting down with the guitar or piano, but usually I just try
to open myself up to whatever comes forward.

We’ve always been sort of a studio band first and foremost, so it hasn’t really been an issue

Usually it is some type of melody without finite words, then you reverse engineer it to find
what needs to be said. Sometimes I’ll have one line or something that i try to build everything else around. A few times I’ve written verses without any music and then tried to add the music later, interesting process, but harder than starting with the music and finding your way to the lyrics.

We all met through the Colorado Music scene in different ways. I’ve known our drummer George since college (we both went to University of Denver). I always like to say this; every person in this band I have been personally awed by in a live performance (before they joined the band). I remember watching our drummer George play with Lamont Jazz Orchestra (college big band) and thinking that guy rocks so fucking hard! Even though he was playing big band swing, which you could argue does rock so fucking hard anyway, but you get the point. One of our guitar players Jason Brazzel I met at an open mic night. I watched him do his slide guitar and vocal thing and was just beside myself. He’s from Alabama, and he plays like it.

Late For The Sky – Jackson Browne

What other talents do you have? (kazoo playing, champion toast burner….

I’m pretty good at Yoga and I was a competitive tennis player through high school. Lizzy G., a vocalist and songwriter in the band played college soccer, so maybe we’re more athletic than we look.

I wish artists could still make money predominately selling records rather than through touring and sync/merchandising. The fact that the potential financial gain of selling records used to be so high I think put more emphasis on the art and process of record making. Although that sounds weird to say, that fiscal opportunity aided quality of art, I think it is true. I don’t like that recorded music has become devalued in a way because of streaming and piracy. People should pay more the have access to entire world’s catalog of recorded music. 10 dollars a month for a Spotify premium account is not enough!! The price needs to be higher for Spotify Premium, Apple Music, and if it’s too much of a cost to the consumer, then buy the physical record. It’s a crime the way recorded music has become devalued. Obviously as someone who records music for part of their living, I’m pissed about it.

Chase your destiny, that’s part of your destiny to go after it. And don’t follow too close
when driving.