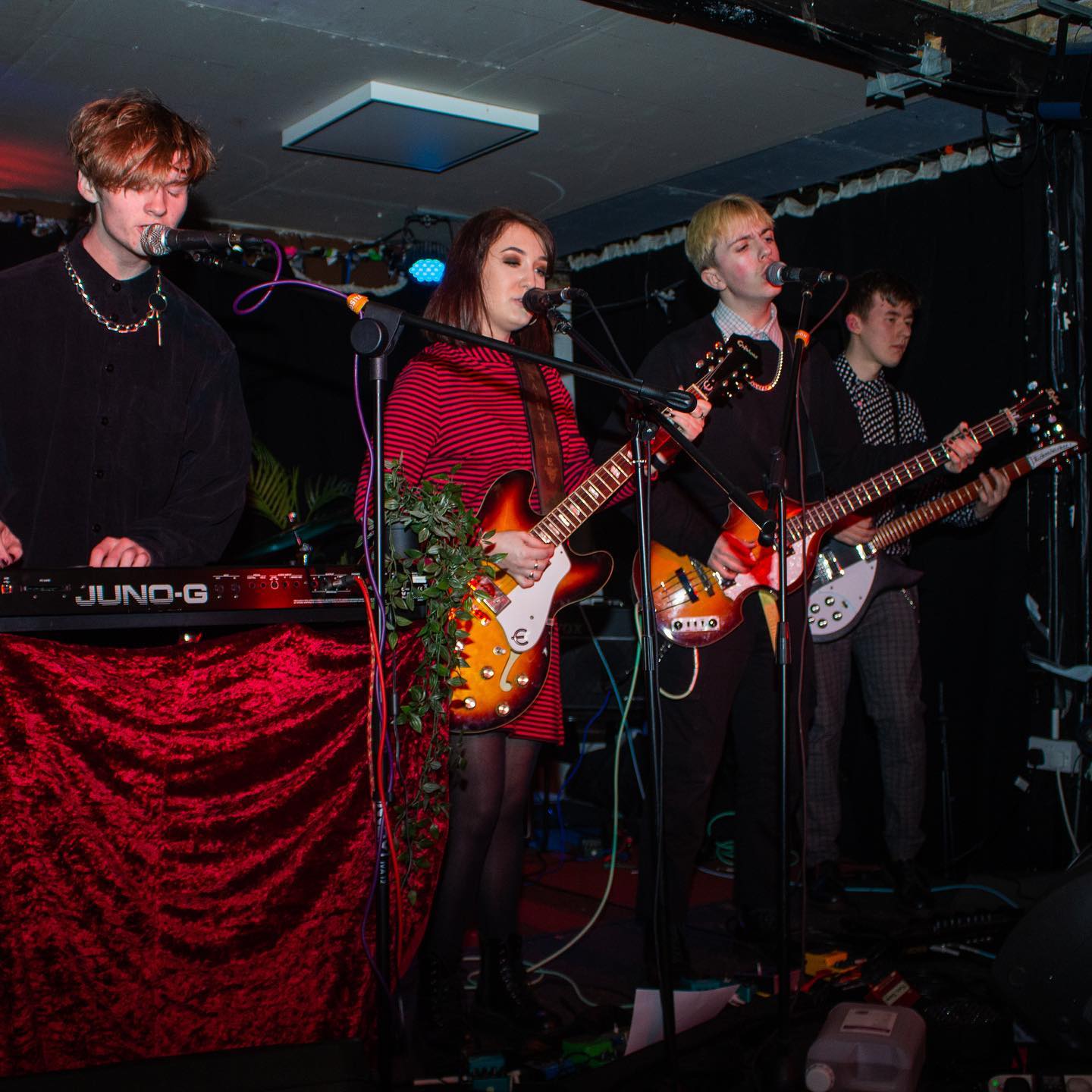 Hurray For Tuesday, taking their name from an obscure album found on keyboard player Sean Stott’s  bookshelf, are a 5-piece band from Bury, Greater Manchester that fuse the 80s goth-pop of the Cure with  the 2000s neo-psychedelia of MGMT and are known for their consistently captivating live performances.

‘Rain’s Gonna Fall Where We Walk’ follows as the spiritual successor to previous singles like ‘Where the Wind Blows’ and ‘Through the Rain’ by providing the listener with a very immediate song that will engage listeners on first listen with its energy, sonic density and melodic qualities and then with each subsequent listen will unveil more and more details in the arrangement. Among the many little details hidden away in the dense layers are twinkling glockenspiels, intricate harmonies, and warped electronics.

Well, these past three lockdowns have been very challenging both physically as a band, not being able to meet up and mentally, not being able to talk face to face or properly discuss ideas for songs and other band ideas, (e.g., artwork or recordings). In addition to my own challenges of being stuck at home, on my own, without my friends/bandmates does take its toll on you as a person. However, there have been some good things that have come out of the lockdown for both myself and the band. This includes me spending a bulk of my student loan on recording equipment and a majority of my time stuck in, watching YouTube videos and generally practicing my recording and mixing techniques. This culminated in me recording a lot of the tracks for both ‘Are you Sleepy’, (and mixed it), as well as another track, which is set to be released soon. – Harry

Since lockdown started, I have begun to acquire quite a few skills/talents over the course of the past year or so. I bought a bass in March last year and have really started to take it up and learn it properly, rather than just playing it how a guitarist would. This was just as I begun to really sink into a big Beatles phase and began to learn a load of Paul McCartney’s basslines as well as George/John’s guitar parts. In addition to this, I’ve also really taken to learning how to record, mix and starting to learn to master music, (as stated in the previous question). I’ve chosen a heavily producer orientated course at my uni and am learning to become a bit of a producer for some of our smaller tracks for the band (leaving the main ones to Mad Fox). – Harry

I’ve been told that I’m great at the Super Mario games and I can beat most of them in not a bad time, so if a career in Nintendo speedrunning doesn’t work out then I suppose I’m happy to stick with the band. – James
What would be on your rider?
I may not be speaking for the rest of the band here but I think my ideal rider would consist of a box of the red quality streets, a big box of especially room temperature ciders, a residential house for Sylvanian families (though I would happily settle for a terrace) and a cat for us to play with before the set. – James
How is Lockdown affecting the music scene?
The lockdown is affecting the music scene significantly, we almost saw the closure of the Deaf Institute a few months ago which was so scary to see since we have our gig planned there and it’s existence was threatened pretty quickly. Obviously our gig was cancelled too and it looks like even a year later it won’t happen. It has changed the way the music scene operates though because there’s be a tonne of livestream gigs though promoters like sunshine soul and shark wave records and I think that’s something that should be carried on whether there’s a lock down or not to let people who can’t make gigs see all the new music happening. – Abby
What’s the scene like where you’re from?
The scene in our area was thriving, we moved from doing gigs in Bury where a few were happening already with loads of other local bands to Manchester where there were even more going on at Retro, Aatma, Gullivers, The Castle Hotel and a couple other places. There is a really DIY feel to the music scene in Manchester especially with bands we know, since we just put on our own gigs at have all our mates come. What’s good about it that too is when we put our friends bands on too from different areas in Manchester their mates become our new listeners so it’s a great way to become known in the music scene, and everyone is just out to help each other and make friends and have a good night – Abby
If you could change anything about the music industry what would it be?
I would change how a lot of the industry is motivated financially rather than based off talent. As well as the bias f\of a lot of big companies who will favour a certain Sound, giving them better opportunity, if any at all. – Garfieh
What’s the best advice you were given?
And the beat advice I was given was in a band you all have to collaborate and it’s not about who’s playing the loudest or most complex, but it’s about what fits the song and working with each other to make an ensemble rather than 5 people playing the same song but individually. – Garfieh
What’s the last song you listened to on Spotify?
The last song I was listening to was They Reminisce Over You by Pete Rock and C.L. Smooth. I think i listen to it every day it’s always been one of my favourite songs. – Sean
Talk us through the new track
Rain’s Gonna Fall is a really really old song, I wrote it when I’d just started college so nearly 5 years ago now. It’s had a really cool life from starting as a Bob Dylan pastiche to ending up as this manic, chaotic and jangly song. When the I first brought it to the band sometime in 2019 it became clear at that time it was probably our best song and our first song that was more ambitious than just being a 2 minute indie-psych-pop song like most of our other songs were at the time; it has that breakdown where we tried to emulate a classical piece just using our instruments. So Harry used a volume pedal to make his guitar like a violin, Garfieh played a marching drum beat and our keyboardist at the time, Lewis Wrigley, played a classical inspired keyboard solo. This was really big for us because it was the first time we tried to do something kind of weird and it started a trend for us to include at least one new element in each of our songs that we have never attempted before, just for the sake of growth musically as a band. The track developed over time along with our sound in general and now I think the song really shines because of its frantic energy, linear progression, and detailed arrangement featuring chiming guitars, synths, a truly driving bass, harmonies, and Garfieh going HEY HEY HEY which is probably the best bit of any song we do. – Sean
To find out more:
https://www.facebook.com/HurrayForTuesday