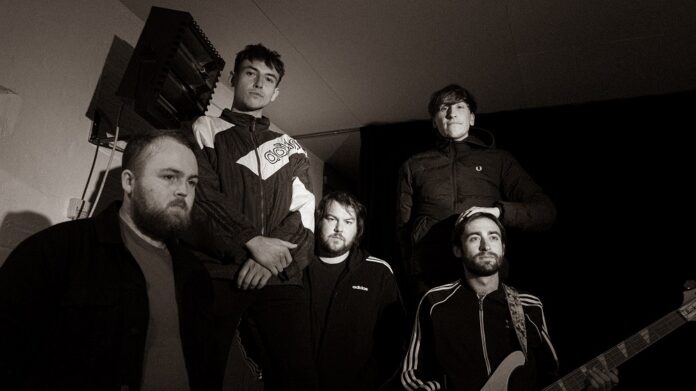 Though always a band for whom compromise means very little, South Yorkshire’s Intervene have taken the past 12 months pretty bloody personally. The result is an explosively unhinged single in the form of ‘The Conquering’ – a track that bridges ramshackle indie with post-punk swagger and snarl.

Three minutes of angular and anarchic energy,‘The Conquering’ feels as much like a statement of intent as it does a single release, while also acting as a testament to Intervene’s uncompromising attitude, which here feels more unfettered than ever.

“Compromise is a curse,” explains frontman Jack Constantine. “If no-one gets what they want, it’s all totally fucking futile. We’re all pretty wound up after the lost year of 2020, and if we’ve learned anything it’s that we can’t afford to waste any more time. No matter what this year throws at us, we’re set on finding our way out of the wilderness – where we’ve been for a last couple of years actually.”

It’s a sentiment that pulses through the course of ‘The Conquering’, two fingers up to a year of personal setbacks and what’s felt like a cascade of monumental fuck ups from the government. Born from sheer frustration it might have been, but the Conquering is nothing short of pure catharsis as well.

We caught up with the band following The Conquering’s release:

Introduce yourself in less than 10 words…..
Chaotic five piece from the depths of South Yorkshire.
How do you transfer that onstage energy to the studio?
We have the same energy whether we’re in the studio, on stage, or at home in our practice room. I think that’s how we know we’ve found the right group – we have equal amounts of passion and energy for what we do. We all agree that our practice room is where we sound best though. We’ve always had the same small room in a tiny village on the outskirts of Doncaster, where pretty much all our songs have been written. We’re always trying to replicate that sound in the studio.What’s the writing process?
I’m always writing stuff down on pieces of paper – little notes, songs or poems to keep myself entertained during the day. We usually start by seeing what works with each of the ideas that Tom and Steve bring to the session. Their ideas are usually really different, but we know when we’ve found something good. We definitely throw away far more than we stick with, but you should be self-critical. It’s the right approach.
If you could collaborate with any artist who would it be?
Damon Albarn is the master collaborator – we’d have to say Damon. Anyone who can get Shaun Ryder and MF Doom on the same album is alright by us.

What has been the best gig you’ve ever played and why?
Our local pub (The Angel Inn at Misson) is our favourite venue for hosting our annual Christmas party. Last time we crammed pretty much everyone we knew in there and it’s fair to say things got out of hand. This is true right – the management left that night and it’s been shut ever since. Probably nothing to do with us though.

What other talents do you have?
Well Steve can play every single TV theme tune from the last century, Tom is a gifted footballer, Adam hates his nan, Jim can speak the language of love and I know every word to A Roller Skating Jam Named Saturdays.

What would be on your rider?
When we play at The Leadmill we have a ritual of buying chicken on a stick from the shop across the road. So 4 of those, 200 Marboro Red, 2 bottles of spiced rum and some Red Leicester mini cheddars for Steve.

How do you transfer that onstage energy to the studio?
We have the same energy whether we’re in the studio, playing the main stage at The Leadmill, or at home in our practice room. I think that’s how we know we’ve found the right group – we have equal amounts of passion and energy for what we do.

If you could open for any band act who would it be?
Adam: Sleaford Mods
Jim: Talking Heads
Steve: The Stranglers
Tom: Paul McCartney
Jack: The Fall

What was the last track you played on Spotify?
Sleaford Mods’ Spare Ribs – we’ve bought it on vinyl as well though. It’s allowed if you buy the record too.

What’s in store for you when all this is over?
We’ve just recorded a load of singles and started our own record label with the help of a producer who’s worked with some major players, so this is the beginning for us. And as soon as we can play live, we’re going to be hitting it as hard as we can. We’re recording the music video for our next single soon, so you’ll be seeing that soon.

Self-released through the band’s own Major Player Records label, the latest single by Intervene is a three minute riot full of chaotic energy. ‘The Conquering’ comes as a statement of intent, and is a measure of the group’s uncompromising attitude.