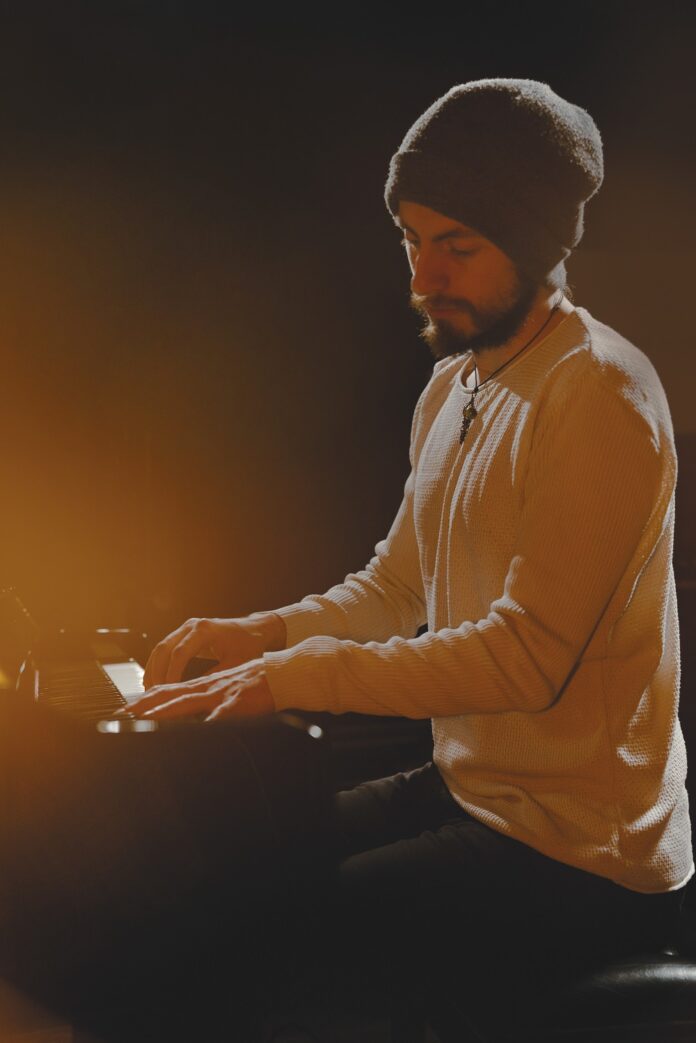 There comes a time in the career of a lot of producers where they’re no longer content with just making other people’s music sound better. It’s a time that calls for a shift in focus; for a producer to start looking inward, as opposed to outward.

Having spent much of his career so far behind desks for other artists, for London-based multi-instrumentalist Jack Beech, that time came in January 2021 when, having suffered with what turned out to be COVID-19, the lethargy of illness was replaced by a spark of creativity and the foundations for his Noctilucent EP were laid.

Four tracks of delicate strings, emotive piano and subtle, shifting textures that feels as beguiling as it does uplifting, all the while harbouring the elegance of artists such as Federico Albanese and at times, the freneticism of Bonobo. It’s an irresistible combination, one that feels most obvious in the EPs lead single Blue Hour.

“’Blue Hour’ and the Noctilucent project as a whole, are inspired by the euphoria when having full clarity in a perfect moment” explains Beech “I’d like to think it creates an elevated feeling inside anyone who listens, but also inspires listeners to seek experiences which make them feel elevated or complete”.

This sense of elevation could stem from anything: catching a sunrise when still up from the night before; an early morning for a flight or hiking trip – anywhere there’s a sense of anticipation, of expectation, and of euphoria. These feelings are all manifest across ‘Blue Hour’s skittering percussion, woozy synths and  the steadily mounting sense of calm that builds across the track’s three minute run time.

Following on from a year of uncertainty, both physically, mentally and socially, Noctilucent is the antithesis of that uncertainty. Bold, confident and cathartic, it’s the tentative sound of finding peace within yourself, and of embracing life again.

We caught up with Jack following the track’s release:

Hey Jack, thanks for taking the time to answer our questions. Can you introduce yourself in less than 10 words?

You’ve just released your debut single Blue Hour. How does it feel to get your first track out there?

It feels massively liberating! It’s something I’ve thought on and off about for years however I have never really found a style that has naturally resonated with how I feel until recently. Any creative who doesn’t identify with what they create will often feel like what they do isn’t good enough, and becomes hugely frustrated. I found that for a few years so this is massively liberating!

Can you tell us a bit more about it?

Blue Hour is a simple concept. It is a time of day that holds great energy and potential which I wanted to capture through the sky tones. Starts off slower and simple up to the moment the sun rises.

Particular examples energy wise could be the excitement / anticipation of a day when waking up for a particular activity. Or alternatively, you could still be out from the night before, enjoying the closing euphoria of what has been a great night.

The track’s entirely instrumental, do you find it easier to convey emotion within your music without lyrics?

Massively easier! Given my own vocal is somewhat limited it is hard to invest in a full emotive performance. When you combine that with being highly expressive on piano, and actively encouraged to improvise classically, you end up writing music that naturally shy’s away from vocals as you’ve embedded the melodic fluidity in the instrumentation.

That being said, a track from the EP will feature a lead vocal and I’d like each project going forward to contain a singer collaboration.

It’s also the lead single from a forthcoming EP, what can we expect from that?

The Noctilucent EP is largely a reflection on being at one with yourself again having been at odds with yourself so it features the same positive textured atmospheres as Blue Hour. However, it is a little more experimental instrumentation wise. “Flickers” for example contains a fantastic modular synth breakdown written with Stewart Whitmarsh, a Brooklyn based electronic artist.

What was it that made you gravitate towards ambient/neo-classical music over a more typical band/solo artist route?

I’m by nature a classical pianist however my roots in the audio industry are music production. I’ve produced records for the last 4 years and as a result I now love writing beats and creating unique textures so it seemed natural to fuse the two. It is an exciting genre too as there are limitless ways artists are now creating sound making the musical fusion possibilities endless; keeps things fresh.

With lockdown restrictions easing and things beginning to get back to normal, what are some of the things you’re most looking forward to doing?

Embracing more culture and travelling which is a huge passion of mine. I take a lot of inspiration from different art forms and places which has naturally been on hold this last year or so. I’m feeling quite eager to get back to that.

Who’s an artist or producer you’d most like to collaborate with?

A lot! Vocally I love hearing English sang with foreign accents, I find it brings a different emotion to music we hear every day. Hania Rani or JFDR would be amazing examples of this.

With the EP release not far, what’s next? Are you working on any other projects?

Solo project wise, there will be a follow up single after the EP sometime later in the summer. A similar style but the aim is to expand the string arrangements into more of a quartet so it’ll be a slightly more detailed in the arrangement, and perhaps a little more cinematic.

I’d like to do more visual work too creating visual art to go with the what I’m writing so projects can be more expressive and engaging.

Finally, any parting words of wisdom you want to leave our readers with?

Particularly for anyone suffering with creatively due to mental blocks, share your art with people around you, it really helps build a stronger belief in yourself when people relate to what you do. Collaborate also, it helps build the excitement behind what you are writing when you can share the creative process with other people.