On Friday 14th of August KICKED IN THE TEETH will be releasing brand new 7” single DEATH ADVENTURE alongside a reissuing of their debut SELF TITLED LP available on vinyl for the first time.

KICKED IN THE TEETH formed toward the end of 2018, heavily influenced by punk and big riffs the band received a great initial reaction to their live gigs, drawing comparisons from classic bands like CRASS, POISON IDEA and BAD RELIGION through to more contemporary acts like IDLES, PIGSx7 and SLAVES.

In the summer of 2019 they recorded their debut Self-Titled album, this was released by fledgling label RARE VITAMIN RECORDS in the autumn of 2019. Initially only available on CD and online platforms the album went on to receive phenomenal reception; the album is now being re-issued onto 10” vinyl for the first time alongside new single ‘Death Adventure’.

Northern Revive: Introduce yourself in less than 10 words please chaps
Chris – Me? Bit fat, reasonably pleasant and happy to be here.
KITT? Full throttle music for laid back people.

Northern Revive: How do you transfer that onstage energy to the studio?

Joe: We record the drums, bass and guitars live then overdub the vocals and any second guitar parts. Its fast its friendly and we like working this way. Gives fast results and and honest feel.

Northern Revive: How did you all meet?

Jay: We all met around the turn of the century around college era, though I got to know Chris our drummer at high school as him and his friends in the year above took me under there wing as a fellow lover of punk. I met our bassist Mike at college, and Joe through mutual friends soon after. We all just gravitated towards folks wearing band t shirts we were into I guess. Mutual friends, bands playing together, before you know it, it’s 20 years later and we still drink together.

Northern Revive: What was the last track you played on Spotify?

Mike: Track I last listened to on Spotify is “Self Esteem” by The Rival Mob, just getting into this band, parts of their music remind me of “Bigger than the Devil” by Stormtroopers of Death which is one of my favourite albums.

Northern Revive: What other talents do you have?

Mike: Other talents include a cracking impression of Elaine Page laughing and topiary with hedge trimmers. Sometimes I do both at the same time

Northern Revive: What’s the best advice you’ve ever been given?

Jay: Work hard, live cheap, graze on all the grass you can eat – Sam Stevens 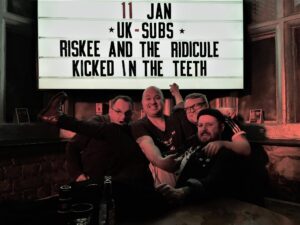 Northern Revive: What’s in store for you when all this is over?

Chris: I think with any stressful situation it brings out the best and the worst in people, it also brings out the opportunists, but that’s all human nature, I think it’d be nice if people were a little more grateful for what they have after this, but more than likely it’ll be back to the usual, best thing to do it concentrate on the things you can control and put your time to things you enjoy.

Northern Revive: How are you coping with lockdown?

Mike: Coping with lockdown wasn’t too difficult for me but I really miss playing gigs, the whole point about playing in a band for me is playing live and the interaction with a room full of people when you are turned up to eleven blasting their ear drums, hopefully it won’t be too long before we can do that again but until then just gonna have to drink beer and listen to some heavy music.

Northern Revive: How is lock down effecting the music scene?

Chris: I run The Salty Dog in Northwich, so from that point of view it’s totally on hold, we have just opened up again to operate as a bar and are looking into a few bits to do outside, but on the whole it’s really put a stop on things. To paraphrase Goodfellas, people have done what they needed to get by, so we’ve done a few fun little covers and videos and a lot of people have been streaming and trying different things, for me though there isn’t a substitute for spit and sawdust gigs, I am in somewhat a biased position though.

Northern Revive: What’s the scene like where you are from?

Joe: it’s nowhere near as busy as it used to be but there’s always been some really great bands and artists that are from Northwich. Deja Vega are the most notable at the moment locally and seem to be growing in stature all the time. Nice people too which always is the most important part.

Northern Revive: Where can we find out more? (also flog us some merch we love tees…..)
Joe: You can get the merch from our Bandcamp or on the Rare Vitamin Bandcamp.
https://kickedintheteeth.bandcamp.com/
https://rarevitaminrecords.bandcamp.com/

Northern Revive: Talk us through the new track and video

Jay: the video for Death adventure was a one take video done in our practice room on a go pro by our mate Mikey Tightroll. Did he drop the camera on purpose or by accident? We will never know….. a song about taking the easy option in life, saying no, and just walking the easy path, a reminder not too!