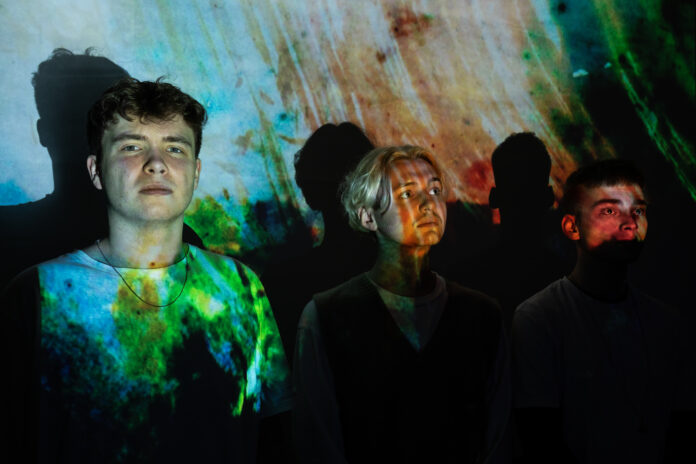 Like all bands, Leeds-based LELO were hit hard by the pandemic. Forced to abandon a UK tour as nationwide restrictions came into play, LELO did the unthinkable.

When all their contemporaries took to social media livestreams and listening parties to replace regular gigging, LELO went off grid. This allowed the band to turn their focus to writing, and something of a transitional period for the band followed.

LELO’s latest single, ‘Faceache’, is the band’s first since 2019, and bridges the gap between pre and post-pandemic LELO.

Frontman Ronan Peaker explains, “Faceache has been kicking around in my head for quite a while. I wrote it whilst living somewhere I really didn’t want to be. That situation really made me analyse who I was, and thinking about it, I probably beat myself up a bit too much about things that really didn’t matter. But that was so cathartic at the time, and I believe a lot of people will share those feelings that come with late night overthinking.”

Deftly balancing feelings of both anxiety and optimism against a background of lush guitars and electronics, ‘Faceache’ is a welcome return for the trio, and one that works as a statement of intent for the rest of the material to follow.

With this being the band’s first single in almost two years, they’ve followed up the official video with an artistic offering in the form of a lyric video.

In collaboration with the West Yorkshire DIY label collective Learn Fear Records and videographer Alex Kershaw, LELO have created a stunning video to accompany their ethereal new track by using a unique ‘cameraless’ method of production. Scheduled for release on 23rd July 2021, frontman Ronan Peaker explains just how they did it:

“We were interested in making another music video using film, but not doing it in the traditional sense of loading some Super 8 into the camera and running off into the sunshine! We wanted to experiment. So instead of exposing the film through the camera lens, we scratched away at the emulsion layer of some old unused 16mm film, and we painted on the film with some Indian inks. It’s a really messy and time-consuming process that requires patience, a steady hand and not too much coffee!

The scratched and painted rolls of film (50ft in total) were then digitally scanned, and returned to us as Quicktime files to play with and allow Alex to edit the footage to the track. And Voila!”.

We caught up with the band following the release of the track’s second video:

Ronan: I’d written a solo EP under this new project that I’d called LELO, and I needed a band to help me play it live. So, I just put a link up on our Uni Facebook page and asked if anyone fancied it. Tom and Aaron both got in touch and we haven’t looked back.

Ronan: ‘Faceache’ is about overthinking. We all do it, late at night when we should be sleeping.

I was living in a situation that wasn’t all that great for me, and I ended up spending a lot of time over-analysing myself and how I behaved growing up.

I realised that I’d changed an awful lot in a short space of time – almost certainly for the better – but in doing so, a lot of traits I did have that you might consider to be positive, were lost.

My confidence was nowhere near what it once was, and that kinda scared me.

Green Gardens are great, and a bloody lovely bunch of gents.

Ophelia is a great new artist that has just released a properly beautiful debut, and bdrmm’s debut album is still on repeat for me.

Ronan: It’d have to be Slowdive for me. I love the band, and I remember seeing them play at Leeds Town Hall a few years back. It was the best sounding show I’ve ever experienced. I’d love to see how they do it close up.

Tom: To be honest I’m not fussy. I’m normally doing the driving if we are playing away, so I’ll stick to the fizzy pop and usually have a pre-show beer – and that’s my lot! If we are lucky to get a rider it’s got to be Stella and maybe some crisps. Poppadoms, please!

Ronan: Me and Aaron write most of the music together at home. Then we show it to Tom and get his drum ideas down.

I tend to write the lyrics. They’re typically pretty introspective, and previously I wrote a fair bit about love and all of the ways it manifests itself. But now I’m pushing myself to write more about larger issues and subjects that extend beyond myself.

Ronan: I wasn’t given it personally (obviously/sadly), but David Bowie’s advice to creators about walking out further into the water has always really stuck with me.

It’s about going out of your comfort zone and finding that place where you’re truly testing yourself. That’s where great things are made.

Tom: Tough question. I’d love to write some songs with Alex turner. Growing up his music has always been a constant and I’m a big fan of his lyrics, string arranging, and his riffs.

And for live, I’d wanna support my other man-crush on the drums, John Mayer.

You can find us in all the usual places, but, if you really want to support us- head over to our website and sign up to our mailing list, follow us on your preferred streaming platform, or even grab a record from our Bandcamp store.