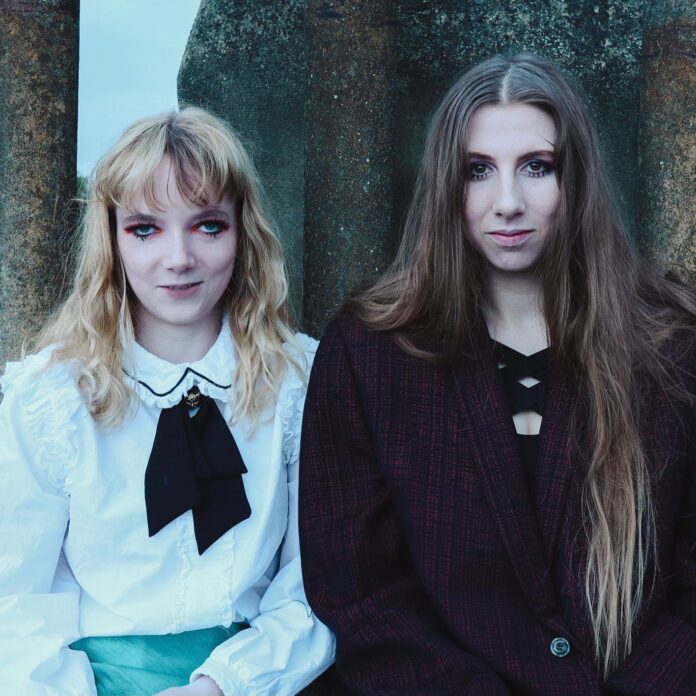 Wednesday’s Child are a London-based duo for whom convention means very little. Blending together jazz and psychedelic rock, and imbuing it with a true punk spirit, the two-piece are difficult to pigeonhole, and impossible to ignore.

Emily Roberts and Georgia Williams began collaborating during the UKs various lockdowns across 2020 and 2021; out of isolation grew connection, and this journey can be traced through the lyrics and sonic progression found in their debut EP due at the end of October. The EP was recorded in an insular and secluded way, mostly in their own bedrooms, and is both written and produced by themselves. The result? A confident and curious new sound in the form of a five track EP.

Lead single ‘Begin Again’ is the first taste of said EP, and indeed the first ever release for Wednesday’s Child. Four minutes of hypnotic and woozy, esoteric pop, there’s both grandeur and whimsy at play, entwining to create something truly unique.

With both Roberts and Williams coming from different backgrounds (music – specifically Jazz, and acting respectively), that the band should harbour such an eclectic sound should come as little surprise. With influences as wide raging as John Cooper Clarke, The Beatles and Amy Winehouse, such eclecticism becomes even easier to understand. That said, while there are echoes of the above across Wednesday’s Child work, they embody no-one but themselves.

‘Begin Again’  was the 2nd full song we ever wrote and recorded together. Early in the year, Georgia brought a couple of verses and the chorus to Emily which we developed into a full song together. The lyrics have biographical content as well as some nonsense poetry, and all the things we’ve been thinking and feeling mashed together. We will also be releasing the accompanying music video, so keep a look out for that.

We write everything ourselves, and the process seems to keep changing. Sometimes one of us has a song already written which we then bring to each other and rework, other times we build from scratch together. But no matter where it comes from, we’ve found that with each song there’s always one session in which we finally push through a membrane and reveal the song we’ve been making all along.

Emily: I feel really inspired to write by people around me and listening to other bands on the scene who I find particularly inspiring. I also just love the feeling of creating something new from nothing.

Georgia: Recently it’s been feeling unheard, unrepresented or just generally unsatisfied and needing to do something about it. Right now.

Georgia: I have two solid impressions – Gollum and Elvis.

Having to negotiate through the Covid lockdowns was tricky, but this is actually how the project began, where we were sending each other voice notes and ideas for the other to develop. We also funded the whole project ourselves, and so that was a challenge in itself. Now we’re both skint, but really happy with the Single and EP!

More opportunity for women and marginalised groups, and that isn’t just about music, the industry simply reflects and continues our larger societal structuring. Also, more space for artists to be inconsistent and create different projects when they want to – experimentation and change keeps this whole thing going.

If you’ve got a wrong note to play, let the world hear it. Be strong and wrong. Shit happens then you die.

Georgia: So You Want to Be a Rock n Roll Star by The Byrds

We are kinda the opposite in that we started in the studio (our bedrooms) due to Covid and are now translating that sound onto the stage. We had a lot of creative freedom and energy when recording the EP, so we are working to make the gigs equally exciting and visceral experiences.

Both of us are from pretty rural areas, so there wasn’t much of a new music scene. Now that we are both living in London, it’s the polar opposite and there’s a lot going on all the time.

Emily: My mum would take me to the occasional classical music concert when I was young, and other than that I would just listen to my Mum and Dad’s CDs, which were a broad range from jazz to rock and I also used to play in a few school bands.

Georgia: There was always music in my house growing up; I had Judy Garland playing on loop, my Mum was listening to The Beatles and Led Zeppelin, my Dad to Elvis and The Clash, and my Brother was introducing us all to newer music with strange sounds. There was the occasional barn party in my village where everyone would come together and play a bit of skiffle or folk.