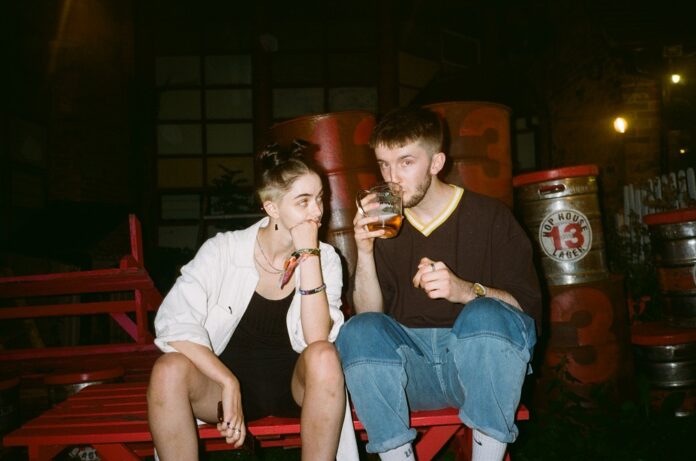 Off the back of their 2020 debut single ‘Flowers Grow’, The Book Club return with an energetic and uplifting indie pop-rock anthem in the form of ‘Pursuit of Happiness’.

Fusing their signature ethereal, dreampop sound with soaring, melancholic melodies, euphoric layers of guitar and Em’s crystal-clear, mellow vocals, The Book Club have hit upon the indie sweet spot with some serious instant-classic potential. The duo’s relatable lyrics and refreshing approach to finding happiness is sure to resonate with pop fans and indie lovers alike, and The Book Club have hit upon a sound that is unequivocally their own.

Alongside the track, the pair release an accompanying video with retro, DIY-esque visuals that capture the essence of their bedroom-pop. sun-soaked sound with a playful vibe, showing that The Book Club don’t take themselves too seriously yet still demonstrates the duo’s unlimited creative potential.

Discussing the new single, The Book Club share: “‘Pursuit of Happiness’ is about learning to stop searching for that next hit of dopamine and instead utilise the people and opportunities around you to give you happiness. Pursuit of Happiness init.”

The Book Club consists of Jake Hilton and Emily ‘Em’ Price. Em, originally from Hertfordshire, is a classically-trained singer who has her start in music at The Purcell School before enrolling in a creative music technology course at The University of The West of England. Jake, from Buckinghamshire, has always had a strong love for music and first picked up the guitar at the age of four. He is currently a Music Production student at BIMM Manchester.

The pair were introduced at a National Youth Music Camp in Milton Keynes as early teenagers and came together to form The Book Club in late 2019. Creating a sound that includes elements of dreampop, indie rock and alt-pop, the duo have spent the past year honing their sound and have now reached a point where they are ready to share their craft with the world. Expect some ‘filthy bangers’ and euphoric, ethereal soundscapes from this dynamic duo.

Please Introduce yourself in less than 10 words…..
Indie Dream-pop duo, with LGBTQ+ lead singer, based in Manchester.

What made you want to get into music?
We have been musicians all our lives, Em comes from a classical music
background and Jake has been playing guitar since the age of six. After
meeting at a National Youth Music Camp aged 14, we played together
and eventually found that we sounded good as a duo! Since then, we
have been combining our music styles and writing together to create
‘The Book Club’ Sound.

What’s the writing process?
Being in separate cities, we begin our writing process remotely. Jake will
send Em a chord progression, or a guitar part, and Em will try out a few
different melodies and send it back. When a melody has been decided
on, Em will start writing the lyrics and Jake will begin building up the
drum and bass parts. Then we come together to produce a demo,
including synth and pad parts before recording the song professionally in
the studio.

What comes first, lyrics or music?
For us the music comes first. Although Em consistently is writing
snippets and quotes that we think could make a good lyric in a later
song. These small lines are usually changed to fit whatever melody has
been created.

What inspires you to write?
We are inspired a lot by the struggles we have dealt with in our past,
specifically homing in on LGBTQ+ issues and difficulties with mental
illness that Em holds very close to her heart. Being a part of the
LGBTQ+ community themself, they feel very strongly about having the
unstigmatized representation of wlw relationships and genderfluid/trans
communities present in society.

Who has had the most influence on your music?
Our Producer Robert Whiteley has probably had the most impact on our
music. He has helped us find and create the sound we are so happy
with, and his unending knowledge has helped us improve our own
abilities when it comes to the production and writing process of our
tracks.

How did you all meet?
We met at a National Youth Music Camp when we were 14, we
continuously returned to the course every year, and became closer and
closer friends each year. By our final year we were performing together
and carried this onto the next year, returning to the music camp as
visitors, where we then decided to form The Book Club.

Who is the most annoying band member?
Being a band of two members, we both believe the other to be the most
annoying!

What would be on your rider?
Our rider consists of guitar and bass amps, a microphone and a drum kit
without breakables. We also use the PA system to play the backing
track, which has the other guitar parts, synth parts, general effects and
backing vocals.

What other talents do you have? (kazoo player, champion toast
burner….)
Em was raised in a classical music household and passed their grade 8
oboe exam when they were in year 10. They have played in multiple
orchestras over the years, and performed in concert spaces such as
Cadogan Hall, the Royal Albert Hall and the Purcell Rooms. They also
passed their grade 8 singing (classical, specialising in baroque) in the same year. Now at university they are involved in the orchestra, playing
both oboe and cor anglais.

Jake: Has experience with playing: Drums, Piano, Bass guitar, trumpet.
Music is about the only thing he has going for himself…thankfully.

What has been the biggest challenge in your career so far?
The separation between us has made it tricky to consistently keep up
our writing processes, as well as finding the funds to see each other in
our different cities to rehearse for our live performances.

Cassettes, CD, Vinyl, download or stream?
Pursuit of Happiness is available on all major streaming platforms, and
there are 20 limited edition cassettes available to purchase from our
bandcamp page!

If you could change anything about the industry, what would it be?
We believe that everyone should have the ability to be creative and
express themselves without fear of retribution or hate. If what you are
saying or expressing is not damaging or hurting anyone, it should be out
there for everyone to hear. The current social media comment sections
attack people with racism, homophobia, transphobia and general bigotry
that we truly believe have no place in today’s society.

What’s the best advice you’ve ever been given?
The best advice we have ever been given is to write and create music
for tomorrow, to be ourselves and write music we are proud of, instead of
writing for trends of today, or other people. When it comes to being
creative, the only opinion that should matter is your own.

What’s the nicest thing ever written about you?
We have had so many nice comments written about us following the
release of Pursuit of Happiness, as well as conversations with people after our gigs. We are so grateful for everyone who has supported our journey through this release and every positive comment feels like a blessing.

If you could open for any band / act / solo artist who would it be?
There are so many talented musicians in the industry today, but out of
everyone we would adore to support ‘Wolf Alice’. As one of our greatest
musical influences and another female led band, opening for them would
be a dream come true.

What other bands do we need to be checking out right now?
Garden Party, Manta

What was the last track you played on Spotify?
The last track I (Em) listened to on Spotify was ‘Good News’ by Mac
Miller. This song hits me right in the chest, not only with the heart
breaking lyrics but the production and creativity of the song itself.

If you could collaborate with any band / person / producer who would it be?
Despite genre differences, Frank Ocean would be an incredible
experience to collaborate with, his unique style and writing is
unmatched.

What has been the best gig you’ve ever played and why?
Due to Covid-19 our gig timetable has been scarce as of late, but on the
18th of October we played a mini set in Mr Wolf’s, a unique bar/club in
Bristol. The reaction we got from our set was overwhelming, and the
experience itself was one of the best we’ve had.

For us, we have been transferring our studio energy, and amplifying it to
become our stage presence. We have worked hard on building up our
confidence and performance energy to become our lively and inclusive
live music vibe.

What did you miss most about playing live in the pandemic?
The opportunity to perform at all! Having formed only two months before
the rise of covid, we have very much enjoyed finally being able to
perform our music to the world!

What’s it like to return to live gigs?
The gigs we have done have been some of the best experiences of our
lives, the feeling of being up on stage and performing our hearts out is
unmatched with any other.

What’s the scene like where you are from?
Being currently based in Manchester and Bristol due to us both still
working towards our degrees, the music scene around us is overflowing.
The amount of talent that has been discovered and developed in the two
years of music standstill due to Covid-19 has left venues backed up with
amazing artists and bands, all of which are completely worth going to
see and support.