Introducing Manchester’s Faux Pas and Their Debut EP I Feel Pretty, So Should You 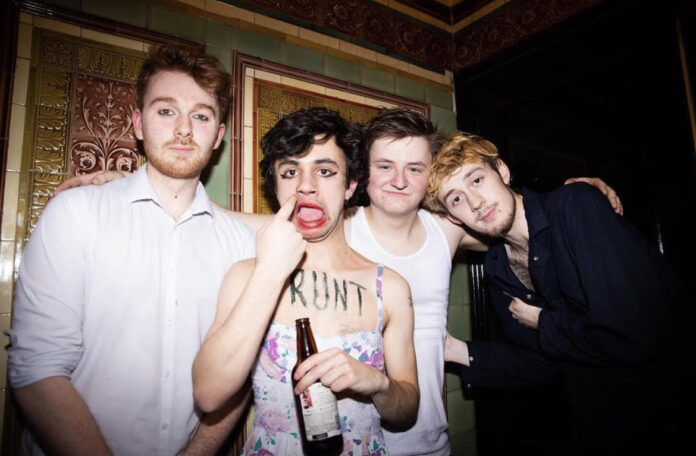 Faux Pas are ready to gate-crash the Manchester scene with a brand-new EP, I Feel Pretty, So Should You, an unbridled and cathartic release that provides a visceral exploration of intimate pain, whilst highlighting shared vulnerability as a tool against suicide.

To accompany the release, Faux Pas present an honest DIY music video, and a live session with Mickey Dale to showcase the EP’s conceptual nature. You can also experience the bands return with an intimate run of live dates to bring you closer than ever before; proof that a year and a half away from gigging has only heightened this band’s ability to conduct an engrossing and explosive performance.

Going into more detail about the EP, Ru explains ‘This record was created as a way of expressing the issues I tackled during a critical stage of my therapy, chronologically documenting the most painful moments of my life from childhood through to adulthood ranging from the loss of a father figure to prolonged bullying and drug abuse. The extended scope makes full use of the bands creative and instrumental potential, pushing them further than before to create a piece of work intended to help listeners find comfort in the trauma they have experienced.’

The band added ‘We felt the best way to immerse ourselves in the truth behind the process was to see each other at our most vulnerable. With this in mind, we discussed our individual experiences with the themes in each song, and took backing vocals on the track which resonated with us the most. This resulted in three very different approaches to singing that accompanied the tracks in a way that mirrored our own experiences with them. With the EP being one continuous piece of music, it provided a uniquely difficult experience that only added to our sense of accomplishment. It’s easily the hardest recording we’ve ever done, but equally it’s our best. There’s nothing quite like nailing a 26 minute take.’

With performances at Reading Festival, Leeds Festival, Kendal Calling, Humber Street Sesh, Live At Leeds and airplay from Radio 1’s Huw Stephens already under Faux Pas’ belt, ‘I Feel Pretty, So Should You’ offers a new insight into the band’s expansive songwriting abilities.

Over on our insta (faux_pas_official),  Spotify, Facebook, Twitter etc. We have some really cool merch coming up as well

Manchester Fuel on 8th Oct, Leeds Belgrave on 14th Oct, Hull Adelphi on 5th Nov, London Amersham on 18th Nov, plus a few more yet to be announced to keep an eye peeled x

As the final track on our upcoming EP, ‘I Feel Pretty, So Should You’, it represents a kind of 6 months later scenario. The idea for it first came about when I (Ru) found out my brother was going to be having a little girl. At the time I was told I was staying with my mother after a string of relapses and struggling to avoid suicidal thoughts. The knowledge that I was soon to have a niece prompted me to quit taking drugs permanently and to hold on, so I could be someone who hopefully one day they could have a beautiful relationship with. That’s the optimistic ending to the EP anyway, to hear how we get there you’ll have to listen to the full thing when it comes out on October 8th.

If you wanna get rid of fruit flies just put some apple cider vinegar and washing up liquid in a glass, clingfilm over the top, punch a few tiny holes in and voila, fruit fly harvest

It was a podcast actually! Off Menu with James Acaster and Ed Gamble with guest Bob Mortimer (who is one of the funniest men on the planet). Would recommend if you fancy a giggle

Working with Neil Young would be a lot of fun