A four-piece hailing from Manchester, they’re a band that eschew the image-is-everything mentality harboured by many of their Mancunian contemporaries and instead let their music speak for itself.

A combination of indie rock swagger and stadium-ready anthemia, coupled with a quiet nuance that belies the band’s dynamic nature, they’ve honed their sound and cut their teeth on festival stages and venues up and down the country, garnering an army of fans and a slew of well-received singles in the process.

The latest addition to their repertoire is ‘Turn It Up’. Three minutes of bold, brash indie rock, it seeks to encapsulate the sweat-soaked energy once seen in so many venues nationwide.

Northern Revive:  Introduce yourself in less than 10 words please chaps!

G: We’re Freedom of the city, We’re a rock band.

C: George Always comes in with a banger first!
G: But we arrange as band, jam on it and thrash it out. All the production is done as a band as much
as possible. It’s all done DIY &amp; between us, down to the release of it.

G: We pride ourselves on our live shows and creating a sound that fills whatever venue we play at. So duplicating that vibe to our records is what we strive to achieve. We have a studio which we’ve set up so we can play on stuff for hours until it’s right, and then really spend time getting that production right to create that energy. Where possible we do as much of it as band as possible to make sure we’re driving that energy into it all the time.

S: The website joinmyband basically. I was playing in a band, Stockport based. We were looking for a guitarist. George originally showed an interest in that band. But I ended up leaving that band 2 weeks later, and emailing George to see if he was still looking to start something off. Paul came on board shortly after that and we got going, a couple of years (and a couple of bassists later), we ended up hooking up with Chris through friends of G’s wife, and yeah, here we are.

NR:  What would be on your rider?

C: Don’t get in to playing Rock ‘N’ Roll. Ha ha. Errr…. I’d say the best would probably be, to just stick true to you, you know. Don’t go trying to be something and play something that you’re not. You do you! 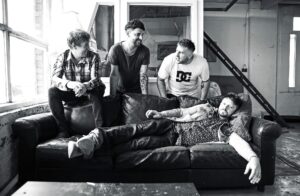 C: I Always used to love watching the old playbacks of some of those massive 70’s rock gigs on sky arts back in the day. Like Live in Japan, or Knebworth (Zep), so maybe one of those shows. Punk has always been a big part of my musical tastes so maybe opening for someone like The Damned at CBGB’s or something… Actually, The Wildhearts, I’d fucking love to open up for The Wildhearts at the Ritz!

NR: How are you coping with lockdown and what’s in store for you when all this is over?

P: Ok I suppose, but it is difficult to not be able to go and do what you sort of want to do which is probably the worst part about it, but obviously there’s plenty of people worse off than us. We’re just keen to get back to gigging as quickly as possible really, with a new set, new songs. Just get back out there again. As quickly as we can really!

P: All the usual places, Facebook, Soundcloud, Instagram, Twitter, our website etc…
www.facebook.com/freedomofthecity
www.instagram.com/freedomofthecity
www.twitter.com/fotcofficial
www.fotc.band
You can message us direct for our merch, we’ve got Tees, bands, etc. for all you lovely people! Tees are a tenner, black, white or pink with the band logo in white. If you been to the gigs, you’ve seen them! Give us a shout, we’d love to hear form you!