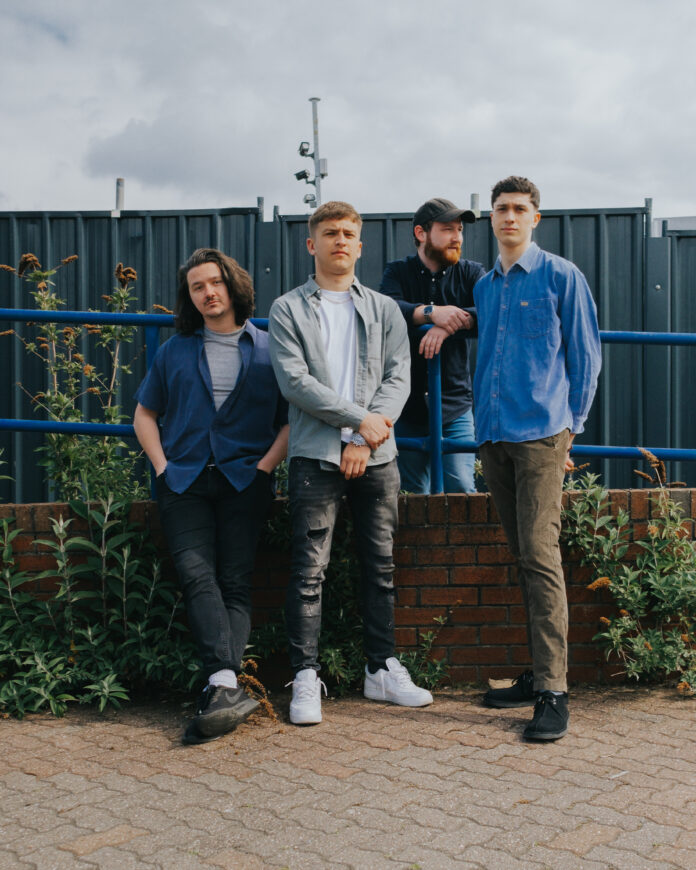 Northern towns aren’t renowned for their progressive politics. Whether you take Rochdale or Redcar, Bradford or Blackpool, these provincial towns share a milieu that succeeds in fostering a certain mindset not often seen in cities. This is something that Manchester’s MCRAE understand perfectly.

Hailing from the mill towns scattered across both Lancashire and Yorkshire, the four-piece eschew the swaggering indie-boy Oasis imitations so often seen in such towns, in favour of something slightly subtler, more intelligent, that bridges the gap between punk, indie and pop effortlessly.

Indeed, their latest single ‘Lucy’ is arguably their poppiest release to date. Three minutes of shimmering guitars and chunky bass, the band describe the track as being “the age-old tale of boy meets mythical creature in a bar whilst tripping”, and thought harbouring plenty of frontman Jake Mcrae’s trademark snotty vocals, the sugary aesthetic the band employ here is a far cry from their punk-inspired early days, while still retaining the edge of piss and vinegar that made MCRAE such an enticing prospect to begin with.

We caught up with MCRAE following the track’s release:

It usually alternates between Jake having chords and lyrics and bringing it to the band or Aidan having the bones of a song and putting it into demos which we’ll collectively work on then I’ll bring lyrics to, especially in lockdown.

We’re told we’re quite high energy on stage and we try to apply that in the studio by keeping everything consistent to what we can recreate live!

Joe and I are cousins so we’ve obviously known each other forever and jammed from an early age – Aidan and I met via a mutual friend in high school and we’ve been in and out of bands together since we were 13! We met Jordan at college and when Joe was able to joined the three of us and became the band we are now.

We played The Castle Hotel in Manchester 2018 on the World Cup quarter finals when we beat Sweden’s 2-1, it was packed, sweltering there were flares in the street! It just all felt right that day! We wanted our first headline gig after lockdown to be back there and it’s sold out on July the 3rd.

How to beat the lie detector – Kele

I think the main one is probably the way streaming works.

As a band we were once told “It’s nobody’s fault it’s just the way the world is today” I’m not sure it’s exactly advice but it’s stuck with us!

Such a hard one but we’d have to say The Strokes.

The A.V Club who are supporting us at our gig at the castle

We’re proper working on Merch follow us on Insta @mcraeoffical to keep up with us and get at us on Spotify – we’ll send you guys some tee’s soon as we’ve got them!