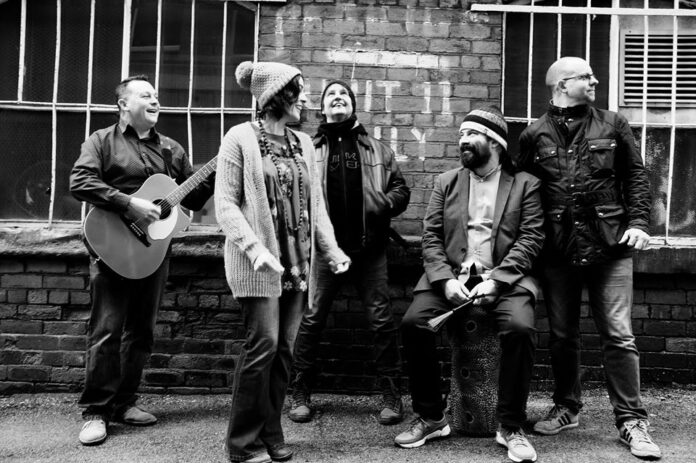 Fishing4Compliments is an original, melodic Huddersfield-based five piece band that offer a unique indie/folk/pop sound with songs that come straight from the heart.

Performances are full of light and shade and songs have been described by audience members as; ‘enigmatic,’ ‘intriguing,’ ‘sunny,’ ‘happy’ and ‘making you feel like dancing in the moonlight.’

I (Eileen) had written a lot of songs before the band was formed and it was created to develop and bring those songs to life. I have written new ones along the way and introduced any that I feel might be strong enough to be considered by the band. I never sit down to write a song intentionally they just sort of arrive (or a basic idea does that I then do sit down to develop that) but they kind of arrive in reaction to stuff that happens in my life/strong emotions that I may be feeling at certain times. Also on a couple of occasions Jim or Steve have has suggested I write another verse or section into the song so that has kept me awake after band practice a few times. Ashley, Jim and Steve may also make suggestions about chords to be added or changed once we start working creatively on my songs. I bring something pretty simple to them and they bring it to life, that’s how I think of it.

I think that just happened because we were all excited about recording our songs and we found Joseph and David Dunwell of the Leeds band The Dunwells (who produced our album) such great people to work with and they were full of energy and enthusiasm and inspiration. Also as a band we are all good friends now and we just always have a lot of fun and we are all energised by working on our music and by anything that’s music related really.

That’s a tricky one. I think I get a little tune with a few words going on in my head with it and they might stay or they may go and then they will have just acted as like a melody making device. I don’t think I have ever written lyrics before a tune, it just doesn’t seem to work that way for me. I have on occasions started from the point of knowing what I want a song to be called and that was the case with ‘Drunken Tree’ and ‘Wild bird.’ With ‘Love You Left’ most of the lyrics arrived in my head alongside the tune which I then taped on my phone until I got home to work out the chords which actually turned out to be pretty simple ones.

It is a little complicated but it all started with myself (Eileen) and Ashley meeting then Ashley started a 60s covers band and members of that band included Steve and Jim who got involved with Fishing4Compliments more as a favour really with Jim standing in as our drummer on a few tracks and then later for a few gigs and Steve adding bass lines on some of our demo recordings. One night at a gig Jim suggested that he would really like to try playing lead guitar instead and from there it all started to fall into place with our Fishing sound. With Steve we had been trying to coax him in to the band for a long time as we knew he had just the right vibe and sound for us and following the one gig that he depped as our bass player he joined the band as an official member, which was remarkable because there was only about 3 people in the audience that night! David answered a Gumtree add when our original drummer and good friend Ben decided to move on to pastures new. When David arrived at our house (Ashley and Eileen) to audition he realised he had been there before because he had once turned up for an audition and joined that same 60s band for a short while. David turned up with a whole host of percussive instruments and we knew immediately we wanted him in the band. 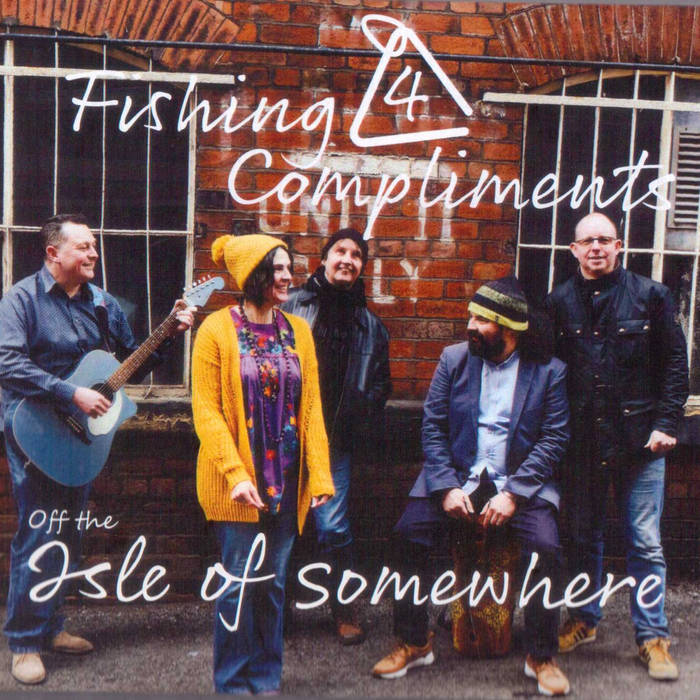 That’s a tough question as we have had lots of gigs that we have loved over the years and we don’t really want to pick out a particular venue or event as so many unique atmospheres and audiences have created many wonderful memories for us since we first set out with our songs. One of our last gigs before the lockdown was a very happy gig where we got the sense that the audience where really loving the evening and were there with us every second of the way; singing along, drumming on the tables, looking really happy and generally being amazingly supportive and that was just a really magical feeling. We are grateful to have had quite a few magical feeling gigs along the way and no matter where we have played or the number of people in attendance it has always been the audience that have made the best gigs and it’s always a great feeling when we get lucky enough to capture hearts with our music.

Well for me (Eileen) the main thing is I like to have water on stage, it gives me a sense of security somehow. I really also love it when I get to gig somewhere where I can get a cup of tea and our David likes his tea too. Chai tea comes to mind for David and chamomile or peppermint tea for me for singing but really any tea would do. Guessing Jim would like a pint of Cider and he’d always be up for any pizza on offer. Steve is a malt whiskey and chocolate fan so either or both of them would sure make him smile but he would be happy with a pint of beer either. Ashley and David would always be very happy if there were any pork pies on offer. Oh yes and for me an emergency dress malfunction kit would be reassuring because last summer we played an outdoor gig on a windy evening in a flary dress and if someone in the audience hadn’t happened to have and offer me a metal binder clip to tie back part of my dress I really don’t know if I could have carried on with the gig and also another time I had a dress split up one side (Jim’s Mum had to help me do an emergency repair job with duck tape).

I think this would likely be different for each member of the band as we have quite a diverse and eclectic mix of musical influences but as we all had the best time recording our debut album with The Dunwells and all admire them greatly I know we would all be over the moon to open for them at a show, that would be amazing and in our ideal dream land they would arrive on stage and sing the backing vocals they contributed toward on our album too. It’s also a dream of mine (Eileen) for the band to open for John Bramwell-a girl can dream heh. First Aid Kit also feature in our fantasy wish list of bands to support and if Stornaway had not decided to call it a day it would have been quite something to open for them.

I am going to answer this as one as an individual as I can’t really speak for the band but I felt really lost at the start as our little merry Fishing crew and live music generally had just become such a huge part of my life. Song writing as throughout much of my life soon became my faithful companion and as I started to post a couple of videos on social media of the results it was a nice feeling that people seemed to relate to the songs and that helped to keep me going. I’ve made a few new friends through posting new lockdown inspired songs too so that has been really nice and helped me along the way for sure. One of the new friends I made along the social media way started encouraging me to network with radio stations and that’s also really kept me going too as I am now a regular listener to some lovely internet/community-based radio stations and it’s also been great to know our songs are still getting out there into the world when we can’t bring them out to people, so that’s helped too as well as discovering lots of new music. More generally walking and meeting with a friend when it’s been possible has really helped me through it all. During the summer last year we were also lucky enough to get to do some outdoor gigs as a trio version of the band which really helped with keeping my spirits up. I did worry the whole band might just fall apart but from the outset they have all been really reassuring about that so that has helped massively regarding hope for the future.

You can also stream, download or purchase our 11 track album in CD format (Supplied in eco- friendly card digi-pack with gate-fold case and 11 page photo/lyrics booklet) at: https://fishing4compliments.bandcamp.com/album/off-the-isle-of-somewhere

The album is also available across all the main streaming platforms.