Introducing Proletariat and Their New Single I’m Not Alright 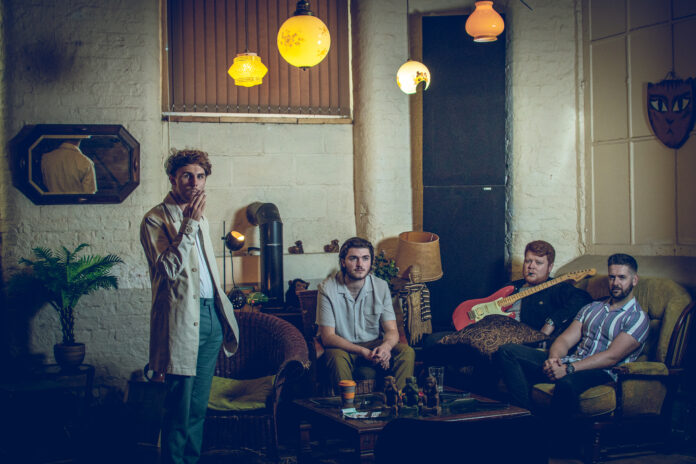 Manchester’s indie-rockers Proletariat have announced their new single, ‘I’m Not Alright’, which will be released during Mental Health Awareness Week 2021.

Recorded at Eve Studios in Greater Manchester, the track will be out across all major platforms on Friday, May 14th; just two weeks after the outfit released their scorching cover of the Rolling Stones’ ‘Sympathy for the Devil’.

Ladled with tranquil-fused melodies throughout, ‘I’m Not Alright’ touches on one’s inner battle with mental illness, capturing the energy those suffering experience as a result, and aims to provide the message that it’s okay, and important, to talk – before exploding into a blistering, frantic outro that perfectly represents the relentless persistence and intensity of the many illnesses people battle with all across the world.

Commenting on the track, frontman James Cummins states “this song really means a lot to me, personally it’s one of the most rewarding tracks we’ve worked on to date. Like so many others out there in the world, I have my own inner battles with mental illness, and writing the track helped me climb out of a really tough period a few years back. It feels really fitting and suitable to be releasing it during Mental Health Awareness Week.”

“Because the song has such an important and personal message behind it, we’ve spent a lot of time honing and crafting it into what it is today. Thankfully we feel as though we’ve really managed to capture the true emotion behind it and the feelings we wanted it to represent.”

‘I’m Not Alright’ sees Proletariat accomplish the mission they set out in December 2020 to release six singles in as many months, following their return from a two-year hiatus, and comes on the back of a headline show announcement at Manchester’s Deaf Institute (Saturday, September 18th), which saw tickets sell-out in less than three days.

Hey guys, thanks for taking the time to answer our questions. Can you introduce the band?

Hey guys! We’re Proletariat, and we originally formed in Mossley, Greater Manchester back in 2016; following a two-year hiatus from December 2018 to December 2020, we’ve returned with an arsenal of new tunes, a semi-new lineup, and a hunger to go further than ever before. Proletariat now consists of myself (James Cummins) on vocals and guitar, Connor Dolan on lead guitar, Evan Armstrong on bass, and Rob Burton on drums.

You’ve just released your latest single ‘I’m Not Alright’. Can you tell us a bit about that?

‘I’m Not Alright’ is definitely one of the most honest, insightful and personal songs we’ve written so far on our journey. It was written during a time I was struggling with my own battle with mental illness, and provided me with an opportunity to share my thoughts and get things off my chest – it was the song I needed to write at that moment in time, even though I probably didn’t want to admit it. The whole message and mission behind the song is to highlight the fact it’s extremely important to talk about these things, while also attempting to reassure people that they’re not alone. I’m really proud of the song we’ve created, and the whole meaning behind it – we’ve got a platform to really connect with people, and I hope this song offers listeners something they need; whether that’s comfort, reassurance or something to relate to.

How important do you think it is to raise awareness of mental health in this day and age?

I think the efforts and discourse over recent years have been taking remarkable strides in the right direction, however – with topics of this nature – i think it’s always important to keep that support and those discussions moving forwards each and every day. Mental illness will never go away, so it’s down to us to ensure the support networks and the greater understanding are as strong and open as ever. There’s been so much work put into eradicating the stigma surrounding mental illness recently, and it’s great to see – it’s just important we keep the ball rolling, we’ve all got a part to play; in the main part simply being accepting and understanding about it.

Do you think there’s enough mental health support in the music industry either for bands or professionals more generally?

There’s no denying the fact that musicians and those in the industry are faced with the potential exposure to an abundance of mental illness triggers, it’s the nature of the world we live in. From stress about money and general self-doubt, to the temptations and subsequent effects of drugs and alcohol abuse, and the physical and mental effects of touring, there’s so many aspects to our industry which can take their toll on those within it – and, like i mentioned above, although there is a great deal of work being done and support in place, there’s always more we can do. I think the music industry is certainly taking steps in the right direction, with organisations such as Music Minds Matter and Help For Musicians playing a great role; they’re doing such an amazing job and they deserve a great deal of praise for the work they’re doing.

You sold out your recently announced Deaf Institute gig in a matter of days. How did that feel after live shows have been so up in the air lately?

There’s no two ways about it, it felt bloody incredible. Not only have live shows been halted due to COVID, this was the first headline show we’d announced in over two and a half years, and for the whole thing to sell out in less than three days was unbelievable; we didn’t expect that at all. It’s always scary coming back from a big break like we did, you never know what the reaction’s going to be like – but we were absolutely blown away by everyone’s support, it really does mean the world and we can’t wait to see everyone in that room in September; it’s going to be a great night.

Have you got anything planned for after that one?

Although the impact of COVID certainly wasn’t ideal, we managed to turn it into a positive for ourselves as a band. With no gigs, festivals, tours etc, we had plenty of time on our hands, and we turned that into a positive, so we put a clear plan in place of what we want to achieve and where we want to be heading. We have plenty of great things planned for after the Deaf Institute show, and we’re looking two/three steps ahead this time round, rather than waiting for opportunities to come to us. I can’t say anything in form of an official announcement of any sort, but I can say we’re already reaching levels we didn’t achieve first time round, and to keep an eye on our socials over the next week or so; we may have another show or two announced sooner rather than later!

How do you see the music scene, and live shows more specifically, feeling as things progress? Do you think we’re likely to get things back to how they were pre-pandemic?

Personally I think the live scene is going to thrive once everyone gets the green light, it’s clear to see that everyone can’t wait to get back in venues watching their favourite bands and artists again. I think the pandemic has really established a strong connection between gig-goers and their local, independent venues, and I really hope that continues indefinitely once all this is over. We need each other… venues, artists and fans, that’s what it’s all about – and, as well as playing shows, I can’t wait to go and check out some bands and see everyone again.

Are there any bands you think we should be checking out currently?

There’s so many great bands out there at the minute, as there always has been – and that spans across numerous levels too. My recommendations right now would be Yard Act, Plague Vendor, Viagra Boys, Strange Bones, Document, IST IST and Cucamaras.

Finally, what else has the year got in store for the band?

Without giving too much away, the rest of the year will involve even more new music, some great shows (including places we’ve never played before) and a lot of hard work.