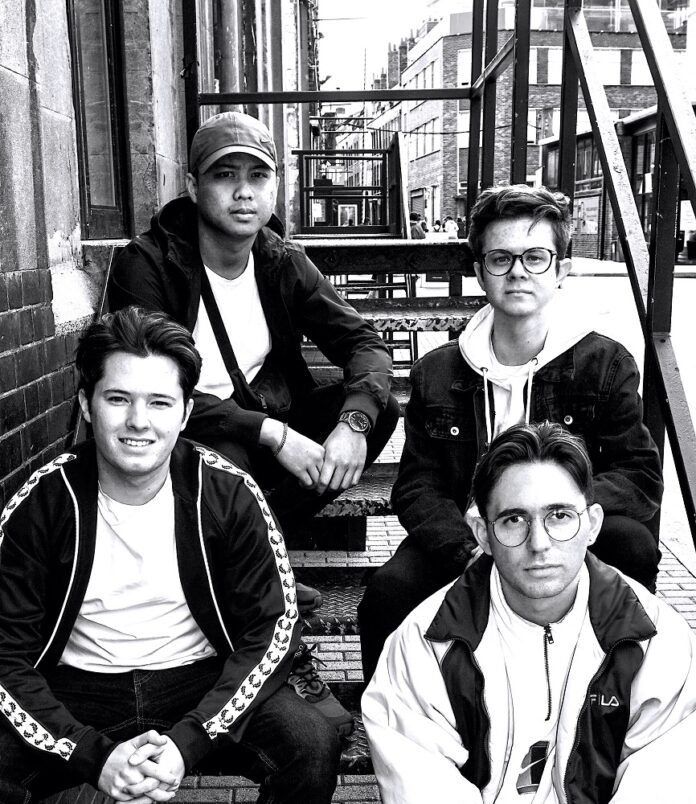 While most bands seem to take a while to really break into their stride, London four-piece RAMES emerged from their borough seemingly fully formed. Two early demos earned the attention and support of both BBC Introducing and Indie Central Management who quickly went on to sign the band.

Notable support slots and shows for the likes of SUCKER and Scruff of the Neck soon followed, as did a smattering of equally well-received singles, with their official debut single ‘Easy For You’ being credited as The Sunday Mirror’s Single of the Week. Their second and third singles ‘She’s Gold’ and ‘Won’t Be Long’ further showcased the band’s youthful and jangly sound while receiving further BBC airtime and plays on Amazing Radio as well as major Spotify playlist features.

Indeed, the band’s latest single ‘Eleanor Street’ looks to follow in much the same way. Three minutes of bright and breezy indie-pop, hinged on airy guitars, ‘Eleanor Street’ is the perfect accompaniment to those first tentative touches of spring we’re feeling.

Described by the band simply as being “about having a laugh with your mates and having a good time”, it’s timing couldn’t be better. As the UK seemingly begins to head towards a degree of normality, and pubs begin to open back again, you could do much worse than sticking on ‘Eleanor Street’ and having a few pints with mates in a beer garden.

I’m pretty sure all of us wanted to be in a band from a young age. It’s always been the dream to be in a band and touring and playing stadiums and that’s how the love for music started. There’s honestly nothing better than making music with your mates and it’s what we love doing at the end of the day and we just want to share our music to as many people as possible.

I’d say there’s no set way of writing songs for us because it’s a really creative process. Alan (lead singer) and Oli (lead guitarist) have been writing songs together since Year 8 at school – so we would have been around 12 years old. Some of the songs were absolutely dreadful. But as you can imagine, now 10 years later, there’s a great song writing connection between us and I’d like to say that we’ve improved since then! So we usually write songs in their most basic form and then show the band at rehearsals who then help make the song what it is. But the other band members Joe Bedford (Bass) and Joe Jarvis (Drums) also bring ideas to the table and we just go from there. As mentioned it’s a creative process and we’re always on the lookout for song inspiration and ideas.

A lot of it comes down to feeling the energy of the song and making sure that’s captured in the recording. The team that we record with at Magic Garden Studios in Wolverhampton are amazing at making sure that live sound and energy is present in the track.

We tend to write the music first, that’s where the initial ideas come from and we all add our different ideas in the rehearsal room or studio and it all comes together. Alan then usually writes the lyrics based on the mood or feel of the song or goes to the trusty notes page of his phone filled with a lot of lyric ideas all over the place.

Alan  and Oli met at school and have been playing music together since around 12 years old and were in a band prior to RAMES. We started RAMES in 2019 and when looking for a bass player we actually asked a good mate of ours Bedford, who joined our school in sixth form, if he wanted to play bass for us after Oli showed Alan a video of him playing guitar. Our drummer Jarv joined the band during lockdown so after a load of zoom calls we finally met up for some drinks last summer when things opened up.


We’ve played a load of great shows at some really great venues. I reckon one of our favourite gigs that we’ve played so far is probably our first ever show as RAMES at The Horn in St Albans back in May 2019. Just having all our efforts in preparing for the night come together for the first time was amazing to experience. It was a packed out show and the crowd were incredible. I think we can all agree that it was a really special night. But our headline show last February just before lockdown was another special night. There was a three figure crowd that night and we surprised the crowd with a Whitney Houston cover.

We’re quite basic in terms of our rider. We all just love beer and aren’t too fussy so give us a crate (/crates..) of beer and we’re sweet – any beer at all (except Coors light, no thanks).

It’s been highlighted over recent years and especially over the last year or so, but the lack of support and funding for smaller artists, grassroot venues and independent record stores etc. The creative industry and arts is such an important part of people’s lives, we would love to see more opportunities and support to encourage people to keep creating and sharing.

There are no defeats – just victories and lessons

Jarv: Catfish and the Bottlemen. Speaks for itself really.

Bedford: The Libertines – my favourite band and an after party with Pete Doherty would be wild – actually that may be a bit too wild..

We’ve got new songs that we’ve written that we plan on recording and releasing later this year. We’ve also got a few gigs lined up already for the year so fingers crossed they are allowed to go ahead! We just can’t wait to get back to gigging and going to and playing shows. There’s nothing better.

We’re @RAMESband on all social media inc Instagram and TikTok and our website and merch can be found here: https://www.musicglue.com/rames/

Our new single ‘Eleanor Street’ came about when we were messing about with a few ideas at a rehearsal last year. We loved the infectious and poppy guitar riff that Oli came up with. The song is mainly about when you have a messy night out and you’re in a proper ‘dream like’ state and coming up with stupid drunken ideas, and someone else like your girlfriend or one of your mates ends up having to look after you and they have to be your ‘voice of reason’. For the video we wanted to play on this idea and the opening scene is all of us looking a total mess and the video then plays in reverse, so the viewer see’s why we’re in such a state. It’s got a summer pop sound to it and we can’t wait to be gigging again because it’s such a fun song to play live and there’s a great energy to it.