Introducing The France and Their New Single Forever Too Long 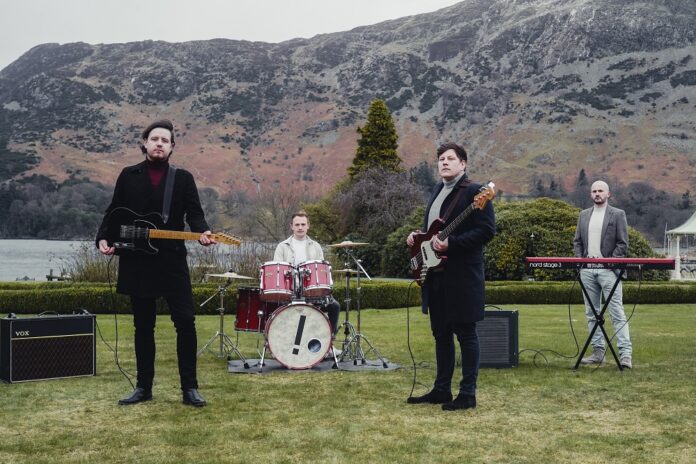 Though Manchester might well be known as the UK’s rainy city, indie-pop four-piece The France are looking to inject some sunshine into the city’s streets regardless of the time of year. Eschewing the cocksure arrogance of bands such as The Courteeners or Oasis that so many Manchester bands try to emulate, The France harbour a sense of irresistible upbeat optimism that’s difficult to ignore.

It’s this combination of relatable indie and danceable pop that make the prospect of The France so irresistible, and never has been more prominent than on their latest single ‘Forever Too Long’. Recorded at Parr Street Studios with Chris Taylor (Elbow, Blossoms, Stereophonics), it’s three minutes of button-bright indie-pop, it’s the perfect antithesis to a cold Winter, while effortlessly bringing to mind recent breakthrough bands such as Marsicans or Cassia. Written across the UK’s first lockdown back in Spring 2020, the fittingly titled ‘Forever Too Long’ is a heart-on-the-sleeve love song born from the frustrations of being without those we care about.

Described by the band as “a song that can resonate with anyone. It’s not often as an artist you write a song from your own experience but also be writing for millions of other people who just want to say the same thing at the same time. This song has got the potential to strike a chord”. With these feelings felt almost universally over the course of 2020, ‘Forever Too Long’ is a track sure to resonate both with established fans of the band, and those for whom it will be their first taste of The France.

We caught up with the band following on from the track’s release:

Hey guys, thanks for taking the time to answer our questions. How’s it going? Good thank you & thanks for having us

Can you introduce yourself in less than 10 words?

We’re your new guilty pleasure – we’re The France from Manchester.

How did you get together and start making music?
Through mutual friends. Joel & Joe met through a gig in a pub when Joel’s drummer at the time, Ben Ryan Davies, decided to pursue an acting career. Liam had been performing solo. Eventually after a few support slots, it made sense for Liam to join bringing not only just extra instrumentation but his songwriting too. Rick joined whilst in Uni in Norwich and took an instant 2 year sabbatical.
You’ve just released your new single ‘Forever Too Long’. What’s the reception been like so far?
It’s been great. We’ve had the usual plays from our local fans but Sheffield has really taken to this tune so we hope to be singing it aloud at a future gig.
Can you tell us a bit more about the track?
It was written during lockdown with the ongoing restrictions of being away from loved ones. Liam had started a relatively new relationship so it was pretty shit for him. It was a song that was so easy to write because it was so easy to express how millions of people were feeling.
It was written and recorded over the UK’s first lockdown last year, but how else did you guys get through things?  Any hobbies or skills you want to tell us about?
We just continued to write and catch up with each other over zooms. It gave us time to focus on us as a band a bit more. Hobbies were tricky to keep going like golf etc but Liam & Joel are partial to a bit of call of duty.
The video was filmed in a hotel in the Lake District. How did that come about?
Joel used to work in the lakes and had a good relationship with the owner/manager. We changed venue so often it was ridiculous. It was freezing. The hotel was empty so we had every space possible. It was a top day but Liam actually got windburn by the end of the day it was that cold & windy. Next time, we’re getting actors!
The France is pretty unusual as far as band names go. What’s the story behind that?
It’s an acronym we stumbled upon. From Rochdale And Never Can Escape
With live shows now seemingly on the horizon again, are there any plans in place for gigs or tours?
We hope so. We’ve been focusing on getting new music out and a solid live set together. We’re ready for any gig coming our way so we hope to be heading to a few different cities.
Are there any other bands you think we should be checking out currently?
The Covasettes write some tunes!
Finally, what can we expect from you guys throughout the rest of 2021?
We’re going to be releasing more singles. We’ve recently just recorded another 2 at Parr Street and their just as good if not better. We really want to play some gigs this year & hopefully a couple of festivals. Expect us to keep coming at you!
Facebook
Twitter
Pinterest
WhatsApp
Linkedin
ReddIt
Email
Print
Telegram
Previous articleIntroducing Paul Fletcher & The Dukes and New Single
Next articleMarsela drops new inspiring track ‘Dark days’