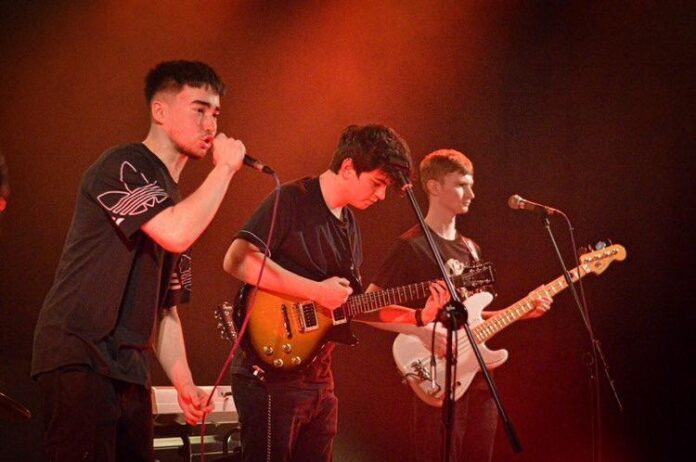 At a time when indie bands are everywhere, and with most trying their hardest to emulate the likes of Liam Gallagher or The 1975, it’s refreshing when one comes along that seems keen to break from that mould. Especially when it’s a brand new band fresh out the starting blocks.

With a refusal to adhere to genre stereotypes, the quartet take their cues from a wealth indie bands through the ages, resulting in their own inherently timeless brand that harbours echoes of bands such as Kasabian, The Courteeners, or even at times, The Las.

With previous singles already earning praise from the likes of RGM, Snake Oil Music and Northern Revive, latest offering ‘Masquerade’ looks set to do much the same. Eschewing the band’s heavier side in favour of picked guitars and vocal harmonies, it’s arguably the band’s most melodic single to date, and one which feels like The Roster taking a tentative step up the ladder.

“Masquerade is a very special tune to us because it was the first song we created whilst in lockdown” the band explain. “We had to adapt to making tunes separately. For example, Tom created the instrumental for it and then sent it to Joe who then came up with the lyrics for it and then the tune was finalised by Louie who created the piano parts for the tune.”

It’s not just a new way of writing and recording to which The Roster have been forced to adapt. Having only formed in 2019, much of the band’s career thus far has been spent under lockdown. And while some crucial early shows gave them a taste of performing, Covid soon put a stop to that. Now armed with new material and buckets of energy, it’s only a matter of time before they’re back on stage.

We caught up with the band following Masquerade’s release:

Instantly Differing from the bog-standard indie being churned out?

We all got into music at different times in our life, from our parent’s having mid life crisis’ and buying instruments to generations of musicians in families passing down their passion for music. Plus, some of us are useless at everything else.

So, the first step when we’re writing a new tune is creating a chord progression and melody. Then we add bass and drums accordingly along with the accompanying guitar. After this, Joe writes the lyrics and we fine tune any extra bits that we think would add to the song. On some occasions though, Joe composes songs on acoustic with lyrics which we then transform into a band tune


How did you all meet?

We all went to school together, but we didn’t start the band until we were all in sixth form. We’re lucky that we all come from the same friends group.

Probably would have to be when we played The Venue in Derby, one of the best crowds we’ve ever had, and after such a short time being together we could have never imagined playing to a crowd like that.

We’d definitely love to collaborate with Loyle Carner. We love his music and reckon his sound could easily complement our music.

With gig’s out the window, bands are having to find new ways to entertain their fans and stay active on social media, which has given birth to a new way of performing live music.

Derby is a scene that struggles for venues and opportunities. Bands from our area have to look for gigs in Nottingham, Birmingham, Sheffield and other areas which have more active scenes.

You can find our music on any major streaming platforms like, Spotify, Apple Music, SoundCloud etc and keep informed via our social media.

‘Masquerade’ is our latest single differing from our usual style, more stripped back and chilled out.  Favouring picked guitars and vocal harmonies, it’s arguably our most melodic single to date, being picked up by BBC introducing to be played on our local radio.