Introducing The Zealot Journal and Their New Single God In Heartbreak 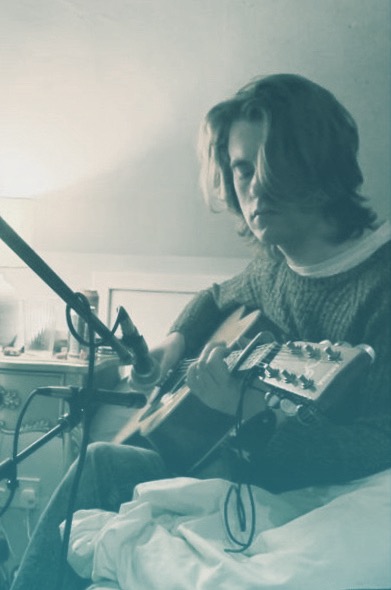 Though the concept of the word brainchild might not be a difficult one to grasp, there’s a sense that when used in a musical context, it overlooks the idea of music being both instinctual and emotional. For that reason, it’s impossible to describe The Zealot Journal as the brainchild of Edinburgh’s Sandy Lance, indeed, it feels so much more than that.

Inspired as much by the gothic post-punk sounds of bands such as Bauhaus and The Cure as ‘90s behemoths such as Nirvana and The Smashing Pumpkins, The Zealot Journal harbour a distinctly nostalgic bent, which, when combined with the influence of neoclassical and traditional folk music, make for an aesthetic that’s both idiosyncratic, and completely beguiling.

“Because I’ve always been a pretentious wanker, my songs are often to do with theological, religious and mystical themes.” Lance explains. “There’s something primordial about music that I want to tap into.”

“‘God in Heartbreak’ is to do with grappling with the idea of the ‘personal’ God of Christianity, while having a feeling that God is beyond heartbreak and the pains of love. The gods of Paganism weren’t personal in the sense that the incarnate Christ is, but they were personal in the sense that they felt the jealousy, grief and pain of longing and heartbreak. So really it’s grappling with that.”

Four minutes of quietly understated Scottish folk, it’s a track that gently unfurls as it progresses towards a climactic conclusion. And though understated it may be, its resonance and melcholic beauty ensure its also a track that stays with you long after its closing notes.

“My ethos is the wish to carve beauty and passion – with a longing for the transcendent – into the chaos and nihilism of modernity” Lance further exaplins “and often I’m reminded of the quote by Marinetti that “Poetry must be a violent assault against the unknown forces in order to overcome them and prostrate them before men.”

What made you want to get into music?
Music has been a massive part of my life for as long as I can
remember. Both of my parents have had a massive impact on my
taste in music, and so it’s almost felt inevitable that this would be
what I’d want to do.

What’s the writing process?
At the moment, lockdown and the limitations of that, has pushed me
towards writing the foundations for everything on an acoustic guitar.
After I have the base of the song written, I can add everything else
on top of it. I view that in a positive way as it keeps everything pretty
grounded, however I’m excited to try completely different processes
when things allow.

What come first lyrics or music?
I don’t think there has to be a dialectic between them. I think songs
convey emotion and can express an idea, and both lyrics and
music can play complimentary parts in that.

What was the last track you played on Spotify?
Dead Can Dance – Mesmerism
If I could achieve anything in music, it’d be writing anything close to
how beautiful their songs are.

What would be on your rider?
Irn Bru, and lots of incense.

If you could open for any band / act / solo artist who would it
be?
I’d love to open for The Cure, but at the same time I’d feel just as
frustrated as the audience at having to get through my performance
before being able to see them.

How are you coping with lockdown?
Working on music is the main thing keeping me going through this.
Apart from that, quite a lot of reading and movies.

How is lock down effecting the music scene?
There’s the obvious restrictions it’s having on it in terms of
performances and recordings, but I do think it’s making more
people focus on their creative side, and I know many talented artists
focusing more on making great content as an outlet.
What’s the scene like where you are from?
There isn’t really a very clear ‘scene’, it’s no secret that government
and council action has been terrible for the local alternative scene
long before lockdown. However, the variety and ability within what
is here, is extremely rich and deserving of much more exposure.