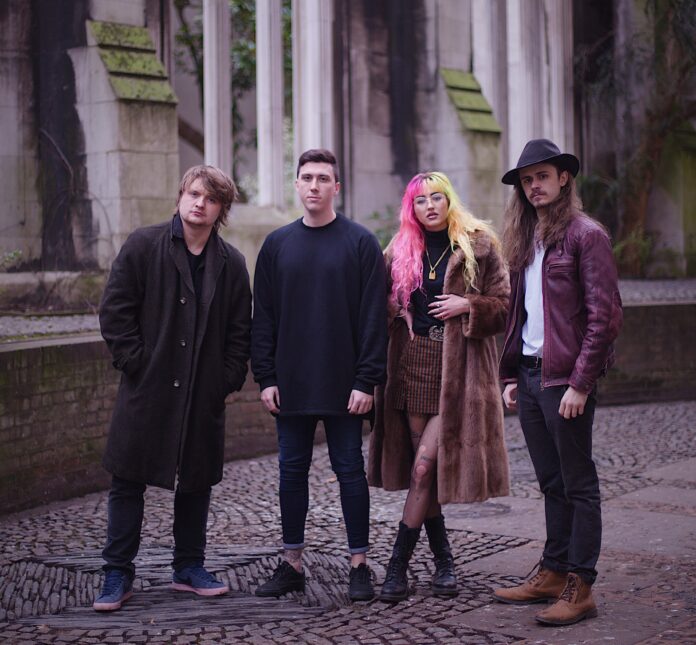 Formed around the steadfast duality of Hetti Harper inimitable vocal delivery and Adam Davies’ driving guitar, Tiffany Twisted are a London-based four-piece that have been turning heads since they exploded on to London’s live scene back in 2019.

It’s not just on stage where the band have been making a name for themselves, however. Last year’s debut EP, This is the End, also succeeded in doing so. Recorded at Abbey Road Studios’ Studio 3, it channelled the nostalgic sounds of the rock music the band were raised on.

Now embarking on writing their debut album, which combines a love of heavy rock, post-hardcore and hip-hop with themes that cover the mystical, philosophical, and spiritual, it won’t be long before fans get their first taste of new material.

Until then however, for those who just can’t wait that long, Tiffany Twisted are rereleasing that debut EP in Dolby’s new 3D sound technology on March 27th 2021, with ‘Save My Soul’ the EP’s lead single.

Described by the band as being “a story of loss and heartbreak but also of rebirth, of being in a constant state of change and finding purpose in the strangest, and sometimes darkest, of places”, it’s a soaring statement of a single that’s as cathartic as it is uplifting, providing listeners with a sense of optimism at a time when most of us could really use it.

We caught up with band ahead of the track’s release:

Hey guys, thanks for taking the time to answer our questions. Let’s jump straight in! What’s the writing process?

Hetti: Tiffany Twisted songs always start with Adam and I sitting together, experimenting with new riffs and melodies until something really sticks. The lyrics then follow but I have to be alone for this, always. Adam will record a riff as a voice note and send them over to me. Sometimes I’m instantly inspired to write and sometimes I’ll revisit them months later and at that point something will just click. The EP was really about finding myself in this constant state of change mixed in with heartbreak, and actually finding purpose in some really dark and strange places. As I’ve focused more inwardly, the newer stuff we’re writing now has taken a much more spiritual turn.

We had just played a gig at Sanctum Hotel, Soho and we got chatting to Airborne’s drummer, Ryan O’Keeffe. We were telling him how much we wanted to play in the states and his simple advice was “don’t trust Americans.”

Where can we find more?

Everything, including our new merch that’s just been released, can be found at www.tiffanytwisted.info. You can drop us a message and also subscribe for news on upcoming releases there.

Surprisingly well – but we are introverts, so that helps. We have been working on completing demos for our debut album and managed to film a music video as well. This lockdown has actually given us an amazing opportunity to delve into the creative and production side of our new music, which may not have happened to the same extent if the world was still running like before.

How is lockdown affecting the music scene?

There’s actually both pros and cons for this one. It has driven more traffic onto streaming platforms and it has certainly caused a boom in live stream events. We’ve sort of jumped ahead a few years in terms of technology associated with live streaming and we’re even starting to see VR gigs popping up already. On the live front, however, it has been disastrous. We were lucky to play so many venues in London prior to this, as we’re now seeing a worrying amount having to close their doors permanently. The Black Heart in Camden has just recently managed to crowdfund just enough to keep them afloat, as they received no help at all from the government and they won’t be the only one.

Run by Foo Fighters. Adam was jamming the riff and we had to put it on!

Hetti: Our guitarist, Adam, was the first piece of the puzzle. We met after he heard some of my old tracks online and reached out. He told me he had already learned the guitar parts (within hours of finding them) but at the time he didn’t have any social media and no WhatsApp picture, so at first I thought he might just be a bit odd and trying to lure me to my death. I ended up taking my boyfriend at the time with me to meet him and it turned out he was just really really good! We then found our previous bassist, Harry, after he also found the music online and reached out. Our drummer, Jack, then joined us after his girlfriend worked as my make up artist for a shoot, so we all just clicked into place really.

We actually talk about this quite a lot and we are always coming up with new dream tour mates so it’s hard to choose. We did used to open all our sets, when we first started out, with ‘Let The Band Play’ by Badflower so opening for them would be sick.

We are desperate to get back into the studio. We’ve been writing all through the lockdown so we’re pretty overloaded with material that we’re keen to release, so that’s the next port of call for us. We’re also finally rescheduling and booking gigs as the lockdown eases, so we’re now just waiting to get all that pent up energy out on stage!

Definitely check out Badflower if you haven’t already. There is also this really sick New York band called Native Sun and an artist called nowHere, who really deserve a lot more love.