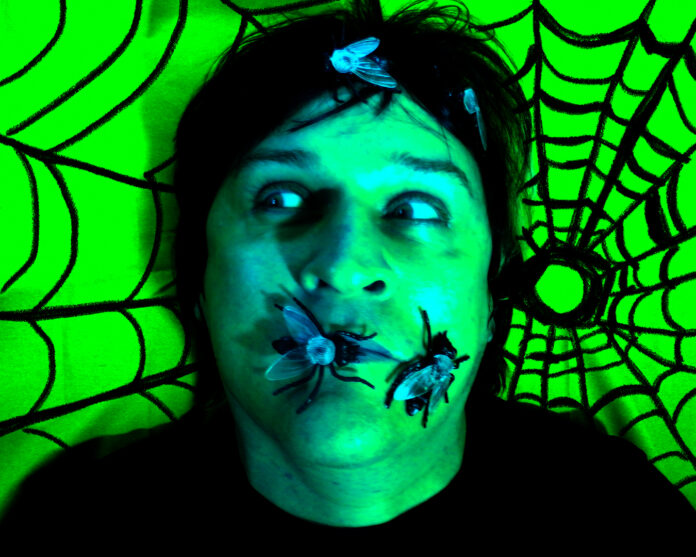 “Having been in several ‘meat and potato’ indie bands the last thing I wanted to serve was a shepherd’s pie” explains Alfie Enzo, the batshit crazy brainchild behind Leeds band Walt’s Frozen Head. “Hopefully, this is more poached eggs and trifle”. Take that as you will, but it’s best seen as an explanation and ethos behind Walt’s Frozen Head, and the myriad facets that combine to make them what they are.

In theory, it shouldn’t work, on paper however…

Taking as much influence from The League of Gentlemen and Terry Gilliam as from ‘60s psych and avant-garde pop, the Leeds band are genuinely offering something different. Following on from the release of their eponymous debut single, Walt’s Frozen Head return with another delicious slice of something completely different.

“‘Mungo Take A Ride’ is a deceiving little ditty. This seemingly playful slice of whimsy has a crafty dark side… the lyrics spit more venom than a cobra in a tumble dryer. Our protagonist nurses his decaying soul and obsesses on the factors that played their part.  The working title was “The Shits That Won’t Flush”

All sane people recognise Trump as a dangerous megalomaniac, but it’s the little Trumps that can be the most pungent; the shits in our immediate worlds that promote abject feelings of disdain and despair by using power to be personal. With juxtaposition referencing pop songs from happier times with a dollop of pitch-black humour, the result is a chaotic schizophrenic finger buffet.

For everyone who has been made to feel expendable this toe-tapping bouquet of scorn is for you.  Beware you little shits; Walt is armed with a plunger and toilet duck and he’s sniffed you out… Please,  Mungo Take A Ride.”

Thanks for taking time to answer our questions; can you tell us a bit about Walt’s Frozen Head?

I was searching for a particular type of music that incorporated art pop/rock, whimsical 60’s psychedelia, outsider music and dark cartoony elements. While a few acts came close to what I was looking for I realised that the specific blend didn’t exist… maybe I was looking for a contemporary Bonzo Dog Do Dah Band. In the end I thought I’d put something together and have a go myself.

The whole project is pro experimentation and accepts failed experiments are part of the process. Anything goes, be it screaming, barking or even singing underwater (there is footage of this somewhere)!

The past 12 months have been pretty weird for everyone. What’s it been like for WFH personally? Any lockdown coping mechanisms you wanna share?

I think initially, lockdown felt like a holiday. The sun was out and I was cracking the beer open at lunchtime. After a few days of that I joined the massive queue at Homebase and got on with some decorating. It’s a miracle my hair hasn’t fallen out due to excessive dyeing (it’s currently a bit Cruella Deville). Once the novelty wore off I threw myself into writing new material. That was my real key to getting through. There are now plenty of new songs for the next stage. After two months of lockdown I was back to the day job and that was that. So yeah… write songs, paint the walls and dye your hair are my top tips.

First of all the project is absolutely a team effort. A fantastic group of musicians/friends are involved: Sam Goulding, Sam Boothman, Jamie Hogg and Rob Burnel. As you get older, jobs, relationships and children and other external factors make a full commitment to a band rather difficult. If a living wage was on the table for band members working on the project, things may be different. As you know, artists far more successful than me struggle financially. So between us all we make it work. Other key collaborators are Melissa Banks who does all the artwork and videos, which are a massive part of the project. Also Mickey Dale who produces, engineers the recording and encourages the experimental antics of the project. So it’s a powerhouse of talent.

As for the creative process, I’m initially melody driven, so once I have a few chords and a strong tune, I jam it out with the band. The general vibe will suggest a lyrical theme, often tweaking the words right to the last minute. Then begins the recording and experimenting. Anything goes at this point and deciding what to lose from the mix the hardest part.

A massive creative change was braving singing the lead vocals. I’ve always written the songs for the previous bands but didn’t believe my voice was strong enough. Now I realise that being a technically great singer isn’t essential. Many of my favourite singers aren’t technically good (Bob Dylan, Robert Smith, Morrissey, Ian Dury, Jarvis Cocker, David Byrne, Nick Cave, Leonard Cohen etc). As long as I could get the right energy and character, I was in with a chance!

Creatively you seem to have been on something of a roll despite restrictions, with a handful of tracks being released over the last 6 months complete. Have there been any issues have you come across that would ‘t have been a problem under normal circumstances?

It’s been incredibly frustrating having to cancel recording sessions and rehearsals due to the different lockdowns. Trying to promote a new project without live performances is very difficult. All we could do is make good videos to spark and sustain interest and keep writing.

You’ve just released your latest single Mungo Take A Ride. Can you talk us through that and the video?

The subject matter is quite dark. The central character is trapped in a mundane life that revolves around a job where he feels expendable and undervalued. He suffers intense melancholy, realises there’s been a loss of spirit and hope, and goes mad as a result. The song ends euphorically as he experiences a rebirth as he turns his sadness into art. The video represents this narrative with abstract art and dark humour. It’s not autobiographical… honest m’lud!

How has it been trying to promote new music currently? Any hurdles you’ve had to get over.

As you know it’s all about the live shows these days. So many bands are putting off releasing music until they can promote it live. There’s going to be an avalanche of releases and gigs when this is all over. We had started to rehearse for a live stream show and the lockdown stopped the rehearsal. The only thing we could do was make great videos and try to secure any airtime and radio play. Social media and interacting with the audience by giving them constant content has been important too.

Do you think there have been any positives to be found in the lockdowns and various setbacks faces by bands recently?

At the risk of repeating myself I think having time to write is the main positive. Having time to watch, listen and read all the great stuff that’s out there as source of inspiration.

Everybody knows the importance of publicity. Any bands you’ve been listening to lately you think we should be checking out?

What’s the piece of advice regarding the industry that you wished you’d been given earlier.

If you are committed and serious about your music don’t let others waste your time. If you’re a songwriter, work at your voice as it helps in so many ways. Listen to advice from other creative people. Be careful taking advice from non- creative people, as they will probably advise you to treat your passion as a hobby and steer you down the wrong path… a more sensible path as they see it.

Finally, as the year progresses and restrictions hopefully ease, what can we expect from WFH over the rest of 2021?

First thing will be to get in the rehearsal room and do the live stream. Then grab any gigs we can to get the show up to speed. The EP will be out in May and I’m hoping to start pre-production on the album soon. Good times ahoy!