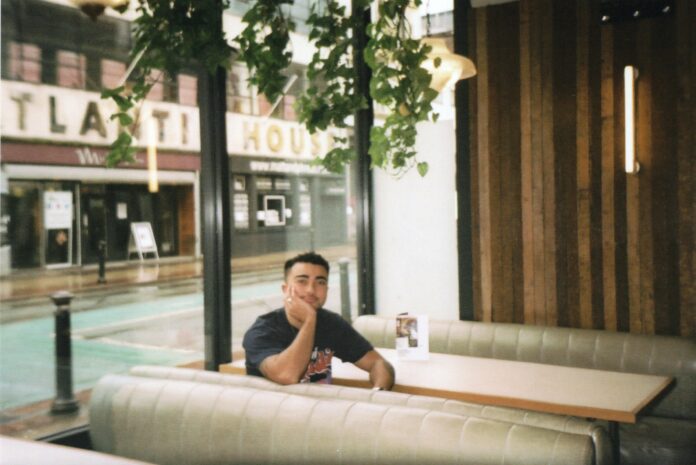 ALEX LUKE is a soulful Singer – Songwriter, multi-instrumentalist and producer from Manchester, UK.

Influenced by Soul, Blues, Jazz and Pop, with sounds similar to the likes of Hozier, Michael Kiwanuka and Joy Crookes. He takes his approach to songwriting with his heart on his sleeve and the voice of an old soul, not unlike his main inspiration Amy Winehouse.

After Alex’s brother passed in 2015, he turned to his music for solace and took his brothers middle name ‘LUKE’, a means of keeping his memory alive. Graduating in his degree at The British and Irish Modern Music Institute (Tom Odell, James Bay, Izzy Bizu, Ella Mai), Alex sets to take his story further than ever before within a new era of music. His personal songs and natural aura on stage has earned him a following of lovers of Joy Crookes, Tom Misch and Loyle Carner.

Alex’s latest single ‘HIDEAWAY’, portrays his development as an artist, while giving a hint at the future direction of his music. From its unquestionable captivating hooks, deep resonating authenticity, and Pop Blues stylings, there’s no doubt he will be on the rise in 2021.

“HIDEAWAY is about when you’ve first met someone in relationship, and you can’t stop thinking about them.” Luke explains. “It’s like they’ve left this mark on you that’s with you wherever you go, there’s this exciting emotion, mixed with an element of self-doubt, in that you don’t know if these feelings will be reciprocated”

We cauhgt up with Alex following the track’s release:

I started learning guitar when I was 5, from there the love for music just grew. As I got older I really fell in love with Hip-Hop, I started writing lyrics when I was 13. Then I fell in love with artists like Paul Weller, Amy Winehouse, Nina Simone and bands like Kings Of Leon. So I was taking in inspiration from different genres. I decided to study music production and engineering at college and then songwriting at university. So It’s been an ever evolving process.

I think it would have to be Michael Kiwanuka. I’m a huge fan of his and I’ve followed him for years, he’s been a big inspiration of mine.

Hopefully back to playing live! I think I’ve developed as an artist throughout lockdown and I can’t wait to play some new material live with my band.

I have a talent of remembering quotes from films, usually funny ones. I recite them in conversations with my friends if the opportunity comes up. I don’t know if you can call that a talent. Recently I seem to have the talent of killing my house plants, but I’m working on that.

I’d like to see more opportunities for unsigned up and coming artists. Lockdown has been an obstacle for a-lot of the industry and unsigned artists like myself have been hit hard. So better opportunities for new talent would be really beneficial in helping us continue to grow.

Maverick Sabre has been a big inspiration of mine since I was 13, that’d be amazing to work with him. Also Loyle Carner and Joy Crookes, I’ve followed them both for years now and their music resonates a-lot with me. Sorry I couldn’t choose just one, that’s a hard question!

My last headline gig in Manchester. It was just before lockdown, It sold out and it was such a great gig. It was the first and only time my Grandad got to see me play live, so it’ll always be special to me.

Water and Rum and coke. Maybe a dominoes.

Ottolenghi by Loyle Carner & Jordan Rakei. Jordan is a great artist and producer and I’ve learnt a lot from his production videos he started doing throughout lockdown.

I wrote, produced and mixed Hideaway at my home studio. I made it throughout lockdown and it was a really fun process. I wanted to experiment with new sounds and create something unique. Hideaway is about those first moments in a relationship and the mix of emotions that can come with it. It asks for honesty, from yourself and the person you’re with and it’s an expression of the mark that someone can leave on you.

The MUSIC LIFESTYLE blog you need in your life