Introduing The Steady Letters and Their New Single ‘The Blue 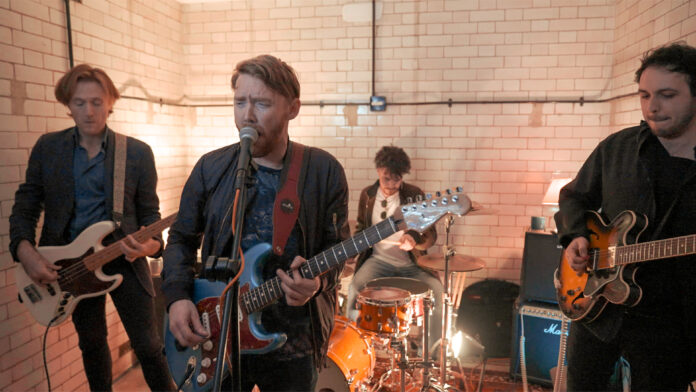 Mining a rich vein of rock ‘n’ roll through the ages, London four-piece The Steady Letters have exploded out of their scene almost instantaneously.

Drawing comparisons to the likes of The Black Keys, Royal Blood and The White Stripes, there’s a dirty and dust-caked air of Americana around the band that’s offset by a distinctly British approach to their lyricism.

It’s this amalgamation of heavy grooves and kitchen-sink lyricism more akin to Arctic Monkeys that has stood The Steady Letters in such good stead, and seen them take to the stage at legendary London venues such as Nambucca and Water Rats – where they supported Welsh hard-rockers Himalayas. It’s not just on stage where the band have turned heads however, with previous singles earning them favour with various tastemakers, including BBC Introducing.

The band’s latest single, ‘The Blue’ is three and half minutes of angular riffs, thunderous percussion, all tied off with lead singer Joe Bayley’s inimitable vocal.

“The Blue is that place we’re all searching for where our imaginations are free and the shackles of modern life don’t seem so heavy.” Explains Bayley. “Rather than being a dream on the horizon however, – it’s about a feeling we can all embrace right now, in this moment, and let ourselves go.”

Indeed, that feeling of liberation and escapism runs riot through The Blue, mounting steadily as the track progresses before coming to a head in a beautifully expansive and cathartic conclusion.

We caught up with the band for a chat:

The Blue is about throwing off all the shackles we currently have on our lives learning to be free, right  here, in the moment. There’s an amazing music video out 6 May with the same message.

We produced this new single and a music video for it over lockdown so we’re making music out of it!

To pass on to people the feeling that music gave us all growing up- inspiration, hope, and loud guitars.

Usually it’s a bit of both- a riff or a few chords which inspire the main lyrics or melody of the song. If  if it’s good then we build the whole song around that moment.

Better equity for artists from streaming platforms- which is why you can also buy our new single on  Bandcamp.

A huge gig single release gig / party with everyone we know, and hopefully then an album!

If you could collaborate with any band / person / producer who would it be? We’d get Josh Homme or Rick Ruben to produce our album, so we can spend as much Bme in the studio with  them as possible

Where can we find out more? (also flog us some merch we love tees…..) https://linktr.ee/thesteadyletters – we have a longer bio on Spotify and you can check out our previous two singles ‘Animals’ and ‘Tokyo’.