Karima Francis is a critically acclaimed musician and songwriter, renowned for her innate ability to blend haunting melodies with honest lyrics and alluring ambiance.

With an ear for music evident from an early age, Karima went on to release her debut album ‘The Author’ in 2009 to widespread critical acclaim. Her consequent album’s ‘The Remedy’ (2012) and ‘Black’ (2016) witnessed further acknowledgment of her artistic abilities and saw her truly begin to spread her wings. Her journey to date has found her playing on Later… With Jools Holland, supporting the likes of Paul Simon, Amy Winehouse and The Stereophonics, as well as working with renowned producer Flood (Nine Inch Nails, Nick Cave, PJ Harvey, Depeche Mode).

Making a welcome return to the spotlight, the singer-songwriter from Blackpool delivers an atmospheric and elegiac single for the soul, that emerges as her first new material of 2020. Wrapt in a haze of misty atmospherics and languid acoustics, at its heart ‘Orange Rose’ is a love song straight and true. Though like almost all love stories, this one is not without its complications. Offering wistful rumination on how mental health can send shockwaves through even the most intimate and entwined of relationships, ‘Orange Rose’ sees Karima strike a masterful balance of meditative and melancholy songwriting.  Produced by Tim Carr, the track was further mastered by Grammy-nominated Phillip Shaw Bova (Andy Shauf, Father John Misty).

Northern Revive: Please Introduce yourself in less than 10 words…..

KF: Music got into me if I’m honest. As soon as I roughed the drums, I knew this is what I was going to do with my life. That and the drummer John Densmore Dave Grohl.

NR: What’s the writing process, as your a multi instrumentalist what comes first lyrics or music?

KF: It’s changed a lot as I’ve gotten older. I now can sometimes start with the lyrics or a vocal melody then build around that. I think it’s different every time.

KF: The studio process is different every time, it was always so hard for a producer to capture what I did live and transfer that. I still don’t think that my live performance has been achieved yet, so now I try to tone things down on records and keep the energy for the live shows.

NR: What has been the greatest gig in your career and why?

KF: I loved playing at Hammersmith Apollo when I was 20. The sound in there was stunning, and I felt so free on stage like I was floating. I never wanted that feeling to end.

KF: God in Chicago by Craig Finn, my best friend, shared it with me the other night. My friend is my music curator. 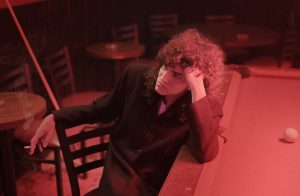 KF: More mental health support within the workplace. I know now there have been improvements, but there is still so far to go. I was very sick on my first album, and I almost died. I and management had to keep it a secret, in fear of how the labels would respond. In the end, my health caused my record to get dropped; this affected my career and self-confidence still to this day. There was no follow up from any of the record labels, that was just was, and you just had to deal with it.

99% of artists signed to major labels get dropped every year. I want to change the support network within the music industry and the workplace, for managers, A&R and workers as well as artists. We’ve lost too many people to mental health. Those getting into the recording industry make sure you have a team around you that support you 100%.

NR: After 10 years in the industry how have things changed?

KF: Things have changed massively. It’s gone from being a Major recording industry with big record deals to now, where it’s cool to independent and self-released music. Also, with the rise of social media, music is so focused on online presence now. Don’t get me wrong I love social media for educational interests, excellent for educational use but it’s hard to manage full time and be an independent artist, it’s like a full-time job within a fulltime job, which can be distracting. It’s strange that we now validate ourselves based on the number of likes we get.

KF: To go back to school, I’ve been studying a degree, and I love it!

NR: How are you coping with lockdown and how is lock down effecting the music scene?

KF: The lockdown is full of uncertainty for us musicians for sure. People have been incredible in adapting to the circumstances. Many people have been doing live shows online and putting on events to generate an income.

Also, it’s given people much time to write and focus on their art. I can imagine a lot of great records are going to come out of this.

KF: I hope to set up some live dates and get out on the road. Head back out to LA to continue working on new material. Go on holiday somewhere on the beach and be around nature.

NR: Talk us through the new track and video?

KF: The video was filmed out in Las Vegas with my videographer Joseph Chiln. The film is about a night of destructive behaviour.

I made the track out in LA with my producer Tim Carr. I’m pleased with it and had so much fun making it!