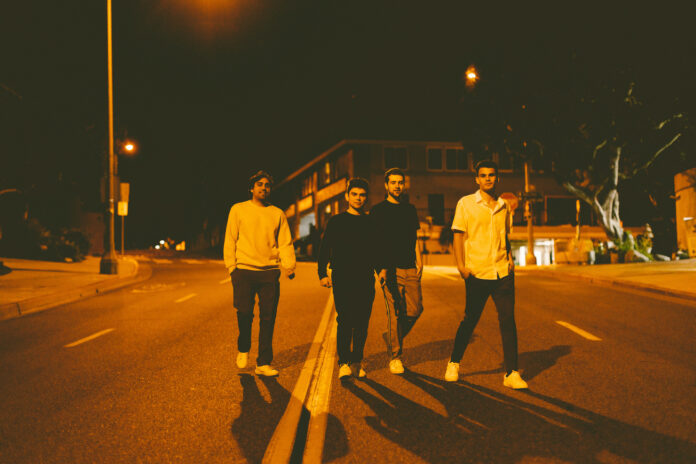 Los Angeles based outfit LOVE LIGHTS DRIVING return with the radio edit for legendary single ‘Bandana’. Composed of Nathan Reyes (vocals, guitar), Josh Kindla (guitar), Ernie Montaño (bass) and Diego Briones (drums), the quartet met at high school and at a musicians conference in LA, and the rest is simply history. Back with the exceptional indie-pop offering, ‘Bandana’ was self-produced, and made with computer samples, as well as live instrument studio recordings.

Introduce yourself in less than 10 words.

An LA band that made a genre called Pocket Pop.

The last song we played on Spotify was ‘Que Beleza’ by Tim Maia.

What are some other artists you currently need to check out? Fijitrip! Norwegian artist making some seriously cool tunes.

OC is very tight-knit for indie bands. Everybody kind of knows everyone in their circle. LA is a bit more spread out and thus a bit more of a hit or miss type of place to play a show at. Nonetheless,  Southern California as a whole offers a really good layout for indie musicians.

Diego (Drummer) and Nathan (Vocalist) have known each other since they were 13 years old when they met in High School. Josh (Guitarist) met Diego at a music conference in 2016 and Ernie has known Diego and Nathan since 2012 as they all went to the same school.

Before COVID, we played NothingFest at GardenAMP. It was the first time playing some of the stuff we currently have been releasing and it was great to see the receptiveness of the audience.

With regard to music, “Keep it simple.”

What other talents do you have? (kazoo playing, champion toast burner…._

Nathan could easily be a professional whistler. Seriously, he’s one of the best whistlers you’ll ever meet. Just ask anyone who knows him.

We would definitely love to open for Young the Giant. They’ve been a huge inspiration for us since we were teenagers.