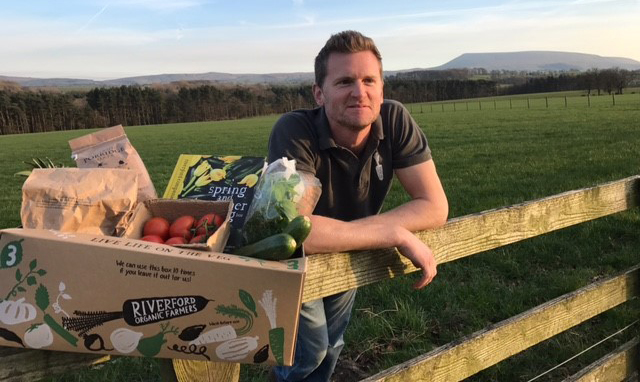 Charlie Bush is a man on a mission to get our county living life on the veg. He’s been talking up the green stuff on the doorstep as he delivers organic veg to families from Lancaster to Bolton, Burnley to Blackpool for five years now, but what is it about veg that gets his pulse racing?

“I grew up on home-grown veg; as my parents are gardeners we always had a kitchen brimming with the stuff. They would often be out in the garden until late at night and if I was going to eat I had to cook it for myself! It meant that I had a brilliant grounding in home cooking proper veg from scratch.”

Charlie’s passion for healthy, home grown produce continued into his adult life but was suffocated by years of slogging it out in the city and not living the lifestyle he grew up with. His interest in good food was reignited however when he had his first child.

“I, like many others, began to question the quality of food supplied by larger retailers. I was fed up of reading ingredient labels longer than my arm, that listed unnecessary additives and preservatives, colourings and sweeteners. I didn’t want my children eating anything that wasn’t going to help them thrive. There’s also the impact of intensive farming on the environment to consider, and how that would affect their future too.”

So choosing to turn his back on his career in advertising, Charlie channelled his energy into setting up a local organic veg box scheme, something that had always been a dream of his.

“When I moved out of the city to the greener climes of Gisburn, Lancashire, where I now live with my wife and three sons, it was the perfect opportunity to have a go. Unfortunately I couldn’t find the right suppliers, and hardly any organic produce.”

Salvation came in the shape of a franchise of Riverford Organic Farmers, who had recently started up an organic farming partnership in Yorkshire. The UK’s biggest 100% organic veg box scheme was looking for someone as obsessed with veg as they were who could lead the establishment of the East Lancashire business, so it was a perfect fit.

“After two years, the West Lancashire territory came up for sale. It was another easy decision and it wasn’t long before I became Riverford Lancashire – one of the largest Riverford territories in the country.” 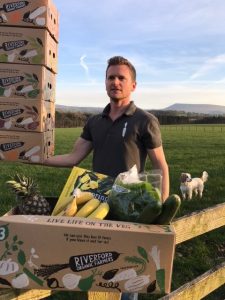 Since starting the business from scratch, Charlie has built up a loyal band of 900 customers who know they can turn to him for help with everything from kohl rabi to cabbage, broad beans to spinach and everything in between. With a team of three loyal, veg-obsessed drivers that operate out of his ‘veg hub’ in Burnley, Charlie is slowly but surely transforming the dinner times of families across the county. Making the deliveries is not always plain sailing though.

“Last winter I got the van stuck in the snow and had to carry the veg box half a mile to the house – and then spent the rest of the morning digging the van out with the help of two other customers! The Riverford community here really is something special.”

As well as delivering his iconic veg boxes, Charlie speaks at nutrition seminars, WI groups and attends shows across the county where he encourages people to, as he puts it, “Live Life on the Veg” with him. As a father himself, he is especially keen to help parents and children into veg.

“I am passionate about educating more kids about where their food comes from, how they can tell the difference between an onion and a shallot or a celeriac and swede…I want kids to experience the joy my kids get from eating fruit and veg that actually tastes of something rather than the watery mess you get from the supermarket. It’s not surprising parents struggle to get their kids to eat their 5-10 a day. Organic food is grown slowly in soil the natural way – it really does taste different, and of course there are no chemical pesticide residues to worry about.”

Several schools in the region have signed up to The Riverford veg fund, where Riverford donates £15 to the school for every customer that signs up for a veg box.

Riverford is also working with the Lancashire Wildlife Trust to raise money through a similar scheme.

So by eating well with Riverford you can help more than just your family.

With 115,000 veg box deliveries under his belt, Charlie still has some big veg-shaped targets in mind for the future too. “I want to be delivering to 1000 customers a week and to grow the business further north into the Lake District.”