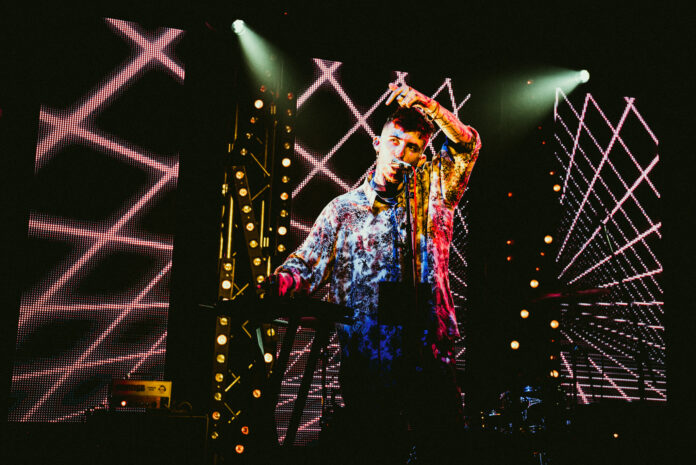 Though Manchester is a creative and in fact supportive city, one’s creativity can soon feel stifled when working with other people and their opinions and compromise enter the equation.

This is exactly what happened to Spencer Mason, who, having spent the last three years both playing in and fronting various bands across the city, has opted to strike solo with his new project GhostStory..

It’s a move which has allowed the Scottish-born poet and musician to take complete creative control of his output. From inception through to execution, every decision has been his own. Something which has allowed Mason to create the inimitable and idiosyncratic aesthetic that GhostStory. relishes in. Combining uncompromising industrial electronic beats with a spoken word delivery somewhat akin to the likes of Kae Tempest or Scroobius Pip, it’s an amalgamation not for the faint hearted.

Often drawing on his real-life experiences, as well as more esoteric interests such as Greek mythology in debut release ‘Prometheus’, the lyrics of every GhostStory. track can be seen to resonate throughout our own life experiences, allowing Spencer to communicate with his audience while telling the narrative of his own life.

Indeed, it’s these experiences which form both the backbone, and the heart of The Re-Dream­ EP. Itself a short concept EP; a three part examination of how mental health (in particular, psychosis, drug addiction) impacts relationships with the self, with loved ones, and the outer world. How mental health systems don’t accommodate for mental health, how stigma and empathy campaigns can end up putting more strain on relationships, and how everyday exposure with the 21st century can cause daily turmoil.

We caught up with Spencer again following the EP’s release:

Hi Spencer. Thanks again for taking the time to answer our questions. How’s it going?

I’m doing alright thanks. Better now uni’s finished and I have some sun in my skin.

It’s only been a matter of months since we last caught up. The obvious aside, what have you been upto in that time?

Everything and nothing. Finishing uni obviously and writing/producing music and other bits of work. Trying to re-find my feet a little among the madness. Though I think I’ve officially completed Netflix.

You’ve also just released your Re-Dream Trilogy. Can you tell us a bit about it?

It’s a short concept EP about mental health with mixes that I could do better now. But the rawness is the point – you can quote me for being pretentious if you have to. It’s about how mental health impacts varying aspects of our lives and problems don’t have straight forward solutions or natures.

Was the concept of releasing a trilogy of sorts always in your mind or did it come about
organically?

Orinially it was a double a-side with Re-Dream and The Attempt. To be honest, I had wrote Section II off the back producing the other two tracks and when me and Oli (my manager) came to sort distribution, it was the same cost to upload 3 tracks instead of 2. I figured Section II would be a live track or a bonus song, so it was a nice surprise for it to fit snugly into the collection.

Each track feels sonically different from the next. Was this a deliberate way to showcase different sides to the project, or again, was it an organic occurrence?

Probably more organic. It felt right that they should have different textures so they could feel like different worlds involved in mental health. But the writing processes were totally different – first I just wanted to make a gurn-invoking bass, then The Attempt was written for a band recording in mind and previously gigged with Incarnate., and Section II was something I strummed out when I was shattered and fed up with the project. Sonically I wanted it to feel like those different mindsets that the mind can take on when dealing with things.

In our previous chat you said “The intention of GhostStory is to continually find the best sonic landscape depending [on what will] fit the creative architecture”. Is that still the case with the Re-Dream trilogy and if so how?

That’s absolutely still the case. The tracks for these lyrics had to be intense, raw and in your face because the lyrical content was pretty close to the bone. Re-Dream is about finally dealing with the consequences of surviving attempts at suicide, making a decision that you have to accept that being alive means building up to not running away anymore.
The next releases will be totally different.

You’ve previously talked about trying to find a balance between writing about your experiences with mental health, and focusing on other topics. How have you found that?

You also mentioned your dissertation, how has that been going for you?

It was depressing. I did it on the gentrification of the music industry. We’re all gubbed x

Finally, is there anything else in the pipeline you want to tease our readers with?