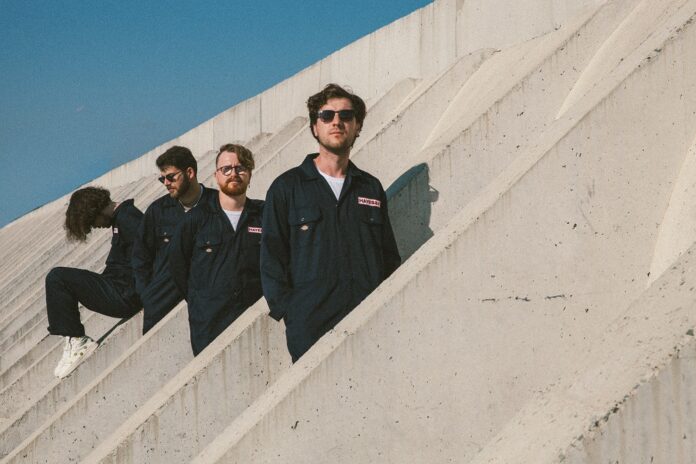 It goes without saying that the last 18 months has been difficult for everyone. The music industry especially has been hit hard, with venues and behind-the-scenes staff arguably suffering the most.

In that sense however their plight has also been the one given most attention, with very little given to the bands its affected also. That’s where Manchester-based Hayes & Y come in.

Coming quickly off the back of their previously well received single ‘How to Say No’, ‘I Never Give Up (It’s Never Enough)’, is the band’s latest single, and sees them exploring the impact the Coronavirus pandemic has had not just on themselves as musicians, but the bands and artists around them also.

“’I Never Give Up (It’s Never Enough)’ is an extension of the exhaustion every artist feels from time to time” explains frontman Blagoslav Anastasov. “The last couple of years have been particularly hard for our trade and I’ve seen so many bands break up recently. It’s about the balance between ambition and satisfaction, something that I’ve personally found very challenging.”

Indeed, having already won over the hearts of their native Bulgaria, and now turning heads in the UK, it’s just as well the band haven’t given up. But while their drive and determination have got them this far, at what cost? ‘I Never Give Up’ seeks to explore the difficulty in finding that balance, while asking the question of when is it actually enough?

The new single “I Never Give Up (It’s Never Enough)” is a 70s inspired track, which we hope will make you dance right away. We were aiming for that kind of vibe, taking inspiration from artists like David Bowie and The Rolling Stones, and are quite happy with the result. The video shows a movie set, where we find both the director and the actors trying to get the best out of them, but… it’s never enough. Overall, the track is about finding that balance between personal ambition and satisfaction.

What have you achieved since we last had you in Northern Revive?

We’ve had a very productive period, this is our 5th single to come out in 2021 and we’re hoping we’ll be putting out one more till the end of the year. We were also lucky enough to have the chance to play live this summer on our local BG tour, which gets more and more successful every year. We definitely needed that boost and energy from the shows, it’s irreplaceable.

How do you think your music has developed?

As already mentioned, we are trying to make songs that get people dancing and having a good time. “The Times” was a song that was very well accepted, our “apocalyptic disco tune”. We’re very excited for the new single and what we can achieve with it. We always try to explore new territories with our music, our track “Epiphany” from earlier this year is a good example.

In the band we listen to various artists in different genres, so it’s always a mixture of influences, usually different for every tune we are making. Recently, it’s been classic bands and songs from the 70s, but we’ve had so many bands before like Parcels, The 1975, HAIM, etc.

Tell us about the release artwork?

The artworks is once again done by our graphic designer Sophia Dobreva, she takes care of all of our visual work. For the last two singles, she took a more minimalistic approach for the artworks and we love it.

As with every independent artist, the pandemic was and still is a challenging time for us, but we hope things will get back on track very soon. We managed to stay active and release new music, which was very important for us during these difficult times. Better days are ahead, we’re confident of that.

We record most of our music at home, which allows us to take our time, find the best choices for every instrument and lay down the best performance. This approach has worked well for us for a few years now, so it’s fair to say that we use the energy from the live shows into the ideas themselves, rather than the recording process. It’s always nice to see happy people sing along to your songs, it gives you confidence for the next ones.

Every step along the road is important, so we never settle and are looking forward to the next one. Motivation is a driving force for us, we set our goals carefully and work towards achieving them as soon as possible.

Favourite venue and why?

In Bulgaria, we love playing in one of the seaside cities there- Varna. The venue is right on the beach, the stage is built on the sand, so the view is spectacular and the crowd is always on fire. In Manchester, we love Band On The Wall, Night & Day Cafe and many more.

Did you go down the streamed gigs route in the Pandemic? And why?

We didn’t play a streamed show, we felt it wasn’t even close to the energy and interaction you get with the audience on an actual concert. We patiently waited for the opportunity to play in front of people again and that’s the best feeling there is.