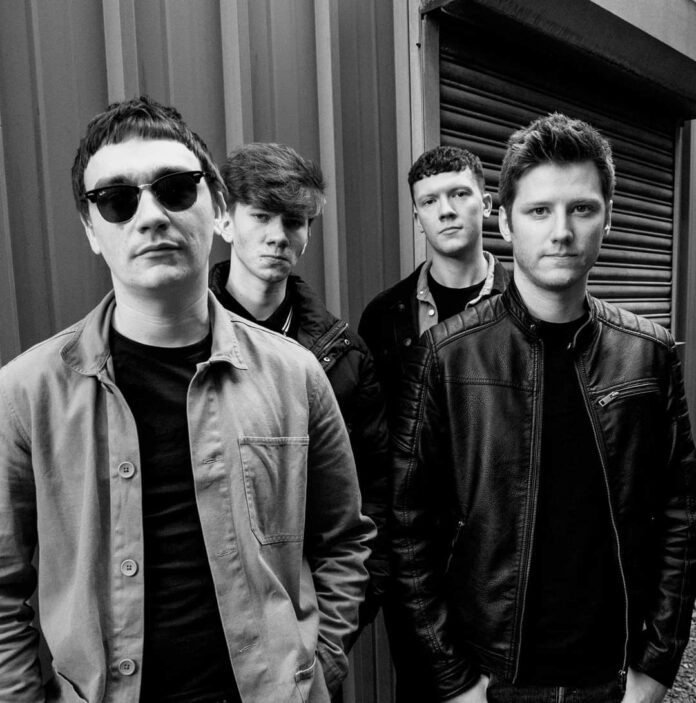 Hollows are a 4-piece Alternative/Indie band based in Manchester. Singer and guitarist Sean Davies formed the band in early 2017 with the release of their debut single and E.P following shortly after.

With some original members moving on to other projects, Hollows were joined by drummer Dan Dyson, bassist Jack Barnes and finally lead guitarist Liam Lewis as of 2021. The Cure, Joy Division, Kings Of Leon, The Killers, Radiohead, Red Hot Chili Peppers and Fleetwood Mac are only a handful of the band’s influences despite live reviews delivering comparisons to Placebo and Smashing Pumpkins.

During a challenging 18 months for everyone, Hollows have made the most of their time by writing and recording new material to be released this year. The band’s discography is available to stream on most streaming platforms and also available to buy via their bandcamp store.

UV Lights is a based around a night out with mates where little arguments and fall outs start coming to light because of the drink. “Mistakes won’t function you know? Hidden in plain sight under UV Lights” is a line that describes an argument on a dancefloor.

Please Introduce yourself in less than 10 words…

We are Hollows, based in Manchester, we love playing gigs.

(Jack) Strange but unique, I was on holiday at a place I virtually call home. A band was playing that evening and me, being completely uninterested in music up to this point, fell in love. Something just clicked and it’s hard to describe what. I’ve done it ever since that day so something clearly happened.

(Sean) There was always music on in my house, mainly alternative indie and rock bands but also some motown, ska and northern soul music. I remember being picked up at a young age by my Mum when she used to make me dance with her to The Contours and Toots and the Maytals.

(Dan) Mum & Dad, they always had the radio on in the house or the car. Dad dabbled in drums when he was younger so he got me into playing them as well from pretty early on. I knew I wanted it full-time at a Foo Fighters gig.

Dan – Sean normally has a tonne of lyric ideas that he will find fit with ideas we throw around in practice but then as you keep writing, songs or lyrics change and can take a whole new shape. It’s really fluid.

Jack – There is never a set formula. Music comes from feeling; some days you’re in a rut; others you are writing an absolute tune.

Liam – For me I work on the two separately. I have a hard drive full of pro tools sessions with full instrumentation, drums, bass, guitar, keys – and I have a book full of words and lyrics. I’ll dip into the book for any demos that make it far enough in the writing process.

Sean – It’s a bit of both as it varies. But the lyrics for me are the most important part, I can’t really get into a song if the lyrics aren’t saying something or from the heart.

Life, love, loss, all that nonsense.

Who is the most annoying band member?

Our sell out show at Gullivers in Manchester was incredible. To come back from the stresses of Lockdown and play to friends, family, and some new faces was so cathartic for us.

(Liam) For me, it’s the other way round. I try to think of how we can embellish and build on what we’ve recorded in a way that’s captivating, but true to the original track.

The build-up, the adrenaline rush, the sense of adventure that comes from 4 lads jumping in a car and just seeing what happens.

Phenomenal. It still doesn’t feel real. We’ve absolutely loved making the most of gigs being back this year, either playing them or going to see other artists again.