The Metal Byrds are a USA alternative rock band, a riotous 21st century reload to a time where female front-women, like Pat Benatar, Blondie and Joan Jett, dominated the radio waves with rocking sounds. Moreover, the Metal Byrds’s single “Dreamin” is set for release on 2nd this October.

They salute the time where Classic Rock & Roll ruled the world. UK-based, Suzanne Birdie, has a power-pop rock voice that compliments Texas based, Sly Rye’s, ripping rock riffs and lead guitar solos in every song! The band has charted on many USA and Indie rock radio stations, and now hits UK radio this September. Moreover, the Metal Byrds’s single “Dreamin” comes from the forthcoming album “Life In 20”, released through band camp at the end of September. Therefore, find more about the band from our exclusive interview with its members.

Here is Our Exclusive Interview with Metal Byrds

TMB: As a band, all of us have always been into music. Suzanne, the lead singer, started off singing in church as a small girl. Rye, the guitar player, picked up his first guitar at age 9. Kevin, a bass player, started playing at age 11. Moreover, he was on his school choir. Alex, the drummer, got his first kit from his parents at age 2 because he was always banging
on pots and pans.

TMB: Suzanne and Rye write all the songs. Usually, they write from their
experiences and what is currently going on in their lives at the moment.

TMB: It’s a totally different energy. Everyone has their own way of dealing with the studio. It’s much more tame and almost boring, having to do take after take to get things right. Also, on stage, it’s anything goes, raw power.

TMB: Music, definitely. Rye writes all the music, then collaborates with Suzanne on lyrics. She likes to have the box of the music to define how she senses the song.

TMB: Suzanne and Rye met first, in 2017, at Rye’s rehearsal space with another
group. Afterwards, Suzanne asked if she could sing Sweet Child Of Mine by Guns N Roses, and after that, she was basically in the band. After some shake-ups not long after, Suzanne and Rye decided to go their own way, and start writing original songs. That’s when they knew they had something, and officially formed The Metal Byrds. Kevin and Alex have recently joined the band in the last couple of months since Covid started. We haven’t all performed live together yet, only in rehearsals. However, the chemistry is definitely there.

TMB: We played a gig at a party for one of Rye’s friends. It was on this beautiful farm in Austin last year, and we knew just about everyone there. Also, energy was great and Suzanne sang like a song byrd. The vibe was right, it was magical.

TMB: Other than ours, lol, it was an Indie playlist from one of our band friends, with a whole bunch of great indie rock songs.

TMB: Lol, for Suzanne it would be NO PICKLES in site. Other than that, nothing too complicated or extravagant, we don’t think.
NR: What other talents do you have?

TMB: Rye is the king of stubbing his toe, does that count? Suzanne can also play the flute, and Alex can dislocate his shoulder on command. Moreover, Suzanne is the queen of burping, believe it or not, lol.

TMB: Yes, I would change how now-a-days, everyone tries to lump bands into a specific GENRE. I get there are some bands who fit a genre quite well, but for some, like us, we are not just one type of music. We are a combination of several, and we make our music for ourselves, and what type of music we like. Therefore, our stuff ranges from metal to a pop edge, to even some consider our new song a country crossover. Most people don’t get it, and say we have no direction. However, we are not a bike path; we are a 5 lane highway that’s moving in the same direction.

TMB: I think Rye would say, Paul and Gene from KISS. They have such a defined and unique sound, and to be able to pick their brains after so many successful decades of doing this, would be a dream.

TMB: Keep pushing forward, and keep creating. It was
given to us by our US pr manager, Mike. Best advice we’ve gotten, and we keep reminding ourselves of it all the time.

NR: What’s the nicest thing that’s ever been written about you?

TMB: Suzanne actually got a tweet from a fan, that said, she is the best of all her ancestors. It made her cry. Moreover, she said that was the nicest thing anyone has ever said to her in her whole life.

TMB: Definitely KISS. That would be a fun and crazy show, and a huge fantasy of all of us. 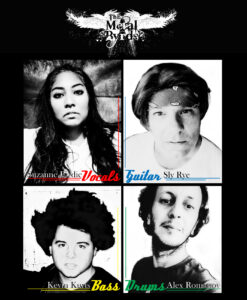 TMB: We have several good bands that we help out. However, the boys from WHITE HORSE are great.

NR: How have you carried on with the creative output in lockdown?

TMB: We have taken this time to continuously write new material and record new songs. It’s given us a time to slow down and process music better. Consequently, we feel our sound, from our first album, to now, has vastly improved because of it.

TMB: It’s sad that no one can play. Things are just starting to open back up. However, there is always a risk you take to play right now. Mainly the crowds are just not there. Right now, it’s not worth it to risk our health just to do a gig where only half or less of the people who normally come, will be there.

The Austin music scene is famous worldwide. Austin is known as the live music capital, and it really is. For instance, in a normal week, you can have anywhere from 200 to 400 shows all across the city and surrounding areas. All kinds of music too, from rock to country, to soul, jazz, pop, rap. Its all in Austin.

TMB: Our newest song, Dreamin, off our third studio album, Life In 20, is a raucous, slice of high energy, classic rock and roll. Suzanne delivers a power pop indie vocal , with ripping guitars and soaring riffs. This is 21st century reload of metal and rock.

TM: Where can we find out more? (also flog us some merch we love tees…..)

TMB: Finally, you can visit our website https://www.themetalbyrds.com/ to find out everything about us, and buy our music and merch (coming soon, we’re working on tshirts now), see when our upcoming shows will be, a getto know a little more about the band. Additionally, you can  follow us on Twitter @TheMetalByrds, and Facebook @TheMetalByrdsBand, and on YouTube on our channel The Metal Byrds.